Please ensure Javascript is enabled for purposes of website accessibility
Log In Help Join The Motley Fool
Free Article Join Over 1 Million Premium Members And Get More In-Depth Stock Guidance and Research
By Timothy Green – Feb 11, 2015 at 8:43AM

Amazon appears to be a cash flow machine. Think again.

Bullish arguments for Amazon.com (AMZN -1.57%) invariably boil down to pointing out the company's seemingly robust cash flow generation. In 2014, while net income was negative, Amazon produced a staggering $6.8 billion in operating cash flow and nearly $2 billion in free cash flow. It's no surprise that these two numbers are touted at the very beginning of a typical Amazon earnings release, well before the net losses are mentioned.

Bullish Amazon articles almost always contain a chart that looks something like this: 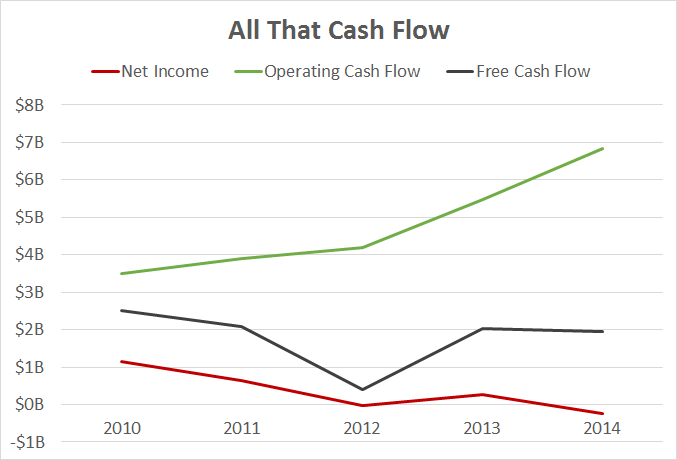 Net income, the argument goes, doesn't matter, since Amazon is producing so much cash flow.

It turns out that this couldn't be further from the truth. Amazon's cash flow is an illusion, and it has no bearing whatsoever on the profitability of the company. Investing in Amazon based on its cash flow is an enormous mistake. To understand why, we first need to figure out where all of this operating cash flow is coming from.

The source of Amazon's cash flow
The table below shows the components that made up Amazon's operating cash flow in both 2010 and 2014. It's split into three categories: net income, depreciation, and everything else, which includes stock based compensation and changes in working capital.

Where is all of this depreciation coming from? We know that Amazon has been building plenty of distribution centers for its retail business, but it can't possibly be from these. Buildings are depreciated over a long period of time, as long as 40 years. Even if all $22.7 billion that Amazon has spent over the past five years, through both direct capital expenditures and capital leases, went toward distribution centers, this would have only produced additional annual depreciation of about $570 million, assuming a 40 year depreciation schedule.

This depreciation has to be coming from assets that are depreciated very quickly, perhaps over only a few years, and the only thing that fits the bill is Amazon Web Services, or AWS. Amazon depreciates servers over three years, and we know that Amazon is investing heavily in AWS. There is some spending on software, which is depreciated more quickly than buildings, but this only totaled $537 million in 2014, not enough to make much of a difference. Therefore, we can conclude that the bulk of this additional deprecation is coming from AWS-related assets.

We've learned two things. First, Amazon's operating cash flow has increased almost entirely due to rising depreciation. And second, nearly all of this additional deprecation is coming from AWS.

Why is this important? To find out, let's build a cloud computing company.

Partly cloudy, with a 90% chance of deception
I've raised some fictional money to start a fictional cloud computing company, DeceptiCloud. My plan is simple: in the first year, the company will spend $1 billion building out its cloud data center, selling the same types of services sold by other cloud infrastructure providers like AWS. In each following year, the company will ramp its spending by 50% -- it is a fast-growing industry, after all.

The company won't spend the entire $1 billion directly, though. Half of that total will be financed through capital leases, which will be paid off over the course of three years, the same amount of time it takes to fully depreciate the servers. This 50-50 split between normal capital expenditures and capital leases will remain the same each year.

My business has two main expenses: deprecation, which will be determined by the capital spending in previous years, and operating expenses, electricity, labor, etc, which for simplicity I'll assume to be 50% of my depreciation expense in any given year. This number isn't necessary to prove my point, but it makes the model more realistic.

After the first year DeceptiCloud is in operation, the company only brings in enough revenue to cover 95% of its annual expenses. No worries – fast growing companies can't be expected to turn a profit, after all. The company keeps ramping up capital spending by 50% each year, and each year the company continues to bring in less revenue than expenses. In other words, DeceptiCloud is operating at a loss, selling its services below cost. Here's how the income statement and the cash flow statement evolve over the first five years of DeceptiCloud's existence:

But what about the operating cash flow? One could make the same argument for DeceptiCloud that is often made for Amazon, that operating cash flow growth is a better measure of the company's success than net income growth. But that's clearly not true here: DeceptiCloud's business is completely unsustainable, despite the $3.3 billion in operating cash flow. It's burning cash thanks to all of those capital lease payments.

For a company that depreciates its assets over 40 years, depreciation will grow slowly even with an enormous amount of money being invested in the business each year. But with both DeceptiCloud and AWS, depreciation will rise very quickly along with spending. All it takes to ramp up operating cash flow, then, is to ramp up capital spending, even if it that spending doesn't produce a real profit.

What it all means
The takeaway is this: a cloud infrastructure business, like the fictional DeceptiCloud or AWS, doesn't need to be profitable in order to generate rapidly increasing operating cash flows each year. The company just needs to keep increasing the amount of capital being thrown into the business. The operating cash flow of such a business is meaningless taken on its own, as is its growth. The fact that Amazon is growing its operating cash flow only means that's its pouring money into AWS. Nothing more.

I suspect that the financials of Amazon's AWS look an awful lot like DeceptiCloud. Unless Amazon's retail business has become unprofitable over the past five years, AWS is posting a net loss. At the same time, the nature of the business, huge capital investments and short depreciation schedules, is driving what looks like robust operating cash flow growth for Amazon. It's not robust, though. It simply seems that way.

Remember, just to maintain the business, capital expenditures roughly equal to the depreciation charge would need to be spent each year. If net income is negative, the business is unprofitable, regardless of whether the operating cash flow is growing.

Valuing Amazon based on this operating cash flow simply doesn't make any sense. The two numbers that matter are the net income and the free cash flow adjusted for capital leases. Both of those are negative.

Amazon is not a cash flow machine, as is commonly believed; it's a money pit. And if you don't believe that, there's this great company called DeceptiCloud that you're going to love.