Since 1997, Kinder Morgan Inc (NYSE:KMI) has spent about $26 billion to acquire energy infrastructure assets. However, the company doesn't buy to build an empire. These deals are designed to fuel growth not just today, but well into the future. That's evident by the two deals the company has announced so far this year.

A few weeks ago, it announced it was acquiring a pipeline company in the Bakken shale for $3 billion, and just this week, it announced a $158 million deal for several oil and biodiesel terminal assets. In both cases, the company bought assets that immediately boosted cash flow while also providing a growing stream of cash in the future from built-in growth. This upside from acquisitions provides investors with confidence that the company can deliver on its expected dividend growth over the next few years.

A look at the latest deal
On the surface, Kinder Morgan's most recent purchase looks like a tiny deal. It's paying $158 million for three terminal sites in the U.S. and an undeveloped piece of land. That's really pocket change for the $130 billion behemoth. However, the company sees the deal as immediately accretive to its earnings, which will further strengthen an already rock-solid divided. The deal also adds to the company's leading North American terminal position, which is detailed on the following slide. 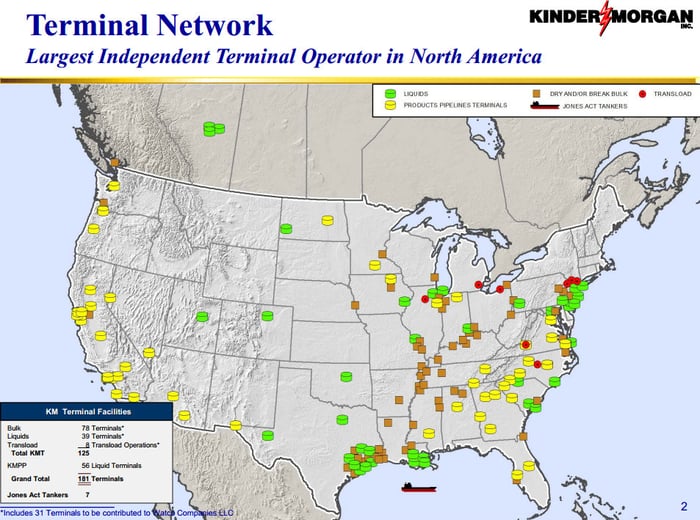 Not only does this acquisition add additional terminal sites to Kinder Morgan's portfolio, but one of the terminals it's acquiring is in Houston, immediately adjacent to the company's Galena Park Terminal complex. That enables the company to expand its presence in the region by just moving its fence, so to speak.

However, the other important aspect of the deal is the embedded growth it's acquiring. This comes in two forms. First, one of the terminals it's acquiring in North Carolina isn't currently operating, so once that facility is up and running, it will add to Kinder Morgan's income stream. On top of that, the company picked up an undeveloped site at Perth Amboy in New Jersey that has waterfront access. This site--which is close to the key New York City market--can be developed in the future to serve the region's growing demand for energy.

Building a bigger backlog
A lot of Kinder Morgan's recent deals have taken this two-step approach of being immediately accretive to earnings while also adding incremental future growth potential. The Bakken midstream deal, for example, came with built-in growth from a pipeline that's currently under construction. Another example is a deal the company made in late 2013, when it bought two Jones Act Tanker companies that controlled a dozen vessels. However, at the time of the deal, just seven were in service; the other five were under construction. That said, the seven that were operational brought in enough cash flow to make the deal immediately accretive, while the new vessels would provide a further boost to the company as they entered service.

By acquiring assets with built-in growth opportunities, Kinder Morgan is able to add to its backlog of visible growth opportunities as well as its so-called shadow backlog of potential projects. This really provides it with a lot of visibility to raise its dividend in the future, as it knows where a bulk of its future growth will come from since it has ample growth outside of any future acquisitions.

Investor takeaway
Kinder Morgan continues to be very strategic when it makes an acquisition. It's looking not just to move the needle a little bit right off the bat, but also seek upside to move the needle in the years ahead. This dual approach to growth should help ensure Kinder Morgan's growth doesn't begin to slow.