SolarCity may not be as infallible as many investors think.

How solar systems like this one are paid for is changing rapidly. Source: SolarCity.

The residential solar industry is changing faster than you may realize. Companies are developing new components that make installation easier, financing is becoming more readily available, and new products like storage and energy management are making their way into the industry.

As these changes occur, one unanswered question is how the industry's leader, SolarCity (SCTY.DL), will be able to adapt. Will its vertically integrated strategy succeed? Is a national infrastructure really the best way to compete in solar? Will technology disrupt how consumers look at solar? The answers will reveal whether or not SolarCity is a great investment or not over the next decade.

More efficient and simpler solar panels are coming
One major change coming to the solar industry is improved efficiency, particularly in the residential business. I covered this last month, and the basic theory is that higher efficiency panels can pack more power generation onto a space-constrained rooftop, effectively lowering the cost of energy from the system.

The efficiency installers offer will go a long way to determining their competitiveness and profit margins. Thus far, SolarCity has bought commodity solar panels that are 14%-16% efficient from the likes of Trina Solar (NYSE: TSL) and Yingli Green Energy (NYSE: YGE) but it may soon surpass those levels with panels made from the Silevo technology it acquired last year. You can see below that Silevo's cell efficiency is currently 21% with a long-term target of 24%. This implies that current cell technology could make panels about 18% efficient. 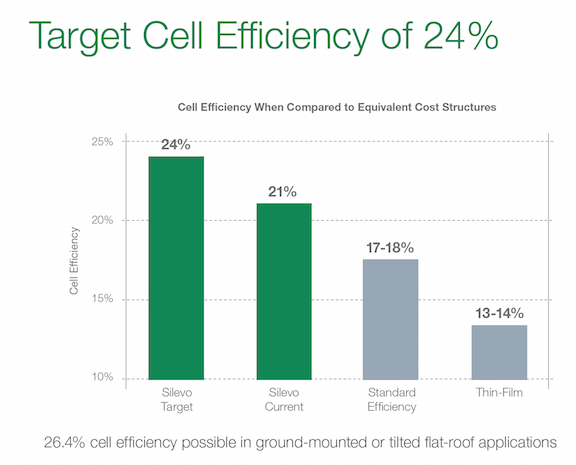 If done cost effectively, this could put SolarCity another step ahead of a competitor like Vivint Solar (VSLR), which has no plans of changing from commodity solar panels. The efficiency level is still behind SunPower (SPWR 4.18%), who makes panels as efficient as 21.5%, but SolarCity has other advantages I'll get into below.

The other change in the solar panels themselves could be more problematic for SolarCity. SunPower and others are beginning to include micro inverters in solar panels, effectively making them plug-and-play for installers. In five years, it's possible you could install a racking system and solar panels on your own roof and only need an electrician to hook the system into the grid. What value does a nationwide installer provide, then?

New financing options
Another challenge over the long term is changes in the way solar systems are financed. One of the major changes SolarCity made in the past year is a transition to loans versus being primarily focused on leases, or third-party ownership. CEO Lyndon Rive said that by the end of this year, loans could be half of the company's business.

Long term, this is absolutely the right move, giving customers more choice and reducing risk that 20-year leases bring into the business. It will also bring revenue and profits into the quarter the systems are sold instead of spreading both over a 20-year period. This makes the business far more transparent for investors.

But selling solar systems also brings competition into the market. Until now, SolarCity was able to beat competitors because it had a low cost structure and better financing terms than many competitors. If they're selling systems, it's far easier to compare system prices from two installers and pick the cheaper option. Unless SolarCity has some differentiator, like higher efficiency from its own solar panels, SolarCity could be entering a commodity business of being a solar installer, competing against small installers willing to take low margins to make a sale.

Is national solar the way to go?
This brings up the overarching question facing the residential solar industry today: Is a national, vertically integrated business model the most efficient option, or should companies specialize in niches?

Many people within the solar industry debate this today, and the answer is unknown. It's certainly true that the vertically integrated model has helped SolarCity grow as quickly as it did and take over the industry in the last few years, but will that be the case in five or 10 years?

Other construction-related industries haven't found a national footprint to be effective. Homebuilders aren't truly national or vertically integrated, and neither are electricians, or home repair contractors, or even utilities. The businesses comparable to installing solar panels and players who may be interested in getting into the solar business aren't national, and it's unknown if this time will be different.

Thus far, SolarCity and even Vivint Solar have been able to leverage large sales fleets and access to financing, but will that change as we move to automated online sales and loans that come from your local bank?

That's an unanswered question, but there are plenty of other companies betting that "owning the trucks" nationwide isn't the right strategy. SunPower, Clean Power Finance, and Sunrun are three of the largest players in financing and providing sales tools to third-party installers who do the dirty work on the ground. In SunPower's case, they're beginning to leverage online tools that will eventually allow customers to build a virtual system and see potential savings from solar energy before talking to anyone.

Long term, it may be more efficient to own the technology, sales, and financing behind installing solar systems than it will be to "own the trucks." Much in the same way Home Depot will help you design a new kitchen, it isn't Home Depot workers who come to install your new cabinets; it's a subcontractor. That may be the way the industry moves in the future.

Does solar energy become a commodity?
As installing solar panels becomes easier and financing becomes more readily available, does a company like SolarCity start facing commodity-like competition, where price is what wins at the end of the day?

I think that's a very real danger, and it's why it's dangerous to build out a national infrastructure the way SolarCity has. But it's also why the company is investing in things like higher-efficiency solar panels and standardized racking systems as ways to cut the cost of energy. This vertical integration could help keep SolarCity a step ahead of competitors large and small.

The real danger is that even these advantages could be limited when you're competing against installers willing to sell for low margins. SolarCity currently generates nearly $2 per watt installed (or roughly $10,000 per home) in retained value and thinks it can keep that figure near $1 per watt long-term. How the industry plays out will tell us if that's true, but I'm skeptical that value will be that high for anyone actually installing solar panels.

Also, remember that building a competitor isn't as hard as it may seem. Vivint Solar was founded in 2011, and it's already the No. 2 residential solar installer in the country. That's alarming considering big names like SunPower and NRG Energy coming after this market. With enough focus, it may not be as hard to disrupt as you think.

SolarCity has certainly shown the ability to act nimbly the adapt to the changing residential solar market, but with a $5.4 billion market cap, are investors looking at this stock with rose-colored glasses? As I've pointed out, there are certainly a lot of unanswered questions, and how the industry, and SolarCity, evolves will tell us whether the company has the kind of growth ahead that investors hope.