Please ensure Javascript is enabled for purposes of website accessibility
Log In Help Join The Motley Fool
Free Article Join Over 1 Million Premium Members And Get More In-Depth Stock Guidance and Research
By Maxx Chatsko - Feb 14, 2015 at 8:24AM

The United States has closed five nuclear reactors since 2013 thanks to the advent of cheaper energy sources. So why is President Obama proposing to give the DOE nearly $1 billion for nuclear technology?

The power of the atom has started to give way to cheaper energy sources with more favorable public opinion. But the don't tell that to President Obama.

His proposed budget for 2016 set aside $907 million for the U.S. Department of Energy to invest in nuclear energy technologies. While it represents just 0.02% of the total $3.99 trillion budget proposal, many may be wondering if the president is throwing good money at an industry that is in decline. Others may be wondering how it may affect their investments, or if the funding has the potential to create new investment opportunities. What's going on here?

Why does nuclear need $907 million?
Erratic wind power and abundant natural gas have pressured the economics of nuclear power plants, which, when coupled with high maintenance and operating costs forced power generators to close five nuclear reactors since the beginning of 2013. That has left the United States with 99 nuclear reactors capable of producing a rather satisfying 99 GW of carbon-free energy; still the most by any single country.

While Southern Company constructs two new (delayed and over budget) reactors in Georgia and the Nuclear Regulatory Commission sifts through a handful of applications for new construction, the future of nuclear energy in America doesn't look very good. Well, at least not for nuclear power as we know it.

Nuclear power plants produce a tremendous amount of carbon-free electricity for up to 24 months straight with reliability that's difficult to match. That's a good thing. However, the size of traditional nuclear reactors has become a handicap for a quickly changing grid that increasingly favors low-maintenance, distributed power generation systems (natural gas, wind, and solar) over labor-intensive, centralized power plants (coal and nuclear).

Luckily, there is one way to transition nuclear power into the 21st century while adapting to the needs of a more modern and efficient electricity grid -- and Obama's $907 million will help keep the technology on the path to commercialization.

The DOE has been interested in helping industry players such as Babcock & Wilcox (BWXT 5.14%) and General Electric Company (GE 4.70%) develop small modular reactors, or SMRs, since 2012 through its SMR Licensing Technical Support Program. The reactors boast several key advantages over their larger predecessors:

In other words, nuclear power as you know it may be dead, but SMRs hold the keys to a bright future for the industry. That future may arrive sooner than you think, as several companies and countries are racing to deploy the first reactors by the mid-2020s.

Where should investors focus? 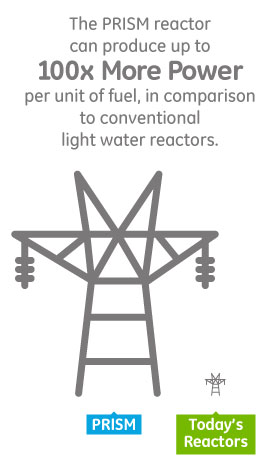 General Electric is developing the Generation IV PRISM reactor, which is the SMR closest to commercial-readiness. At 311 MW, the design missed the DOE funding cutoff of 300 MW, but both entities have been eager to work together nonetheless.

PRISM is a fast neutron reactor, which means it's capable of being fueled with used nuclear fuel and can generate up to 100x more power from plutonium than traditional reactors. General Electric is hoping the capability helps it to deploy the advanced reactor at existing nuclear sites (to dispose of nuclear waste stored onsite) and plutonium storage facilities (to safely dispose of plutonium stockpiles). Investors may see the first PRISM -- or SMR, for that matter -- deployed in the United Kingdom sometime in the 2020s to consume the nation's relatively large plutonium stockpiles and create enough energy to fuel the country for 100 years.

Meanwhile, Babcock & Wilcox is developing the 180-MW mPower Generation IV reactor, which received $150 million from the original DOE program with an additional $226 million available under certain conditions. However, the company shuffled its internal focus on SMRs as part of its restructuring and significantly reduced its spending on the project to just $15 million per year. While a strong group of partners is expected to pick up most of the slack to allow mPower to be licensed and deployed in the mid-2020s, investors may want to limit expectations moving forward. Even the company has admitted that there is "significant work required to bring the technology to reality."

What does it mean for investors?
Large print is one thing, but fine print is another. President Obama may be criticized for funding nuclear energy technologies, but the $907 million requested will be put to good use by the DOE and the companies that receive the funding. After all, it aims to alleviate a major problem facing the energy source generating 19% of all electricity consumer in the United States. So although large, centralized nuclear reactors could be a dying breed, the future of nuclear power is more nimble than most realize thanks to the promise of SMRs. And even if the United States is slow to adopt the advanced nuclear technologies that result from work with the DOE, General Electric and Babcock & Wilcox will reap the rewards on a global scale by exporting their technologies. In the end, that could be the best way to commercialize SMRs and create value for shareholders.