The telecom market attracts investors like a lantern attracts moths on a midsummer night. It's a strong sector with four wildly different top-shelf investment options, all clamoring for investors' attention.

But how can common investors pick the right telecom to fit their own needs and portfolios? To find out, we asked three Motley Fool contributors to weigh in on their favorite American telecoms.

Here you'll find Sprint (NYSE:S) and its potentially huge turnaround story, Verizon Communications' (NYSE:VZ) proven dividend muscles, and AT&T 's (NYSE:T) ambition to expand south of the border. Which strategy is right for you? Read on and decide for yourself:

Joe Tenebruso (AT&T): I've written multiple times in regards to my fondness for Verizon, explaining why I believe the company is best-of-breed within its industry, and an attractive long-term investment for income-seeking investors. Yet I've been growing increasingly intrigued by some of AT&T's recent actions.

The telecom giant's pending acquisition of DIRECTV has garnered much attention. Should regulators approve the deal, the combined company could become a formidable competitor in the pay-TV arena.

But it's another, more under-the-radar acquisition that I find even more interesting, and that is AT&T's recently closed $2.5 billion purchase of Mexican wireless provider Iusacell. With the merger, AT&T plans to build the "first-ever North American Mobile Service area covering more than 400 million consumers and businesses in Mexico and the United States."

According to Randall Stephenson, AT&T chairman and CEO, "It won't matter which country you're in or which country you're calling -- it will all be one network, one customer experience." And as my colleague Jamal Carnette explains, AT&T has since announced an unlimited calling plan to Mexico at no additional charge as part of its $5 monthly World Connect Value package -- a far better deal than what Verizon, Sprint, and T-Mobile currently offer.

Jamal goes on to state that, "The U.S. has over 30 million self-identified Hispanics of Mexican origin, many with family members in Mexico, so AT&T's acquisition is a big deal and could result in U.S. subscriber growth at the expense of the other three telcos."

I agree. And that's a major reason why I believe investors may be underestimating AT&T's future growth. If I'm correct, then Fools who buy AT&T could be well rewarded.

Anders Bylund (Sprint): I'm kind of a sucker for turnaround stories. From that angle, none of the other telecom majors can match Sprint -- not even the resurgent T-Mobile (NASDAQ:TMUS).

The company absolutely finds itself in a hole these days. The wireless network rests on lots of radio spectrum -- but mostly in the high-frequency range that can't penetrate urban jungles, or beam far across the countryside. The resulting low-quality experience has led to Sprint losing subscribers for so long that management tends to celebrate slowdowns in these losses. And investors are no better off than Sprint's long-suffering subscribers: 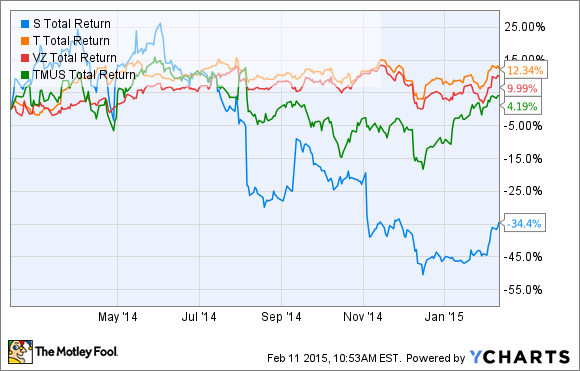 Sprint actually has a lot going for it right now. Majority-owned by Japanese telecom guru Masayoshi Son and his sprawling Softbank empire, Sprint has access to the serious cash reserves it needs in order to patch up its terrible network quality. Son also likes to undermine his competitors with low-cost marketing, and Sprint has already seen an early helping of that strategy. Moreover, Son installed a new CEO with hands-on experience at creating a multinational success story from the bootstraps up.

The turnaround efforts are starting to pay off, too. In the just-reported third quarter, Sprint delivered its first postpaid subscriber additions since 2012. Yes, all the other majors grew faster than Sprint even in this moment of celebration, and the positive result was achieved via a brutal price war.

But you know what they say -- be greedy when others are fearful. Sprint scares a lot of investors today. If Son can execute on his big dreams for Sprint, the stock's rebound could be epic.

Bob Ciura (Verizon): I believe Verizon Communications is the best telecommunications stock to buy because it offers investors the best combination of dividend yield and growth. In the telecom sector, there are stocks that sport very high dividend yields, but paltry dividend growth, like AT&T. AT&T has an attractive 5.5% dividend yield, but has only increased its dividend by 2% per year during the past five years, compounded annually.

Meanwhile, there are stocks that don't offer dividends at all, like Sprint. Sprint doesn't have the financial flexibility to pay a dividend, because it generated $2.4 billion in negative free cash flow in the past three quarters. There's no need to gamble on Sprint's questionable turnaround prospects when a high-quality business is available for all investors.

Verizon rewards shareholders with growth, as well as a solid dividend. Verizon offers a nice 4.5% dividend yield, and rakes in plenty of cash flow to grow the dividend. The company generated $13 billion in free cash flow in 2014, but distributed only $7.8 billion in dividends. This leaves ample room for dividend growth.

Verizon grew its dividend by 4% per year during the past five years, which stands above its peers' dividend growth rates. The company owes its success largely to its highly successful wireless unit. It grew wireless revenue by 8% last year, to $87 billion. This helped Verizon grow adjusted earnings by 18% in 2014.

The bottom line is that I believe Verizon is the "Goldilocks" of the telecom stocks. While AT&T and Sprint are at the extremes in terms of dividend yield and growth, Verizon offers a great combination of earnings growth, current dividend yield, and dividend growth.