Just a couple of days ago, Sprint (NYSE:S) was poised to buy T-Mobile US (NASDAQ:TMUS) and create a third American meganetwork. A rival bid from French wireless provider Iliad had been slapped down by T-Mobile's board of directors, leaving deep-pocketed Sprint backer Masayoshi Son with the opportunity to stitch up a deal package and convince regulators that this was a good idea.

But that was then. Tuesday night, the Sprint board held a momentous meeting. When the board adjourned, Sprint had not only given up on buying T-Mobile, but it also selected a brand-new CEO.

Sprint and Masayoshi Son gave up on convincing regulators that three wireless networks of a similar scale would be better for consumers than the current setup of two giants and two second-tier operators. So that's the end of the proposed $32 billion merger.

And maybe that was the correct conclusion. FCC Chairman Tom Wheeler issued a very brief statement on Sprint's news, which makes it clear that the company always had a very tough row to hoe:

"Four national wireless providers are good for American consumers. Sprint now has an opportunity to focus their efforts on robust competition."

In other words, Wheeler is getting exactly what he was hoping for without going through all the due diligence, formal challenges, and thorough deal vetting that an actual regulatory denial would involve. Consider it millions of taxpayer dollars saved as the FCC instead gets to focus more fully on issues like the upcoming spectrum auction.

The FCC shut down another proposed T-Mobile merger in 2012, arguing that AT&T (NYSE:T) plus T-Mobile would only make the nation's largest carrier even bigger. So when Wheeler casts an evil eye on big telecom deals, it might not matter if you have the Department of Justice in your corner -- the merger could meet an abrupt end in Wheeler's hands anyway.

In the CEO's corner office, Sprint's Dan Hesse finally wore out his welcome.

Under Hesse's wing, Sprint lost about 800,000 customers while quarterly revenues fell by 11%. Sprint shares fell 48% in the Hesse era. Operating cash flows faltered while the need for major infrastructure investments came back with a vengeance in recent years. Net result: Sprint is actually burning Masayoshi Son's cash these days. 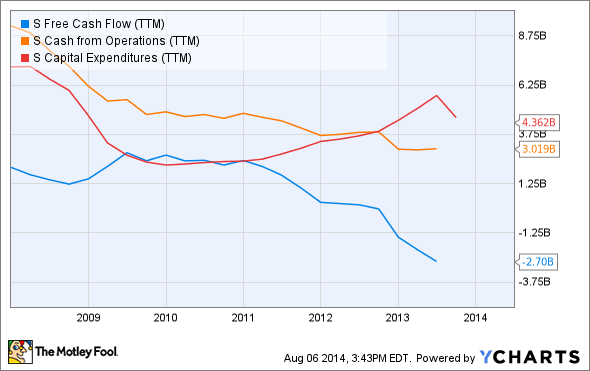 Moreover, Hesse's laid-back management style reportedly didn't mix with Son's in-your-face attitude. That clash of styles behind the scenes mirrored a similar culture clash across Sprint's operations. So it was high time to bring in a new leader that could mesh with Son's leadership style and revamp Sprint from the inside out. This is no time to worry about preserving a seven-year legacy, but to build something totally new.

To that end, Hesse was replaced by Bolivian-American billionaire Marcelo Claure.

Masayoshi Son brought Claure into his talent stables back in January, when his Japanese network, Softbank, acquired a partial interest in wireless supply chain manager Brightstar. Claure has held a boardroom chair for Sprint since that deal closed and will add Hesse's CEO and president titles August 11th.

Marcelo Claure may be soft-spoken, but he can almost match Son when it comes to large-scale ambitions.

Notably, Claure took a small wireless retailer and built it into a network that spanned Latin America, followed by expansion to Europe and Asia. This guy doesn't think small.

These qualities may come in handy as Claure attempts to reverse Sprint's long history of subscriber losses and crumbling profits. Given his intercontinental background, I'm expecting growth by acquisition and a greater willingness to replace time-tested strategies with new ideas from abroad. This is the guy who will implement something like Softbank's radical price cuts and other consumer-friendly system shocks.

As for T-Mobile, the twice-jilted merger target still isn't out of options.

Iliad is reportedly working up a stronger offer to replace the deal that T-Mobile majority owner Deutsche Telecom already rejected. The French company is looking for more investors to help finance the trans-Atlantic merger. Some of these possible partners are all-American satellite and cable TV service providers. At least one of them reacted to Sprint's disengagement with thinly veiled glee:

"A lot has happened the last 24 hours, and we really haven't had a chance to sit and discuss internally," said DISH Network chairman Charlie Ergen in Wednesday morning's earnings call. "The Sprint announcement last night probably increased some optionality," he concluded.

DISH has showed interest in grabbing more wireless spectrum licenses, and being part of a T-Mobile buyout would certainly get that done. Would Ergen prefer a stand-alone T-Mobile combination or an Iliad partnership? Only time will tell.

And even so, T-Mobile is growing faster than any of its "big four" rivals right now, adding a cool million postpaid subscribers in the recently reported second quarter. This network is doing all right, with or without a firm buyout deal.

T-Mobile and Sprint Give Up on Merger Plans, Spin Off in New Directions @themotleyfool #stocks $S $TMUS $T Next Article
Current