Watchmaker Fossil (NASDAQ:FOSL) posted results that fell short of the market's expectations on Tuesday, causing shares to retreat by 13% in after-hours trading. For the fourth quarter of 2014, sales of $1.07 billion were just shy of analysts' target of $1.12 billion, and adjusted earnings per share of $3 missed the forecasted mark of $3.07.

The Richardson, Texas-based company is investing heavily to become a global lifestyle brand, but it still needs core markets like the U.S. to drive growth. And North America proved to be a challenge during the holiday season. Looking ahead, Fossil's management team lowered the bar for 2015 but noted that budding relationships with brand names such as Google, Intel, and Kate Spade could plant the seeds for future growth.

Not quite clockwork
Compared with the fourth quarter of 2013, Fossil posted growth of 12% in earnings per share, roughly half the 24% growth rate posted during the third quarter. Instead of picking up steam heading into the holidays, Fossil was hit by a few headwinds that dampened sales and compressed margins.

The euro averaged in the mid-$1.30 in the first three quarters of 2014 and was roughly $1.25 when we spoke in November. Since then the euro's depreciation has accelerated, particularly since year-end, reaching roughly $1.14 today.

Still, many companies are dealing with a wild currency market, and there were other issues troubling Fossil. Its largest product category, watches, posted a sales decrease of 1% year over year. And Fossil's sales of leather products fell by 2% because of a "highly promotional environment." Only the jewelry category was up on the quarter, showing a 13% year-over-year increase.

Management believes some of these lackluster figures could be due to stores moving from high to low inventory levels, and therefore they are not an indicator of diminished consumer demand. For now, that's a hypothesis resting on management's data from various department stores. And, regardless, Fossil's wholesale business in its largest market -- North America -- was flat for the entire year. That's a broader trend management needs to reverse quickly.

By product category, here's how sales panned out during the entirety of 2014: 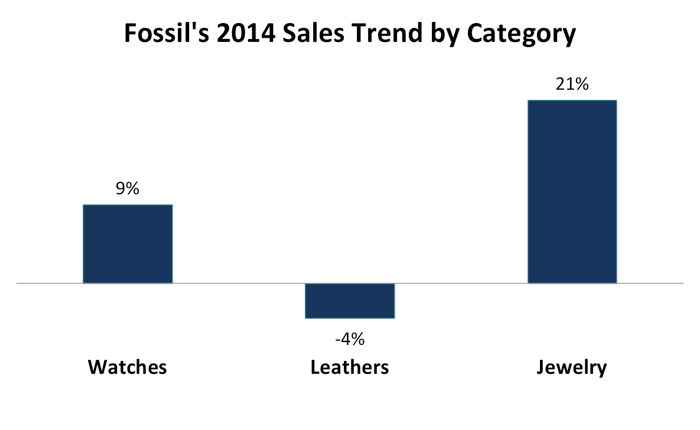 International growth is bolstering those figures, even though China "continues to be challenging" according to management. India, Japan, Australia, and the continent of Europe have strengthened in recent quarters, showing that Fossil's marquee brands are coveted even outside of the U.S. What's more is that management intends to "pivot" spending toward things like marketing now that infrastructure outlays are tapering off. This should produce a bigger bang for the buck in 2015 sales.

With regard to infrastructure, Fossil opened a net of 12 new stores, bringing the company-owned store count to 593 at quarter-end. The company aims to reduce its North American store footprint in 2015 and open a net total of 10 stores, most of which will be international.

What's ahead
Fossil's outlook for the next few quarters is uninspiring, which is another reason the stock sold off heavily. Management cited currency headwinds as the most daunting challenge at this point. From Secor:

That much larger 2014 headwind will now expand further as we move into 2015, given most of our earnings growth will come from our international businesses and our gross margins will be further affected by the rapid strengthening of the U.S. dollar. Based on prevailing exchange rates, we estimate that the net impact on our 2015 results, inclusive of hedging program offsets, will be roughly $1.20 per share.

For investors, it's important to note that predicting or precisely hedging currencies is a next-to-impossible art for a management team, and it's the underlying business drivers that we should focus our attention on. Currency headwinds aside, management stated that the research firm Euromonitor believes the overall watch market should grow at a 6% clip over the next few years. Fossil, in turn, should achieve at least that growth figure based on volumes and potentially reach into double-digit territory.

Let's get digital
In the midst of a challenging retail market, Fossil finds itself pushing the gas pedal on overseas expansion. Meanwhile, the company that took the mobile phone market by storm, Apple, is disrupting the primary industry in which Fossil competes with the soon-to-be released Apple Watch. Like the inner workings of a clock, there are a lot of things in motion right now for this company.

Yet Fossil CEO Kosta Kartsotis seems to be making smart moves with an emphasis on long-term success. On Tuesday, his company announced a 10-year deal with Kate Spade to design, develop, and distribute Kate Spade New York watches through 2025. And Kartsotis is looking to where the industry's headed, stating on the call that he's thinking about how every Fossil product could have technology like sensors or communications capabilities embedded. To accomplish this, he's chosen to work with Google and Intel, perhaps the best two tech companies one could find for this type of wearable computing futuristic project.

Fossil's latest quarter shows that the company will hit some speed bumps as it goes global, downloads new technology, and invites new partners into its portfolio. But these are the steps it needs to take to become the lifestyle brand it aims to be.