Chipotle Mexican Grill (NYSE:CMG) has been a booming success over the last several years, both among customers and investors. Its stock is up by a mouthwatering 540% in the last five years on the back of extraordinary financial performance from the organic burrito company.

However, investing is about the future, not past performance. Chipotle stock is demandingly priced at current levels, and things could get quite tough for investors if growth disappoints over the coming quarters.

But is now a good time to invest in the company, or is the best already in the past for investors in Chipotle? Well, that could be tough to answer, which is why we've asked three Motley Fool contributors to provide their opinion below.

Bob Ciura: Chipotle is a fantastic business and its growth is hugely impressive. Chipotle started as a single restaurant, but it has expanded to over 1,500 locations. Chipotle essentially invented a new class of restaurants now known as "fast-casual," in which customers can place orders and receive food quickly, but also enjoy high-quality, fresh ingredients. Chipotle also mastered the concept of restaurant customization with its assembly line ordering process.

And yet at this point, I believe Chipotle is over-hyped. While I absolutely believe Chipotle is a great company, I also believe even great companies can amount to poor investments if an investor pays too high a price. Yes, Chipotle is growing. In fact, revenue grew 27% last year on 16% growth in comparable-restaurant sales. Earnings per share grew 35% in 2014 thanks to strong sales growth, opening 192 new restaurants during the year, and a 60 basis-point margin expansion. A restaurant that can grow sales, store count, and margins in the same year is something to behold.

But the unfortunate reality is that Chipotle's success is more than accounted for in its share price. At $655 per share, Chipotle trades for 45 times earnings per share. Chipotle is sure to keep growing, as there is plenty of room for additional restaurants, but comparable results are going to be hard to maintain, as rising costs of food will likely eat into margins. Indeed, food costs grew 110 basis points last quarter, and were only partially offset by rising menu prices.

Chipotle can, and probably will, increase prices to keep margins as wide as possible. But there's a limit to how much prices can be raised, and at such a lofty valuation, I don't think the risk-reward proposition is attractive enough.

Rich Duprey: I'm staking out a middle-of-the-road position with Chipotle. There's a reason the Mexican fast-casual food giant has grown to its current size and heft, so it's not just the latest overhyped phenomenon riding the current wave of interest in better-for-you food and looking to cash in (I'm looking at you, Shake Shack (NYSE:SHAK)).

But the dining niche it operates in has matured substantially since it first burst onto the scene, and with a lot of pretenders to the throne clamoring for attention, it's hard to see it having the same afterburners powering it higher. 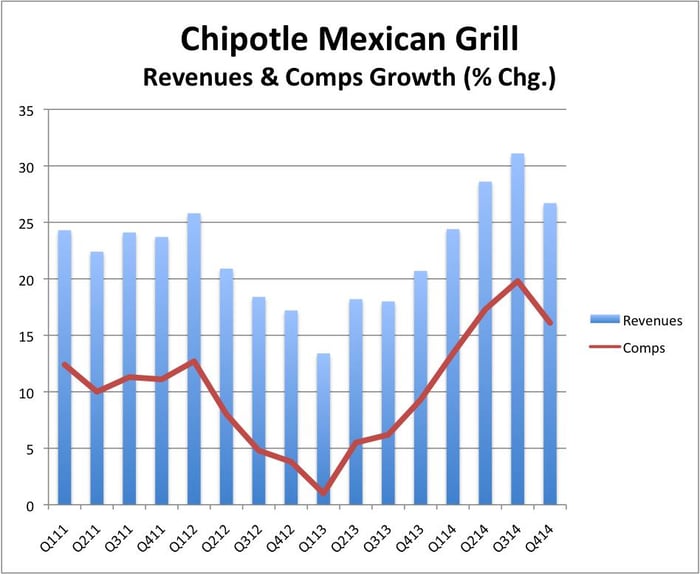 So, I think investors need to manage their expectations for what Chipotle Mexican Grill can offer.

As its fourth-quarter earnings reported showed, Chipotle is still a potent force. Revenues jumped almost 27%, and comparable-store sales were over 16% higher, but the ability to continue growing exponentially higher may have peaked. We're not seeing a company in danger by any stretch, rather it's one that is mature and faces a lot of new competition.

From quick-serve chains like McDonald's (NYSE:MCD) to casual dining outfits like Yum! Brands (NYSE:YUM), we're seeing a convergence of concepts into the fast-casual space. Even fine dining restaurants feel the need to go fast-casual as well, with high-end steak operator Ruth's Chris Group (NASDAQ:RUTH) putting its toe in the water. It's why Shake Shack believes it belongs in the new "fast fine" niche.

Chipotle's CEO Steve Ells realizes there are now a lot of imitators in the market, and that may be one of the reasons it won't be able to command the same kind of pricing power it's historically seen. That doesn't mean its salad days are over, but I wouldn't expect it to be the same powerhouse it was before.

Andrés Cardenal: Chipotle is a truly exceptional player in the restaurant industry, not only because of its extraordinary financial performance, but also because Chipotle is transforming the industry and setting the standard for what consumers can demand from restaurant chains in the years ahead.

Judging by the spicy sales performance the company is reporting, Chipotle is nowhere near any kind of saturation point in the U.S., and international markets are still practically virgin territory for the company. So, everything seems to be indicating that Chipotle still offers enormous room for expansion over the middle and long term.

I'm not particularly concerned about the competition, either. The restaurant industry is savagely competitive, but you need a very special culture to replicate what Chipotle is doing, so I don't think other industry players are in a position to steal big bites from Chipotle's delicious business. On the other hand, valuation is a major risk for investors, and the stock is almost priced for perfection, so any disappointment could create a lot of volatility in Chipotle stock.

Overall, I believe Chipotle is an amazing business to hold for the long term, but I would try to be cautious and patient when building a position, aiming to slowly buy on pullbacks as opposed to going all-in at current prices.