This stat does not bode well for many companies. Source: Accenture

There has been a lot of buzz around the Internet of Things, or IoT, for the past few years. Perhaps it is because Cisco Systems estimates there will be 50 billion new connections by 2020, while IDC believes the IoT market will be $7 trillion in just five years.

But despite this massive potential, a new study from Accenture found that 73% of companies have yet to make any "concrete investments" in the Internet of Things.

"Our survey among 1,400 C-suite decision makers, half of whom are CEOs, found that while they might see and believe in the Internet of Things, this is not necessarily translating into effective moves to exploit it," wrote Bruno Berthon, author of the survey. At one point, he mentioned that companies are almost overconfident in their belief that they are ready to tackle the IoT.

Here are a few more statistics from the study:

And Accenture is not the only group that has found a lack of IoT preparedness among companies.

"The survey found that less than one-quarter of survey respondents has established clear business leadership for the IoT, either in the form of a single organizational unit owning the issue or multiple business units taking ownership of separate IoT efforts."

Which begs the question: Which companies are ready for the Internet of Things?

Not everyone is falling down on the job
General Electric (NYSE:GE) has been a leader in the Industrial Internet -- one segment of the IoT -- by both integrating connectivity technology into its products and also creating its own software to manage those connections.

The company will report full year 2014 earnings on its Industrial Internet revenue later this month, but the company estimated earlier in the year it would earn $1 billion from the segment. While that is not much compared to total revenue of almost $150 billion, GE is well-positioned for the growing opportunity.

Its focus is in using Internet connected equipment to make industries just 1% more efficient -- and payoffs from even the slightest improvement could be huge. Here is a look at GE estimates in efficiency savings per sector: 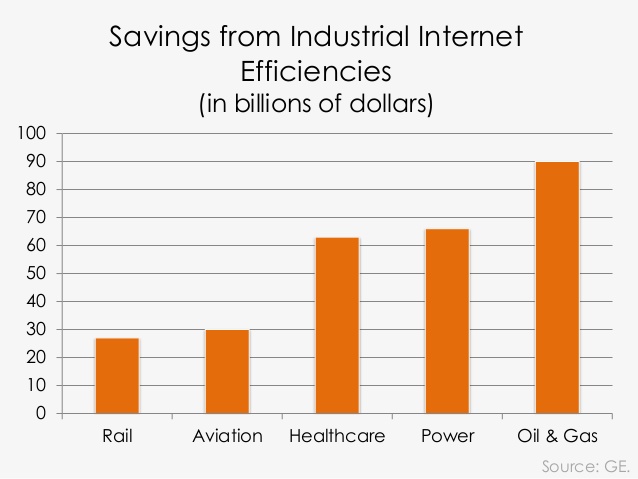 GE is confident it is the company that will help others realize these cost savings, and it is doing an amazing job of transitioning into the software and analytics market to do so.

On a much smaller scale, Skyworks Solutions (NASDAQ:SWKS) is transitioning itself from its current business of mobile connections into IoT ones. Skyworks analog and mixed signal semiconductors provide the Apple iPhone and iPad with a strong connection to wireless carriers, but the company considers the IoT one of its key growth drivers this year.

Time is running out
Companies that do not focus their efforts on the Internet of Things now are poised to miss out on a huge opportunity. Billions of new "things" will come online over the next several years, and they are going to need new connections, software, sensors, and analytics processing to make them useful.

As GE and Skyworks Solutions prove, large and small companies alike have a place in the Internet of Things -- if only businesses will step out and realize the potential.