The residential solar market is dominated by SolarCity (NASDAQ:SCTY.DL) and Vivint Solar (NYSE:VSLR), which have brought solar energy to the masses and revolutionized energy in the process. The strange thing is that they've grown their businesses with sales techniques more like those used by vacuum cleaner salesmen in the 1970s than the high-tech revolutionary product the industry is trying to sell. Door-to-door sales and telemarketing dominate the industry -- hardly revolutionary sales tactics.

These sales methods also make for a fairly uncomfortable experience for those -- like me -- who don't want any sales person calling me or walking up to my door. The result has been very sharp criticism about sales tactics used in the industry, from those as high up as Congress, particularly as the industry grows. But the old-school ways in which solar is being sold could change long term as technology and innovation begin to play a larger role. That could help shake up the residential solar world as we know it.

Why solar sales techniques are so archaic
One of the reasons the solar industry has developed the way it has is because of the education that goes into selling solar energy. In 2010, when SolarCity was developing, it had to beat on doors and tell consumers what solar energy was and how it could save them money just to begin the sales process. SolarCity even acquired Paramount Solar -- an industry-leading direct marketing and sales organization -- in 2013 for $120 million in an effort to bump up telemarketing sales. This is how it's grown its business, and up to now, it's been the winning strategy.

When Vivint Solar launched in 2011, it took door-to-door sales tactics to the next level. The company argues that talking to people directly is key to its success today because neighbors talk, and word spreads about solar, boosting sales neighborhood by neighborhood. The result is a high concentration of Vivint Solar installations in a small region on the East Coast, because word of mouth is the most powerful sales tool it has.

But do we really think phone calls and random knocks on a homeowners' door are the future of solar energy? I certainly have my doubts.

How solar sales are evolving
One of the major changes in today's solar market is the education of the consumer. It's much easier to understand how solar energy could help save you money, how much it should cost, what components you want, and what financing to go with today than it was just a few years ago. As a result, companies have to do less educating, and consumers are also becoming more aware of their competitive options.

The natural evolution will be to move more of the sales process online instead of having an individual consultation. In small ways, SolarCity and Vivint Solar are starting to do this, but it's not their sole focus today.

SunPower (NASDAQ:SPWR) has a slightly different sales strategy, choosing not to own the sales and installation teams, which gives it incentive to use the Internet to generate leads for residential solar. To that end, it's planning to launch an online system this year that will allow customers to see how much a system will cost before talking to anyone. Take a look below at what that might look like from a SunPower presentation late last year.

Undoubtedly, SolarCity and others will follow before long, and given the technology that companies like Vivint Solar, Clean Power Finance, and Sunrun have for their own sales teams, it wouldn't be hard to transfer that technology to an Internet portal.

That would be a big step forward and could lower acquisition costs for residential solar dramatically and the potential savings are tremendous. 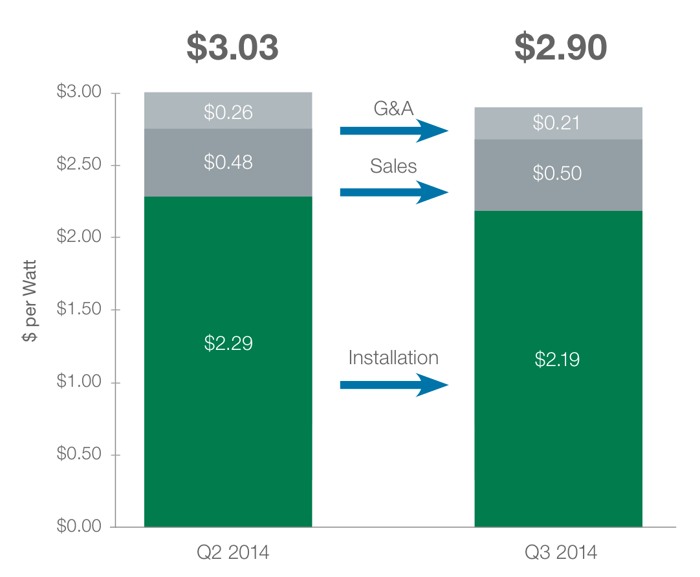 Why automation would be good for solar
A move to more automated sales channels wouldn't just affect consumers' solar experience, it could make solar more profitable for solar installers.

On the right is a chart of SolarCity's cost per watt installed in Q3 2014. You can see that sales costs are $0.50 per watt, or 17% of a system's overall cost. If they could cut sales costs in half to $0.25 it would reduce overall system costs by 8.6%, a huge impact for any installer. The lower costs could be used to lower prices for consumers or even expand margins.

What may be missing in all of these sales strategies is the ability to get a hands-on look at solar before buying.

Where retailers could play an important role
Another sales strategy that may evolve is the showroom, which isn't prevalent in solar today. Like Home Depot in home improvement, a company like Best Buy would be a natural place to showcase a variety of solar panels, racking, and storage options and let customers see what they're getting before signing up to go solar. In fact, Best Buy has dabbled in solar in the past, but probably too early in the industry's evolution to be successful.

The showroom could then line you up with installers to do the work, and even financing. This could offer some of the real-time feedback customers desire with the comfort of personal attention.

The ever-evolving solar industry
The solar industry is changing constantly, and being able to anticipate and adapt to those changes is going to keep investors ahead. Sales strategies are something I think will evolve in the next five years, going from an antiquated door-to-door or telemarketing method to being far more automated online. The question is, which solar company can adapt to these changes the quickest and who will extract the most value for shareholders?

I think one thing that could happen is a leveling playing field between companies who have large sales fleets and small independent installers who can tap into an online sales network from SunPower, Clean Power Finance, Sunrun, or others. That could challenge SolarCity and Vivint Solar's clear lead in the industry.

The flip side is that if they lead the way into new sales techniques it could expand their lead. It'll be key to watch both market share and margins over the next year or two to see how sales strategy changes impact the industry. Solar energy is a growing pie and companies are going to grab as big a piece as possible and the sales strategies they use are be more important than you might think for their future success.