Please ensure Javascript is enabled for purposes of website accessibility
Free Article Join Over 1 Million Premium Members And Get More In-Depth Stock Guidance and Research
By Matthew Frankel, CFP® - Feb 21, 2015 at 7:01AM

With the company losing tons of money and shares at bargain-basement prices, is Genworth a good buy or a lost cause?

Last time Genworth Financial ( GNW -1.76% ) reported earnings, shares plummeted by nearly 50% on worse-than-expected results, as well as the company's statement that its turnaround plan would take longer than expected to execute. 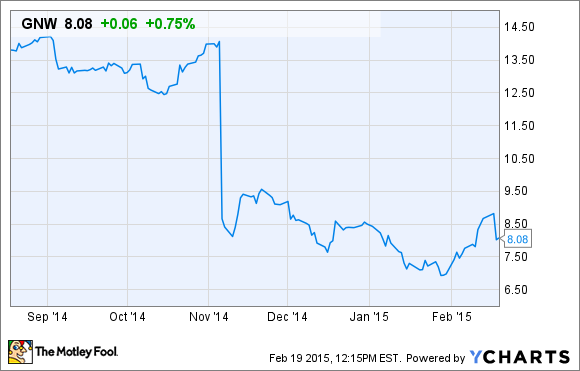 Well, the company just reported its fourth quarter earnings, and while the market seemed to be pleased with the results, it isn't too clear whether this company should be avoided, or whether there is long-term potential for profit. Here's what you need to know.

For the fourth quarter, Genworth reported a net loss of $760 million, or $1.53 per share including an after-tax charge of $478 million related to a review of the company's long-term care business. For the year, the company lost $1.244 million, or $2.51 per share.

Genworth operates two main divisions: U.S. Life Insurance (which was the source of the losses) and Global Mortgage Insurance. However, it is misleading to say that the life insurance division was responsible for the losses, as the part of the business related to actual life insurance policies was profitable for the year.

Rather, the terrible results came from Genworth's long-term care, or LTC, business, which produced a quarterly loss of $506 million. The division actually earned a small ($1 million) profit from life insurance, and another $23 million from its fixed annuities business.

Finally, the mortgage insurance business hasn't been doing too bad, earning $83 million for the quarter, including an overall year-over-year increase in new insurance written, or NIW. The division achieved all of its goals and milestones for 2014, including maintaining strong capitalization ratios and reducing delinquencies.

Looking to the future
Basically, for Genworth to turn things around and be successful in the long run, management will have to figure out how to make money from long-term insurance. And while a turnaround plan is under way, the company has said the progress has been slower than expected.

The company's restructuring plan includes a goal of $100 million in cost savings over the next two years, which it hopes to achieve by consolidating some of its operations among other measures.

Also, the process of obtaining higher premiums for its LTC policies is well under way. As of the end of 2014, 47 states had approved an initial round of premium increases, and six have approved a second round. Once the increases are fully implemented (by 2017), Genworth expects to see an annual increase of between $250 million-$300 million in premium increases.

As an industry leader in the LTC business, there is definitely potential here. By cutting costs and increasing income, there is a lot of money to be made. Long-term care insurance has massive potential in the next several decades, with an aging population and a low rate of insurance among those who may need it. In fact, Genworth has said that there are 78 million Baby Boomers between 50 years old and 68 years old, and while 70% of them will need some level of long-term care in their lifetimes, only 10% currently have any LTC insurance.

A long shot, but could pay off in the end
If Genworth can figure out how to stop hemorrhaging money and turn its leading position in the LTC space into a lucrative business, there is definitely long-term potential here.

And while there is a long way to go, those who are willing to take a chance can buy shares at a pretty substantial discount. As of the end of 2014, Genworth has a book value of $30.04 per share, and even including accumulated losses, this drops to $21.09, nearly three times the current share price.

In a nutshell, Genworth's turnaround is still somewhat of a gamble, but it seems appropriately valued for those who believe in the company's long-term potential. Just know that an investment in Genworth isn't for the faint of heart, nor should it be done with money you can't afford to lose.