Credit card companies are basically the same, right? They make money whenever we swipe our cards or use them to buy something online. To a degree that's true, but there are key differences between how American Express (NYSE:AXP) and its monster rivals Visa (NYSE:V) and MasterCard (NYSE:MA) bring in their revenue. Here's a little primer on the two business models.

Lender, middleman... or both?
The key distinction is that AmEx operates what's called a "closed-loop" network. Basically, this means that the company extends credit, in the form of its famous cards, to its clientele. It also acts as the processor of fees generated by the purchases made with said cards.

This issuer-processor duality is also the business model employed by Discover Financial Services (NYSE:DFS), a much smaller operator responsible for the almost eponymous Discover Card.

Visa and MasterCard, meanwhile, are "open loop" systems. That's a technical way of saying that they're strictly payment processors. Although billions of cards throughout the world conspicuously bear their brand names, neither company issues these instruments (and thus extends credit); instead, this is done by the banks and other financial institutions that use the networks of the two companies.

Both flavors of loop have their pluses and minuses. Since an operator of the closed variety is also the credit issuer, it has reams of insider data on each of its cardholders. This can help it design sharply targeted offerings to them.

Theoretically, that's a boon for the retailers, which benefit from customers being channeled in their direction. Those who choose to honor AmEx cards are subject to higher per-transaction fees than those imposed by Visa and MasterCard.

On the other side of that coin, a pure processor doesn't get wrapped up in the credit side of the business. All of the headaches associated with lending money -- payment delays, defaults, etc. -- are someone else's problem. Instead, Visa and MasterCard get a small percentage of every transaction made through their networks.

Fee for all
Two distinct business models, two different approaches to revenue generation. The open-loopers are after volume, because quite simply, the more transactions, the higher the number of fees generated. So the trick is to widen those networks as much as possible. Every bank that issues their cards grows the customer base that much more.

Closed-loop king AmEx is accepted at significantly fewer merchants than the Visa-MasterCard twins. It compensates for this not only by charging the merchant a higher amount, but also by collecting from the cardholder in the form of relatively high annual fees ($450 for its Platinum Card, for example). It also benefits from higher average spending from a generally more affluent client base.

This is a major reason AmericanExpress has far fewer cards in circulation, yet brings in much more revenue. Going into 2014 with roughly 53 million cards outstanding, AmEx went on to reap $36 billion that year. Visa (285 million cards) and MasterCard (178 million) combined took in a little over $22 billion.

The borders between the two business models have blurred slightly over the years. In 1996, AmEx began licensing its very well-recognized name to third-party issuers. These days, institutions such as Bank of America extend credit via these AmEx-branded cards.

Picking a card
AmEx might have been drawn into the processor-only game because growth is potentially stronger and the margins fatter. Over the past five years, Visa and MasterCard's top lines have grown at much faster clips than AmEx's: 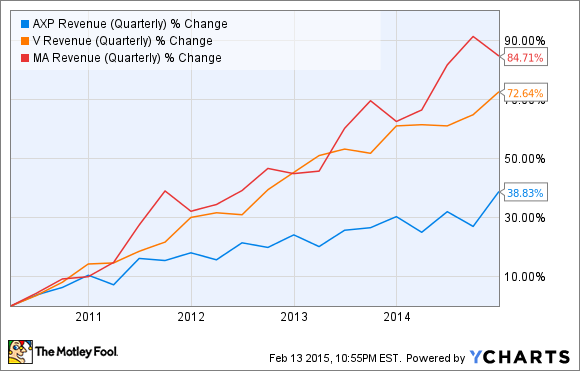 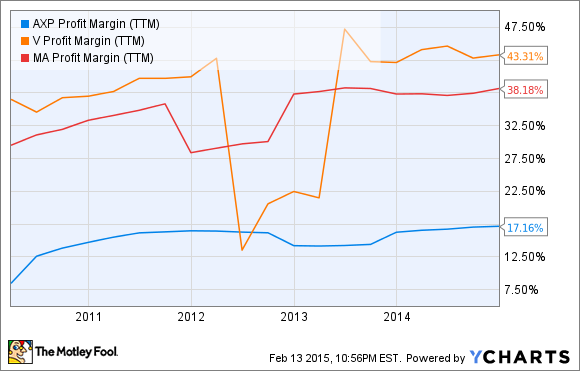 But AmEx might be a better bargain. Just now, its stock trades at a trailing-12-month P/E of under 15, comparing very favorably to the rich valuations of Visa (30) and MasterCard (28).

Dividend yield is more substantial, too: AmEx's is 1.3%, whereas both Visa and MasterCard offer 0.7%. And both of the latter two even recently hiked their payouts.

So, in which business model would you rather put your money? In terms of the above metric, you can pay more for companies operating as processors only, or get a deal on a company that's also a big creditor. There's more than enough room in this busy market for both.