The Internet of Things will have many impacts on our daily lives and some may do so in invisible ways. One impact could be in energy and the next generation of the electric grid.

As more homeowners and businesses become energy producers with solar energy and small-scale wind, they create a problem for electric utilities and an opportunity for new technologies to impact our energy future. Buildings may produce enough energy to power their own home or business, but it's not necessarily at the time they need power. So, homeowners and businesses alike need the electric grid to offtake excess energy and provide on-demand energy when it's needed.

The resulting dynamic is a conflict of interest between those who want to produce their own energy and the utility that wants to be paid for providing services from the grid. But we should also keep in mind that this very conflict is born of the design of the grid in the first place. If the grid were designed differently, distributed energy could work with more central services, and innovative technology that's disrupting the energy landscape could be integrated seamlessly.

Luckily for us, there are lots of people working on this next generation of "Grid 2.0," or microgrids, and you may be shocked to see where it will pop up first.

One of the challenges with the current electric grid is that it's not designed to incorporate a large number of distributed generation systems like this one. Source: SunPower.

What is Grid 2.0?
Let's start with what problem I'm talking about and how innovators are looking to fix it. Grid 2.0, or Utility 2.0 as it's being dubbed in the U.S., is the grid of the future, designed to work with 2015 technology and beyond instead of being based on early 1900s grid design, as today's grid is. Instead of a central power station being the focal point of the grid, as it is today, Grid 2.0 will integrate distributed energy, like rooftop solar, energy storage, demand response that adjusts demand sources like air conditioning and lighting depending on the grid's needs, and fossil fuel, to provide electricity to customers.

It'll be a learning, adapting amalgamation of many sources of supply and demand of energy, all working together. The Internet of Things will be the invisible key to pulling this data together, analyzing it, and deciding where to produce or send energy at any given time.

In the U.S., states are looking at Grid 2.0 as a fresh look at how they regulate existing utilities and how they incorporate new technologies. That's good, but the real revolutions in Grid 2.0 may come far from home.

Why Grid 2.0 won't start here
While utilities, solar companies, demand response system operators, and others argue about how to divide up the energy business in the U.S., the fact remains that virtually all of the country has power. It's just a question of who is going to provide it, and how they're going to be compensated.

In many countries around the world, the grid doesn't operate efficiently for those who want power, and in many places, doesn't even exist. Africa and rural India are two of the most underserved regions, with over a billion people without access to regular electricity. These regions are ripe for innovations coming in Grid 2.0, and they could actually lead the charge.

India has powered its major cities with electricity, however unreliable it is, but there's little possibility of rural areas being connected to the grid. Many countries in sub-Saharan Africa not only don't have electricity, but also don't have a stable government that could help create the infrastructure necessary to build a centralized grid.

The U.S. is thinking about Grid 2.0, too
Designing the future grid may be more complicated in the U.S. than rural villages that can start from scratch, but it's something regulators are starting to think about. Maryland, Connecticut, and New York are beginning to build the early phases of Grid 2.0 from fuel cells in New Haven, Connecticut, to Con Edison asking to build $500 million in customer load management and grid upgrades instead of spending $1 billion on substation upgrades.

Companies are starting to see the opportunity
The opportunity to disrupt the grid isn't lost on leading-edge venture and private equity investors. According to GTM Research, investment in "Grid Edge" companies totaled $1.3 billion last year -- 65% growth from a year before.

Most of the money is going into energy storage, something that's beginning to become available from SolarCity (NASDAQ:SCTY.DL) and SunPower (NASDAQ:SPWR) this year in the U.S. SunPower is also testing energy storage in Australia and last year invested in Tendril, who uses the Internet of Things to collect energy data and learn when to use it most efficiently.

Tesla Motors' (NASDAQ:TSLA) Gigafactory is aimed directly at Grid 2.0 and the necessary energy storage. Initially, batteries will be sold to SolarCity, but that will likely expand if the factory's costs are as low as advertised and energy storage grows as expected.

Demand response companies like EnerNOC (NASDAQ:ENOC) could also play a role in balancing supply and demand of energy by adapting to the grid's needs from the demand side. When demand is high, demand response companies can automatically turn down air conditioning or dim lights in a building, moving energy demand to off-peak times. In some way, demand response will play a big role in energy's use of the Internet of Things and grid designs large and small. 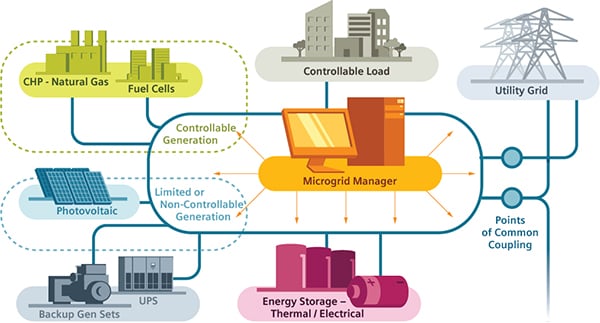 The reason companies large and small are intrigued by microgrids and Grid 2.0 is the immense potential in the industry. This is just a small snapshot of who could be involved, but really, everyone involved in the electricity business has an eye on microgrids or Grid 2.0.

Also, as I mentioned above, there are over a billion people that don't have reliable electricity today, a completely untapped market at the moment. Building microgrids could become a multbillion-dollar business in a heartbeat, and the companies creating the innovations to make the industry possible are a great opportunity for investors.