Big Oil companies such as ExxonMobil (NYSE:XOM), Chevron (NYSE:CVX), and BP (NYSE:BP) are often owned by income investors seeking high, safe, and steadily growing dividends. However, with oil prices suffering their worst crash since the financial crisis investors might be concerned about the safety and growth prospects of these payouts. I think Exxon and Chevron's dividends are safe and likely to keep growing, but BP's long-term payout growth gives me greater cause for concern, here's why.

As this table shows BP offers by far the highest yield and is the only one of these three companies to generate free cash flow in 2014 suffient to cover its buybacks and dividends. Thus income investors might be tempted to choose it over its rivals as its payout seems both sustainable in the short-term and providing the greatest income. However, I would counsel choosing Exxon or Chevron instead for two reasons.

Exxon and Chevron have faster and more consistent dividend growth
First, the American oil giants have a more consistent history of growing dividends, both at a faster rate and during previous oil price crashes such as 1997-1998 and 2008-2009. 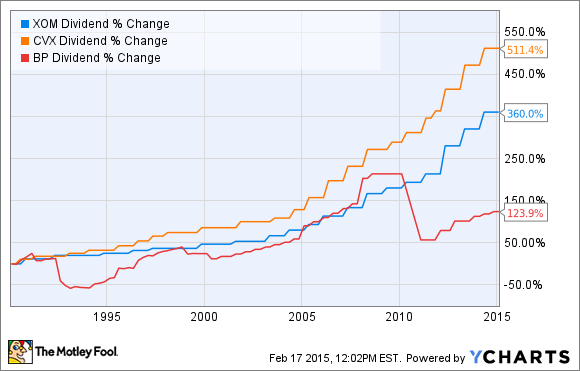 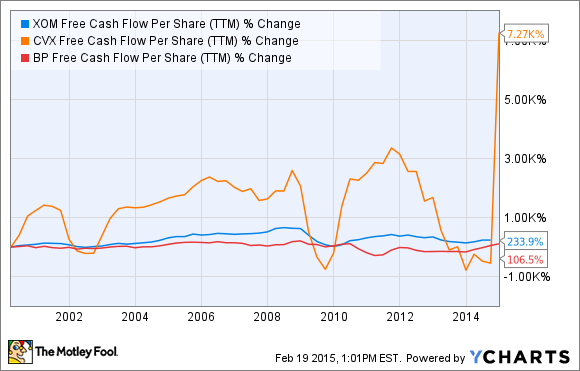 In addition both Exxon and Chevron have better long-term growth in free cash flow per share, as seen in the above chart. Why does that matter? Because while companies can dip into cash reserves or use debt to finance dividend growth in the short-term as both Exxon and Chevron have recently done, in the long-run a sustainable dividend can only grow as fast as free cash flow per share. That's because, while most investors are focused on a company's earnings, in reality its the free cash flow -- cash coming into a company minus expenses and growth investment -- that is the lifeblood of a healthy, safe, and growing long-term dividend.

Compare that to Chevron's 89% in its latest quarter, or to ExxonMobil's industry-leading streak of over 100% reserve replacement ratios between 1993 and 2013, and you can see why I'm far more confident in these companies' ability to continue growing their dividends in the years to come.

As this chart shows, Chevron's sub 100% replacement ratio, while indicating unsustainable production in the short-term, is an aberration when looked at the context of the average replacement ratio between 2009 and 2013. In fact, of the five largest integrated oil companies only BP has failed to replace the oil its produced in that time. This indicates that its future dividend growth prospects might potentially be dimmer than its rivals.

The takeaway: Chevron and Exxon's dividend safety and growth prospects are likely better in the long term
Despite the falling price of oil, BP, Exxon, and Chevron's current dividends are likely safe in the short-term. However, given Exxon's and Chevron's faster, more consistent dividend growth history, and superior reserve replacement ratios I consider those to be the better choices for a diversified, long-term income portfolio due to better future dividend growth prospects.

Oil Stocks: 2 Safe Dividends and 1 That Might Be in Trouble @themotleyfool #stocks $XOM $CVX $BP Next Article
Current