The investing story at Apple (NASDAQ:AAPL) is about to shift dramatically.

So far this year, the investing narrative at the world's largest publicly traded company has centered on the outsized success of the iPhone 6 and 6 Plus. However, as winter gives way to spring, the investing community will increasingly focus on Apple's critical upcoming product: the Apple Watch.

The multibillion-dollar question on everyone's mind is just how profitable the Apple Watch will ultimately prove to Apple and its investors. According to one source, the answer to the Apple Watch's near-term success might lie in the company's past.

Apple Watch = iPad?
The Wall Street Journal reported recently that Apple has placed orders with its Asian fabrication partner to produce between 5 million and 6 million Apple Watches in its initial production run. This roughly equals the same number of orders Apple placed for its first assembly order for the original iPad in 2010, which has understandably prompted speculation about the Apple Watch's potential financial impact. For reference, here's what how the iPad business has developed over the years. 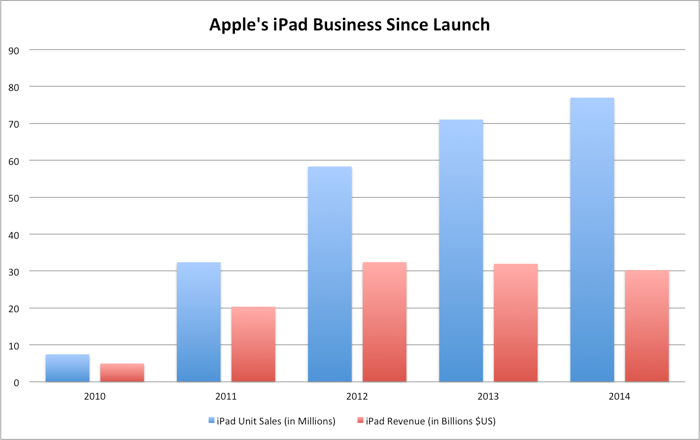 Even as growth has moderated in recent years, the iPad business has been nothing short of a remarkable success. In its first year on the market, the iPad sold roughly 7.5 million units and produced just under $5 billion in revenue. Given the enormity of Apple's revenue base today, an equally impressive performance in year one from the Apple Watch might not garner big praise from the investing community, and understandably so. However, if the Apple Watch mimics the iPad's historical sales trajectory and is still viewed as a failure, it will only be due to the sheer enormity of Apple's iPhone business.

Not so fast
Assuming the Journal report is correct, the similarity between the iPad and Apple Watch first-run order figures is striking. However, I've long argued the Apple Watch will need substantial product innovations in order to grow into a revenue contributor to rival the iPad. Why?

Because the exact use case for the Apple Watch still isn't obvious. Like much of the broader smartwatch industry, the Apple Watch addresses emerging areas of disruption in consumer tech (fitness, messaging, etc.), but doesn't appear to contain sufficiently significant advancement to redefine any of these areas to the same degree that past Apple products have. This makes me deeply skeptical of the device's long-term business opportunity.

The Journal, in a separate report, chronicled how the technologies that made their way into the Apple Watch evolved over the course of the device's production. According to the report, Apple executives initially planned to include a number of impressive innovations into the Apple Watch's first-generation model. However, due to a number of concerns including technological reliability and potential regulatory oversight, Apple's big improvements to areas such as health and fitness monitoring were stripped out of the Watch, leaving what appears to be a less-than-obvious value proposition to consumers.

Over the past several years, Apple has purchased a number of healthcare start-ups and hired senior executives from the sector. Many hope Apple had some kind of game-changing technology up its sleeve it would bring to the mass market with the Apple Watch, something on the order of a blood pressure or blood sugar monitor integrated into the Watch's band. There's also the problem of connectivity as, at least with its first edition, Apple Watch will remain frustratingly reliant on the iPhone in order to utilize all of its features.

Hoping for these kinds of improvements might have been overly optimistic. Apple's iPad business produced just over $30 billion in sales in Apple's fiscal 2014, and I believe the company will need to introduce some major technological advances into the Watch for it to become a line item of the same magnitude.