Who pays these people?

There are 22 "chief market strategists" at Wall Street's biggest banks and investment firms. They work at storied firms such as Goldman Sachs and Morgan Stanley. They have access to the best information, the smartest economists, and teams of brilliant analysts. They talk to the largest investors in the world. They work hard. They are paid lots of money.

One of their most important -- and certainly highest-profile -- jobs is forecasting what the stock market will do over the next year. Strategists do this every January by predicting where the S&P 500 will close on Dec. 31.

You won't be shocked to learn their track record isn't perfect. But you might be surprised at how disastrously bad it is. I certainly was.

On average, chief market strategists' forecasts are worse than those made by a guy I call the Blind Forecaster. He's a brainless idiot who assumes the market goes up 9% -- its long-term historic average -- every year, regardless of circumstances.

Here's the average strategist's forecast versus actual S&P 500 performance since 2000: 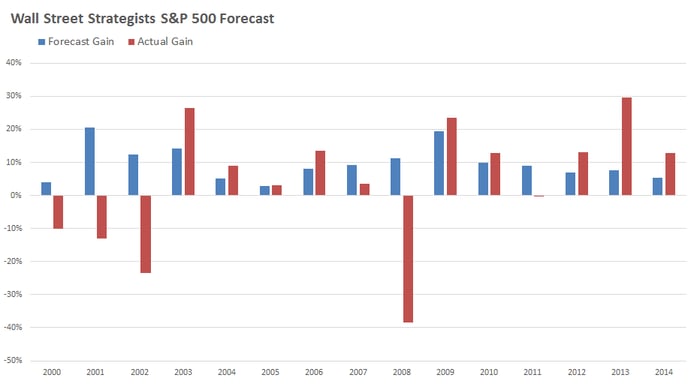 Some quick math shows the strategists' forecasts were off by an average of 14.7 percentage points per year.

How about the Blind Forecaster? Assuming the market would rise 9% every year since 2000 provided a forecast that was off by an average of 14.1 percentage points per year.

The Blind Forecaster wasn't a good forecaster, mind you. He was terrible. He missed bear markets and underestimated bull markets. In only one of the last 14 years was his annual forecast reasonably close to being accurate. But he was still better than the combined effort of 22 of Wall Street's brightest analysts.

And the Blind Forecaster required no million-dollar salary. He worked no late nights. He attended no conference calls, meetings, or luncheons. He made no PowerPoint presentations, and never appeared on CNBC. He has no beach house, and was granted no bonuses. He works free of charge, offering his services to anyone who will listen.

Amazingly, these stories aren't rare. In 2007, economists Ron Alquist and Lutz Kilian looked at crude futures, a market used to predict oil prices. These markets were actually less accurate at predicting oil prices than a naïve "no-change" forecast, which assumes the future price of oil is whatever the current price is now. The no-change forecast was terrible at predicting oil prices, of course. But it was better than the collective effort of the futures market.

This raises two questions: Why do people listen to strategists? And why are they so bad?

The first question is easy. I think there's a burning desire to think of finance as a science like physics or engineering.

We want to think it can be measured cleanly, with precision, in ways that make sense. If you think finance is like physics, you assume there are smart people out there who can read the data, crunch the numbers, and tell us exactly where the S&P 500 will be on Dec. 31, just as a physicist can tell us exactly how bright the moon will be on the last day of the year.

But finance isn't like physics. Or, to borrow an analogy from investor Dean Williams, it's not like classical physics, which analyzes the world in clean, predictable, measurable ways. It's more like quantum physics, which tells us that -- at the particle level -- the world works in messy, disorderly ways, and you can't measure anything precisely because the act of measuring something will affect the thing you're trying to measure (Heisenberg's uncertainty principle). The belief that finance is something precise and measurable is why we listen to strategists. And I don't think that will ever go away.

Finance is much closer to something like sociology. It's barely a science, and driven by irrational, uninformed, emotional, vengeful, gullible, and hormonal human brains.

If you think of finance as being akin to physics when it's actually closer to sociology, forecasting becomes a nightmare.The most important thing to know to accurately forecast future stock prices is what mood investors will be in in the future. Will people be optimistic, and willing to pay a high price for stocks? Or will they be bummed out, panicked about some crisis, pissed off at politicians, and not willing to pay much for stocks? You have to know that. It's the most important variable when predicating future stock returns. And it's unknowable. There is no way to predict what mood I'll be in 12 months from now, because no matter what you measure today, I can ignore it a year from now. That's why strategists have such a bad record.

Worse than a Blind Forecaster.