GoPro (NASDAQ:GPRO) stock has taken investors on a whirlwind ride since its IPO, and it looks like big dips and jumps are going to be the norm in the short-term. Shares still trade roughly 44% higher than the company's opening price in June 2014, but the stock is down roughly 54% from its lifetime high of $98.47, and its gains since last August have been erased. 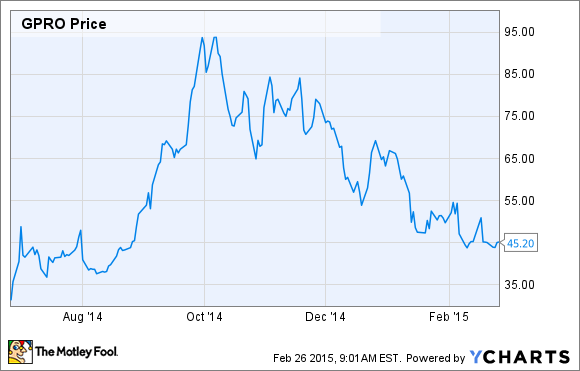 Here's why GoPro stock has been highly volatile, and why investors should anticipate continued volatility going forward.

The reasons for GoPro's latest big swings
GoPro's last big pop also corresponded with the expiration of the lock-up on 76 million shares, or roughly 60% of total shares outstanding. The bump also corresponded with an initiation of coverage from analyst firm Northland Securities. The firm stated that it expects GoPro to outperform the market and gave the stock a target price of $70, which would suggest that shares have roughly 55% upside at current prices.

Northland cited GoPro's strong top and bottom line growth thanks to its Hero4 cameras, brand strength, and potential to benefit from online video distribution as reasons for its favorable outlook on the stock. GoPro has a forward P/E ratio of roughly 62, whereas the forward P/E ratio for the S&P 500 is roughly 17, and the growth-dependent stock has frequently seen big price movement correspond with analyst ratings.

It's possible that the pricing reversal that followed the company's big pricing gain was the partial result of short-sellers buying to cover on positive news and then viewing the bump as a new short opportunity. GoPro is one of the most shorted stocks on the market, and heavy short interest paves the way for big stock swings down the line. When a heavily shorted stock has significant upward momentum, short sellers face pressure to cover to avoid losing their shirts, and the influx of buys then pushes shares even higher.

What the past says about the future
Shortly prior to the pricing swing that correlated with the lockup expiration and Northland Securities rating, GoPro's stock underwent a big dip due to news that Apple (NASDAQ:AAPL) had been granted a patent for an action camera design. Following that, the stock dipped when GoPro issued earnings and margins guidance that the market found disappointing. I think each of these instances can offer some insight as to why GoPro's stock has been so volatile and why that will continue to be the case in the short-term future.

Whether or not GoPro will really develop into more than a hardware company is one of the big points of contention among investors and analysts regarding GoPro. The company has described itself as a media company, however that's not really the case yet, and there's little in the way of solid indication that it will be able to grow into that identity.

As a hardware company, GoPro dominates its niche, but that niche is young and yet to be fully defined. The possibility that a large company, particularly one with hardware and software expertise such as Apple, will jump in the game and change the rules is a looming threat for the camera-maker. So far, potentially threatening competitors like Sony have done a poor job of advertising and marketing their action cameras, but it's reasonable to expect that GoPro will have to fend off stronger competition if the action camera market continues to grow.

In order to do so, GoPro needs to make good on its media network aspirations and innovate with its hardware and software in order to stay ahead of the curve. For now, there are limited indicators to suggest whether GoPro will succeed on those fronts. Investors are left to do a fair amount of guess work, so the stock is likely to see big movements when potentially predictive news emerges.

Turning to earnings performance, the stock price swings that occurred with the company's last quarterly report and issuance of guidance for the current quarterly period provide an indication of the market's expectations for GoPro. The company crushed its earnings targets and analyst expectations, and its stock jumped 14% only to fall 15% on targets for this quarter that were slightly below analyst projections.

Analysts were anticipating that the company would post earnings of $0.17 a share this quarter, but GoPro issued guidance for earnings of between $0.15-$0.17, and it expects quarterly margins to fall from 48% to 44% sequentially. GoPro has a history of issuing conservative guidance, and I think there's a good chance it will continue to post big beats this year, but there's evidence to suggest that small deviations below expectations can impact the stock as much as significant overperformance. With that in mind, there seems to be plenty of gunpowder to trigger the types of explosive swings that have defined GoPro's stock history.