What: Shares in Al Mann's vision-restoring medical device company Second Sight Medical Products (NASDAQ:EYES) roared higher by nearly 40% earlier today. The move is occurring just days after the company reported that its Argus II Retinal Prosthesis System has begun being implanted in patients in France, since which the stock has experienced quite a bit of movement. 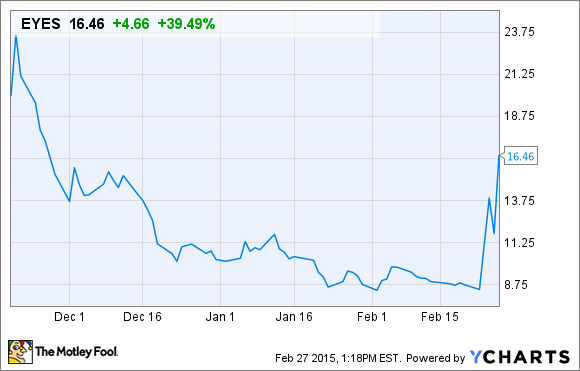 So what: The surge in shares continues a move that has resulted in shares nearly doubling from a low of $8.48 on February 23rd.

That's good news for investors who bought into the company when it IPO'd in November. Second Sight's shares closed near $20 that day, before hitting a high of $24 the following day, and then collapsing.

With shares hovering a bit north of $16 at mid-day today, investors have to be wondering whether or not this rally is likely to continue. Unfortunately, that's a tough question to answer.

Second Sight is an emerging medical device company, and it has a significant backer in serial health care entrepreneur Al Mann, whose previous companies include the medical device maker MiniMed and the inhaled insulin company MannKind Corp.

However, the company remains in the very early stages of commercializing its vision restoring, implantable device. As of its IPO, only 90 people had been treated with the Argus II and as a result, Second Sight's product revenue was just $1.9 million through the first nine months of 2014. Since its IPO, another 10 people have been treated, but once I factor in the company's R&D costs for the next-generation of its devices, as well as operating expenses, I can't help but feel that Second Sight could be a long ways away from reporting shareholder friendly profits.

Now what: There is little question that there is a significant unmet demand for vision restoring products, even if they only provide a slight improvement in patients. For that reason, France has agreed to pay for the implantation of the Argus II in 36 patients with retinitis pigmentosa, a rare condition that affects roughly 24,000 French persons and a total of 167,000 people across Europe. There are another 100,000 people with RP in the United States, so this could be an attractive market, but I am curious why more people haven't received the treatment given that the device won FDA approval in Europe in 2011 and in the U.S. in 2013. Until Second Sight's patient volume hits levels that can justify its $566 million market cap, I'm going to focus on other ideas for now.