As part of a compromise with the federal government, AT&T (NYSE:T). Verizon (NYSE:VZ), Sprint (NYSE:S), and T-Mobile (NASDAQ:TMUS) agreed a year ago to make it much easier for customers to unlock their phones once they had been paid off.

CTIA - The Wireless Association promised the Federal Communications Commission that all four carriers would be in compliance as of Feb. 11, 2015. According to Sina Khanifar, the activist whom President Barack Obama credited with starting the movement that led to him signing the law that requires wireless carriers to unlock phones, that has yet to happen. Khanifar has released a report that shows three of the four companies have yet to fully meet their commitments. 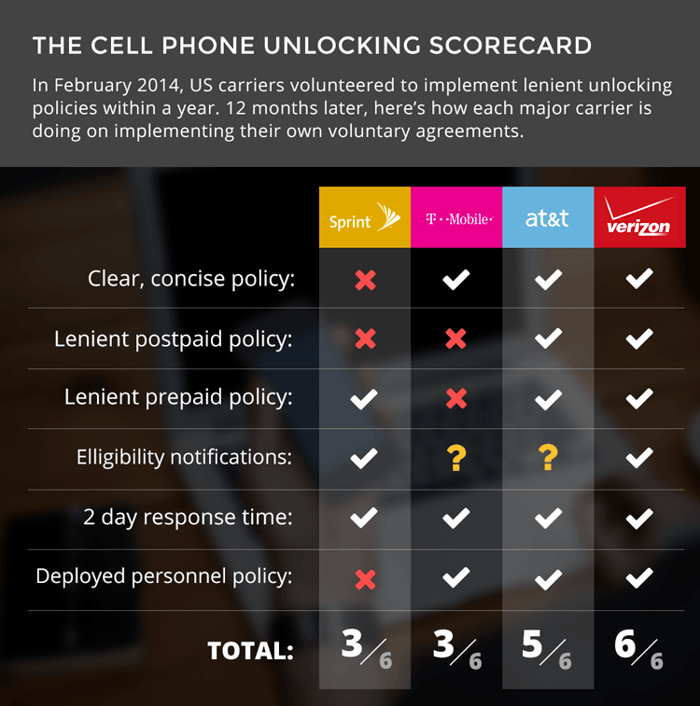 Khanifar's research has been reported by numerous credible sources, but AT&T, Sprint, and T-Mobile all take issue with it. In an Ars Technica article on Khanifar's work, AT&T and T-Mobile specifically addressed his claims.

"We are in compliance and worked with the FCC on the voluntary agreement and making sure our policy was in compliance," a T-Mobile spokesperson told Ars.

"AT&T is in compliance with the unlocking standards in the Mobile Wireless Device Unlocking Voluntary Commitment announced by the CTIA," a spokesman for the company told the tech news site.

This is a case in which all sides are seemingly correct. Khanifar is right that the companies are violating the spirit of the new law by creating too many loopholes and barriers, but the companies might be correct in asserting they are actually compliant.

What the new rules require
Under the new law, which was voluntary in the way that a Lance Armstrong apology is sincere, the carriers agreed to the following six terms:

Where the carriers are failing
There is a major difference between literal compliance and practical compliance. This seems to be where the three carriers differ with Khanifar's latest report.

Khanifar wrote on RepeaterStore.com how he determined whether carriers met each policy. Sprint, for example, has a disclosure policy, but it "can't be described as 'clear, concise and accessible,'" he wrote. The policy for prepaid devices "is hidden two links away at this URL."

He provided detailed explanations for why he failed to find carriers in compliance for the items listed on the chart above. Once again, he was looking at practical implementation rather than raw letter of the law. Here is why he failed T-Mobile on the "prepaid policy" requirement:

T-Mobile will unlock prepaid devices, but strangely they require that the "The [prepaid] account must not be canceled and in good standing." That means if you buy a prepaid device, use it for a year then cancel your service, you can't get your phone unlocked. They also have a clause saying that "T-Mobile may request proof of purchase or additional information in its discretion." Hardly a clear-cut policy.

T-Mobile was very clear in the Ars Technica article that it believes it is in compliance with the law, but did not addressed this specific point.

Khanifar's report was detailed in showing how each company has complied or failed to comply. While he clearly has an agenda, that agenda is making it easy for consumers to unlock phones they own, which is what the law is supposed to accomplish.

He might be biased, but it's hard to say he's wrong.

What will happen?
Ultimately, the FCC can decide whether to hold the carriers responsible for any noncompliance; the federal agency could also find they are following the new rules. In reality, however, consumers should choose to work with the companies that make it easiest to unlock their phones.

That's still a bit tricky to determine; even Verizon, which checked off all six boxes in Khanifar's compliance checklist, can be challenging to deal with.

"Even though Verizon met all six conditions, it isn't the friendliest carrier in terms of attaching other devices to its network," Khanifar wrote. "Their 'Bring Your Own Device' program makes it clear that your phone needs to be an 'unused Verizon phone' to be eligible."

Clearly, all four carriers have a ways to go in exceeding strict compliance and actually making it easy for customers to have full control over the phones they own.

Which Carriers Get a Failing Grade When It Comes to Unlocking Phones? @themotleyfool #stocks $T $S $TMUS $VZ $AAPL Next Article
Current