The TJX Companies (NYSE:TJX) reported mixed fourth-quarter results this week. The off-price retailer --  which operates under the brands T.J. Maxx, Marshalls, and HomeGoods, among a few others -- beat analysts' profit expectations but issued a flat profit outlook for 2015. Still, CEO Carol Meyrowitz thinks its long-term growth strategy is firmly in place. In TJX's quarterly conference call, she revealed five nuggets of information investors should know.

TJX's foot traffic improved in Q4
TJX had a strong fourth quarter. Earnings per share came in at $0.93, a 15% jump over Q4 last year, beating analysts' expectations of $0.90. Net sales for the fourth quarter were also up 6% over the comparable quarter last year, to $8.3 billion. And TJX wasn't simply opening new stores to boost sales. Its same-store sales increased 4% over the comparable quarter last year. According to Meyrowitz, the jump was due largely to increased foot traffic:

We're extremely pleased to see the comp almost entirely driven by customer traffic. We also like the sequential improvement in comps and traffic we saw at all divisions from the third quarter.

2014 was a good year
While the quarter was strong, the comparable quarterly gains were aided partially by abnormal U.S. weather conditions last year. But full-year results were strong, too, as earnings and same-store sales showed gains driven primarily by increased foot traffic. Said Meyrowitz:

I'm also very pleased with our 2014 results. Adjusted earnings per share increased 12% over last year's 15% increase and above our plan while we continue to invest in our many initiatives for the future.

We were delighted to see customer traffic improve each quarter throughout the year. Consolidated comp sales were up 2% for the year over last year's 3% increase.

As investors, it's important to be aware of how well TJX has performed in a competitive retail environment, compared with other brick-and-mortar retailers. Over the past five years, its sales have grown much faster than competitors such as Wal-Mart (NYSE:WMT), Ross Stores, and Target: 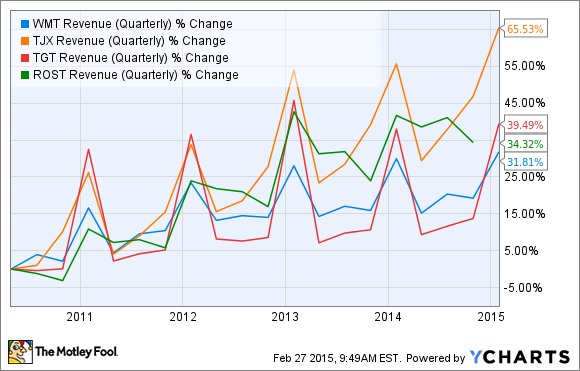 Guidance may disappoint some
One of the few sour notes of the call was that TJX lowered its guidance for 2015. The company expects earnings to come in between $3.17 and $3.25 a share, which, on the low end of that guidance, would be essentially flat year over year. Yet management was quick to point out that 2015's lower EPS target had nothing to do with the health of TJX's underlying business. In Meyrowitz's words:

In 2015, we are planning comps increases consistent with prior years and assuming more conservative EPS growth primarily due to macro factors. Our underlying business remains strong, and we are reiterating our 10% to 13% annual EPS growth model.

Meyrowitz continued by explaining that the lowered guidance factored in negative impacts that were short-term in nature. The company expects a negative currency impact of 5 percentage points and increased wages and other investments to affect EPS by 4 percentage points. The investments, which management calls "pillars to success," will include capital expenditures to remodel 225 existing stores in 2015 and improvements to TJX's e-commerce platform.

E-commerce a priority
TJX's early attempts at e-commerce were unsuccessful, as its ever-changing selection of goods was too much to manage in an online platform. But the company has relaunched an e-commerce site, starting small to avoid its past pitfalls. According to Meyrowitz, it will continue to invest in expanding its online selections in 2015:

In 2014, we added more than 1,700 brands at 11 departments including junior's, men's, jewelry and active wear. In 2015, we will keep adding brands and categories to the site. We just added home to tjmaxx.com and believe this category could be very strong online. We have additional categories planned for 2015 including plus sizes. Eventually, we can see rolling out eCommerce for all our retail brands.

Ultimately, TJX may never reach the e-commerce status of a Wal-Mart, which was also late to e-commerce but now ranks fourth in online sales. Its inventory changes too frequently, and the same items are often not in stores day to day. Yet these investments in the online platform could still go a long way to connecting a new generation of shoppers with TJX's brands.

Wage increases a long-term win
Another area where TJX has followed Wal-Mart's lead is in wages. Like Wal-Mart, TJX has now announced that it will be raising the minimum wage to at least $9 an hour this summer, and in 2016 workers with six months' tenure or more will earn at least $10 an hour. Yet while this move will crimp earnings over the short term, Meyrowitz believes it is a long-term advantage:

This pay initiative is an important part of our strategies to continue attracting and retaining the best talent in order to deliver a great shopping experience for our customers, remain competitive on wages in our U.S. markets, and stay focused on our value mission.

Wage increases are about more than public relations. For brick-and-mortar retailers to remain competitive today, they must offer a unique in-store experience. By offering higher wages, TJX can retain quality employees who are knowledgeable and engaged, which should boost customer service. In this conference call, I was encouraged by management's willingness to sacrifice short-term profits in favor of investments that will benefit shareholders over the long term.