What's happening: Shares of industrial and cryogenic gas handling equipment maker Chart Industries (NASDAQ:GTLS) jumped as much as 11% in early trading today, before settling in at close to a 8.5% gain as of 12 p.m. ET. Since bottoming out in mid-January, the stock is up almost 40%: 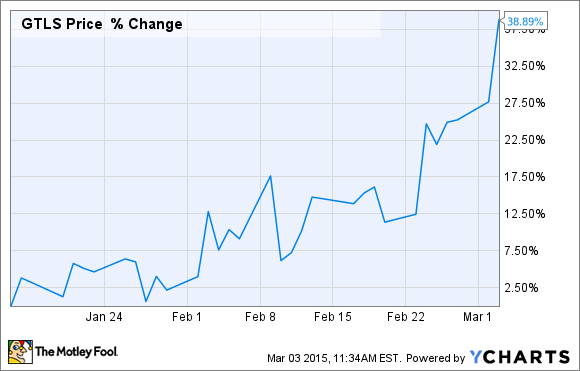 Why it's happening: Piper Jaffray analyst Alexander Potter has upgraded his rating of the company's stock from "neutral" to "overweight," moving his price target to $45 from $36. To some extent, analyst upgrades are a self-fulfilling prophecy in the short term, but don't always prove to be any more accurate than flipping a coin in the long term. In other words, it's not anything that's material to Chart's actual business, so not something that changes the thesis on investing in the company.

Chart released earnings just last week, and the company has stated that it will face some challenges in 2015 due to currency exchange rates and other macroeconomic headwinds. However, the company also continues to invest in growth initiatives that should help it over the long term. Focus on learning about the company's business prospects for long-term returns, and don't count on analyst upgrades.