Retailers have a growing problem: Employees are finding better jobs, quitting at the fastest pace since the global financial crisis in 2008.

Wal-Mart's recently announced plan to increase worker wages is just the start of a bigger trend. As unemployment readings have recently come in below 6% -- 5.7% to be exact -- workers have more bargaining power now than they have had at any time since the Great Recession.

Since bottoming in December 2009, the "quit rate" for retail workers, which measures the rate at which employees leave their jobs, has risen 76% for retail trade compared to 46% for all non-farm industries. 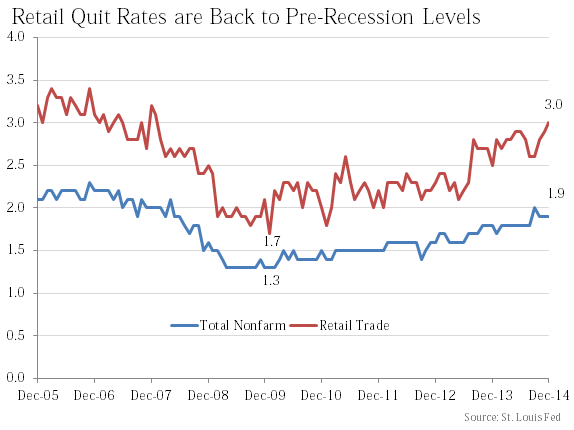 The quit rate measures the percentage of employees who leave a company on their own terms each month, and does not include those who are laid off or otherwise fired.

Thus, with a quit rate of 3% in December 2014, one would expect 36% of retail workers to quit their jobs over the next year. This contrasts greatly to the average quit rate, which would suggest 22.8% of workers will quit their jobs within the next year, should recent trends prove to be a run rate.

And a number of states are forcing their hands -- two-thirds of U.S. states set their minimum wage above the Federal minimum wage of $7.25 per hour.

As competitors for similarly skilled employees, these firms know that it pays not to be on the bottom tier. Lower-paying retailers will inevitably get what they pay for -- game theory dictates that paying the least means picking from the lowest-skilled workers who were passed up by higher-paying rivals. 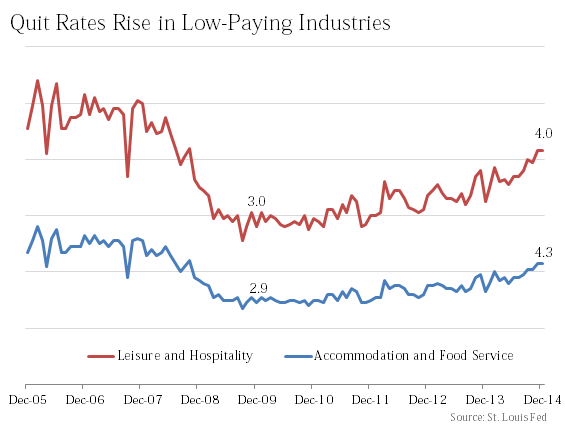 Retail isn't the only industry feeling the pinch. Similarly low-paying industries including accommodations and food service, as well as leisure and hospitality, are also seeing quit rates rise. And the trend may become even more pronounced if higher retail wages lure workers to quit for higher pay at retail chains.

Why it matters
It's been a long time coming, but the economic recovery is finally rewarding wage earners. Since bottoming in 2009, the stock market has gained approximately 242% including reinvested dividends, fueling the wealth of the investor class. However, those who work for their money rather than have their money work for them have seen practically nothing in wage increases since the recession.

Wal-Mart just set the bar for what low-skill retail workers are "worth." It spent the last few years trying to run more efficiently, and less expensively, only to create a bevy of operational issues, not the least of which is the company's inability to keep shelves stocked for customers.

As the largest private American employer with more than 1.3 million employees, the message to other retailers is clear: We're setting the bar for what low-skill employees are worth. Keep up with our wages, or our problems could be yours.

It wouldn't be surprising to see retailers slowly adopt wage increases, not because they want to, but because they'll have to. For the first time in a long time, retail employees have the upper hand at the bargaining table.

Jordan Wathen has no position in any stocks mentioned, but he's hopeful this is start toward higher wages for the millions of retail workers across the country. The Motley Fool recommends Starbucks. The Motley Fool owns shares of Starbucks. Try any of our Foolish newsletter services free for 30 days. We Fools may not all hold the same opinions, but we all believe that considering a diverse range of insights makes us better investors. The Motley Fool has a disclosure policy.