GTM Research and the Solar Energy Industries Association released the U.S. Solar Insight 2014 Year in Review report this morning, and it shows just how far the industry has come in a short amount of time. The U.S. solar industry had another record year in 2014, with 6.2 GW of solar installed, 30% more than a year ago. For at least the next two years the industry should see continued momentum, potentially even cracking the 10 GW mark by 2016.

In 2015 there doesn't appear to be any sign of a slowdown, and new offerings like energy storage will only add value to the solar industry and feed its move into the mainstream energy market. Here's what I took from the latest industry report. 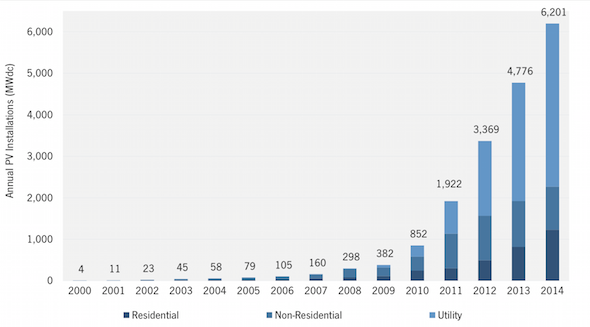 The surprising solar leader
Residential solar from SolarCity (NASDAQ:SCTY.DL) certainly gets a lot of attention in the U.S., but a vast majority of the installations in the country are large utility scale projects. First Solar (NASDAQ:FSLR) and SunPower (NASDAQ:SPWR) have been building 500-plus MW projects in the U.S., and that sheer size is tough for residential solar to compete with. 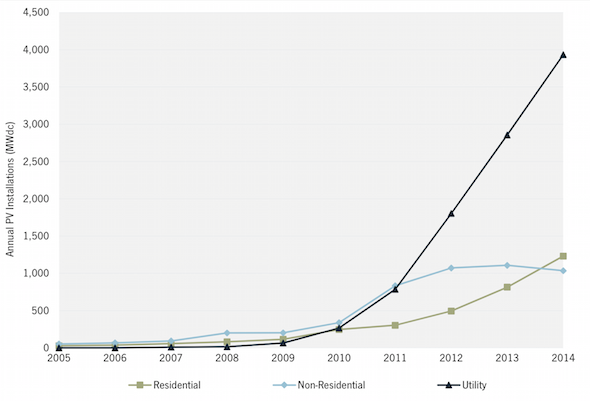 Utility scale solar is much bigger, but residential solar is growing more quickly. Residential installations were up 51%, to 1.23 GW in 2014, and utility scale projects grew at a 38% clip to 3.93 GW.

What'll be interesting to watch over the next few years is if the residential market can keep up that kind of growth as it grows larger. There's much more infrastructure needed to increase installations, and that may be a limiting factor to even greater growth.

Costs continue to plummet
For the long-term health of the industry the key is to keep cutting costs, and there was progress on that front. Residential system costs fell from $3.83 per watt in Q1 to $3.48 in Q4, and SolarCity has reported being far lower than that at $2.86 per watt. 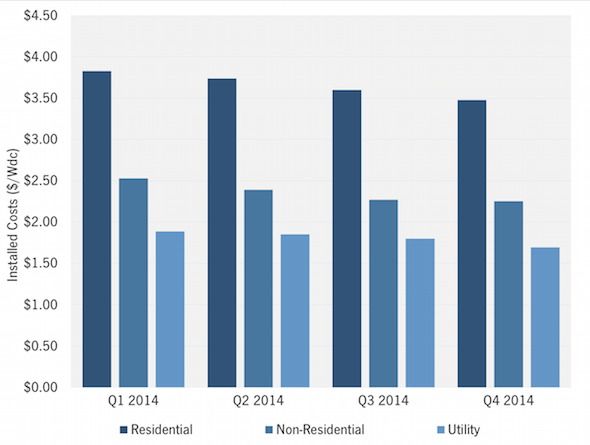 An uncertain future
While everything looks rosy for the solar industry now, and should continue to thru 2016, the future is uncertain. The 30% investment tax credit, which provides a rebate of 30% of the cost of a solar installation, will decline to 10% for commercial projects in 2017 and expire completely for individuals. The industry faces an uphill battle extending the subsidy or replacing it with something else, primarily because of the growth and cost reductions I highlighted above.

GTM Research is predicting a pretty massive impact on the industry, with installations expected to fall 57% in 2017. If that happens, companies like SolarCity and Vivint Solar (NYSE:VSLR) will be in big trouble, because they're reliant on the U.S. solar market. First Solar and SunPower can transition to international markets that are more favorable. 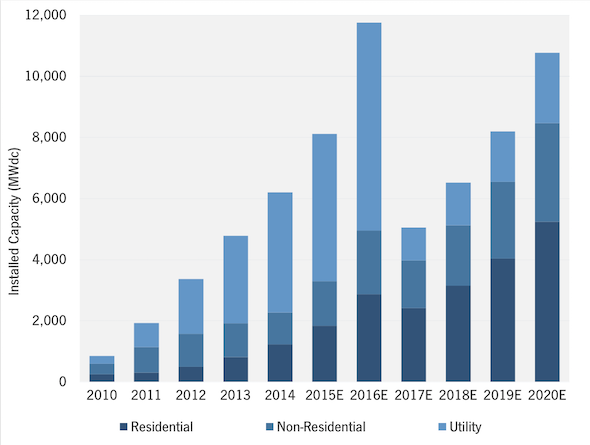 Depending on how the subsidy environment plays out, there are plenty of reasons to be cautiously optimismic about solar energy, at least in the next few years. Long term, say 5-10 years, I don't see any way the solar industry doesn't return to sustainable growth, but there could be speed bumps along the way.

2014 was another banner year for the solar industry, and despite upcoming challenges I'm very bullish on the future of the industry. Fundamentals are improving, and solar energy is competing with fossil fuels on a cost basis. That's where the industry needs to be, and it is still in the early phases of upsetting the $2 trillion electricity generation industry.