Fast-food chain suffers another collapse in sales, bringing into question its turnaround efforts.

Easy come, easy go. The two consecutive months of rising U.S. same store sales McDonald's (MCD 0.39%) enjoyed in December and January were obliterated in February by comps tumbling 4% from the year ago period, much worse than the 0.7% decline analysts expected. 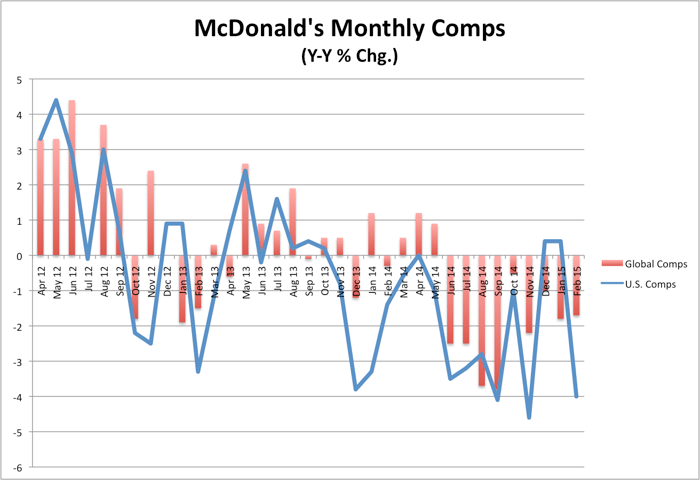 The fast food chain blamed the shortfall on "ongoing aggressive competitive activity," and Wall Street was quick to point to the likes of Chipotle Mexican Grill (CMG 0.20%) as part of the cause, though it's really something much deeper than that. If the fast-casual restaurant leader was the cause of McDonald's problems, we'd see similar declines at Wendy's (WEN -0.40%) and Burger King. But we don't.

Where McDonald's posted a 1% decline in comparable sales for 2014, both Wendy's and BK's parent Restaurant Brands International (QSR 0.15%) reported a 2% increase. Consumers are still willing to scarf down greasy burgers and fries at competing restaurants, just not at McDonald's.

Growth is not on the menu
This means McDonald's plans for overhauling the sustainability of its menu likely won't work either. Along with reporting the dismal comps numbers, McDonald's also said it would:

No doubt part of the allure of Chipotle is the perceived freshness and healthfulness of its ingredients. "Food with Integrity" has been a big part of the fast-casual chain's marketing, yet a recent article in The New York Times showed the average meal at Chipotle had about 1,070 calories and 75% of the daily recommended allowance for saturated fat. This means your burrito bowl is hardly the font of health you thought it was.

Moreover, you really don't hear Wendy's or Burger King going on about such back-to-nature initiatives as part of their messaging to consumers. They're focusing instead on their core menu and value, and it's why McDonald's new CEO Steve Easterbrook will be about as successful as his predecessor Donald Thompson, who fell on his sword after reporting dismal full year results last month.

The skinny on eating fast-food
People aren't going to fast food burger joints to stay fit and trim. They're looking for a simple meal at a cheap price. The market researchers at NPD Group say over a quarter of the visits to quick-serve restaurants are driven solely by value offers. Thus, chains that focus more on core menu items instead of pricier limited-time menu items will do better.

Wendy's certainly got the memo. It recently highlighted how its streamlined and simplified menu gives it an advantage over its rivals, and where it previously directed most of its marketing budget toward limited-time offers, it would now be focusing more on its core menu items. 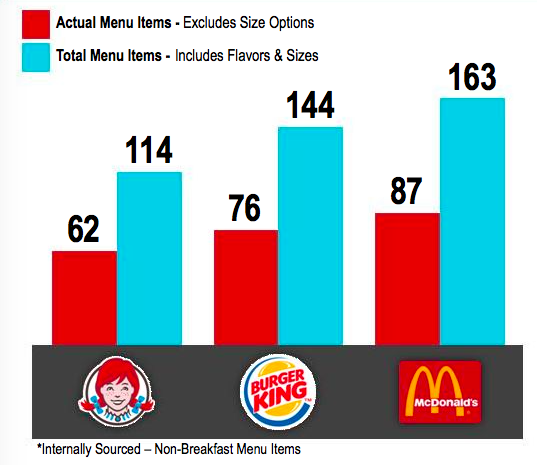 Compare that to where McDonald's is headed: cutting a few slow-moving items from the menu, but not addressing the broader array of options it's giving customers. Local managers are also getting a greater say in what appears on the menu to reflect regional tastes, and when you add in the new "Create Your Taste" platform that lets customers customize their order down to the type of bun (or no bun at all) they order, McDonald's is still providing a dizzying array of choice.

As the old sales adage says, "A confused mind always says no."

Wanting to go upmarket
McDonald's seems to be operating under the assumption that it is competing against Chipotle Mexican Grill and better burger joints like Shake Shack when in reality it's still just a rival to Wendy's and Burger King. The lower- and middle-income customer who frequents McDonald's is not likely to shell out $10 for a SmokeShack Double, while rice and beans are poor substitutes for burgers and fries.

The decision to compete against more upscale eateries amounts to McDonald's aiming at the wrong target.

The crushing sales blow McDonald's suffered in February shouldn't have been unexpected for those watching how it has responded to the threats to its business so far. That it is essentially digging in its heels now by going down the same path it's been on before means investors won't see the fast food restaurant reverse course any time soon.