Please ensure Javascript is enabled for purposes of website accessibility
Log In Help Join The Motley Fool
Free Article Join Over 1 Million Premium Members And Get More In-Depth Stock Guidance and Research
By Rich Duprey – Jan 31, 2015 at 10:48AM

Change for the sake of change doesn't mean improvement is on the way. Taking a wait-and-see approach is the better course of action

That was nice of McDonald's (MCD -1.56%) CEO Donald Thompson to take one for the team. After the burger chain posted one of its worst years financially in decades, the executive tendered his resignation effective March 1. A magnanimous gesture, to be sure, but completely unnecessary. Despite the initial positive reaction from Wall Street on McDonald's shares, smart investors would be wise to still sit out any celebration.

McDonald's problems weren't necessarily Thompson's doing, and his exit by itself doesn't fix them. The burger joint was making a lot of changes to correct its course, and the resignation creates an air of uncertainty about whether those policies will continue. Waiting for the dust to settle is the prudent option.

The horrible, no good, very bad year
In its earnings release last Friday, McDonald's reported a 2% drop in sales in 2014 led by a 1% decline in same-restaurant sales. It marked the fifth consecutive quarter of negative U.S. comps, and the year was the first time in the last 30 years that U.S. sales had not grown from one year to the next. Earnings were also down 15%, and McDonald's issued guidance suggesting the first half of 2015 wasn't going to be pretty either. 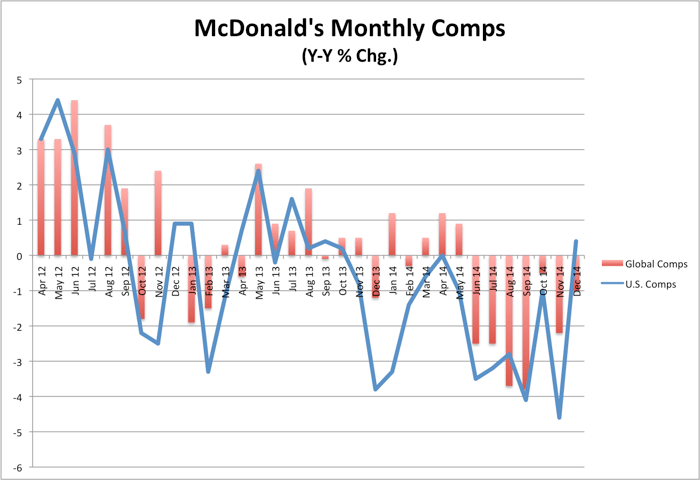 It's been a long, painful trip to the bottom for McDonald's. Data: McDonald's quarterly SEC filings.

Because Thompson was at the helm during this period of poor performance, he does need to shoulder the responsibility; but it doesn't mean he needed to fall on his sword because of it.

Curiously, the implosion in comparable U.S. sales coincided almost perfectly with Thompson's appointment to the position of president and CEO in July 2012. But industry watchers could also blame the rise of the fast-casual dining concept -- a trend that has threatened the entire restaurant industry -- for McDonald's sluggish performance.

And perhaps McDonald's problems didn't come from Chipotle Mexican Grill (CMG -2.63%), as is often suggested, but stemmed from the rise of so-called "better burger" chains and greater innovation on the part of traditional competitors like Wendy's (WEN -0.37%) and Burger King (BKW.DL).

Beyond the circle of influence
Moreover, forces beyond Thompson's control set the restaurant's global operations, which account for almost 70% of total revenues, on a slow, steady decline long before he assumed the helm.

For example, McDonald's Asian operations have suffered from outbreaks of avian flu and food-quality issues during the past several years, which battered sales. A Chinese meat supplier to its biggest Japanese franchisee was found to be using tainted meat last summer, causing the business to post its first loss in 11 years. And before that, the earthquake and tsunami that shook Japan in 2011 set back McDonald's operations.

A new direction
But change is afoot at the burger chain. Under Thompson's direction, McDonald's began simplifying its menus and giving local franchisees more autonomy to take into account local tastes. The restaurant also started offering greater personalization when ordering burgers and sandwiches, and rolled out new mobile payment and ordering options.

Additionally, McDonald's is courageously -- and perhaps foolishly -- engaging customers in a social media "dialogue" about its food. Previous attempts at social media campaigns, however, have gone horribly awry.

But now that McDonald's has committed to changing its course of action, the CEO's upcoming departure begs one important question: Will these initiatives continue beyond his tenure?

Hiring from within
Just as concerning for investors may be who McDonald's has announced will replace Thompson as president and CEO. Not that chief brand officer Steve Easterbrook isn't a capable executive and experienced -- he's been with McDonald's for more than 20 years -- but the company's practice of hiring from within could pose a problem of myopia. McDonald's operations have clearly broken down, and what might be needed more than anything else is a new set of eyes and some fresh thinking.

Before announcing Thompson's departure, McDonald's stock was down 2% during the last 12 months, and essentially unchanged from when he took over. The markets may have been reacting under the impression that the burger chain needed even more change, but the uncertainty surrounding Thompson's departure doesn't bode well for investors either.

Current investors can at least sit back and enjoy a dividend that yields 3.8%, but new investors ought to stay on the sidelines until the dust settles to see whether McDonald's stays the course or creates new upheaval. Just because the CEO is on the way out doesn't mean investors have to rush in to fill the void.