If you thought 2014 was bad, McDonald's (NYSE:MCD) wants you to know you won't be lovin' 2015 either. After recording its fifth straight quarter of falling same-store sales, the burger joint says the coming year isn't looking much better, particularly over the first six months.

The problem for investors is that the changes McDonald's is making to reverse the downward spiral only seem to be half measures that don't address the root problem.

McDonald's said fourth-quarter sales fell 7.3% to $6.6 billion, with U.S. comparable restaurant sales down 1.7% and global comps off 0.9%. That means the burger shop hasn't reported a single quarter of positive comps growth since September of 2013. 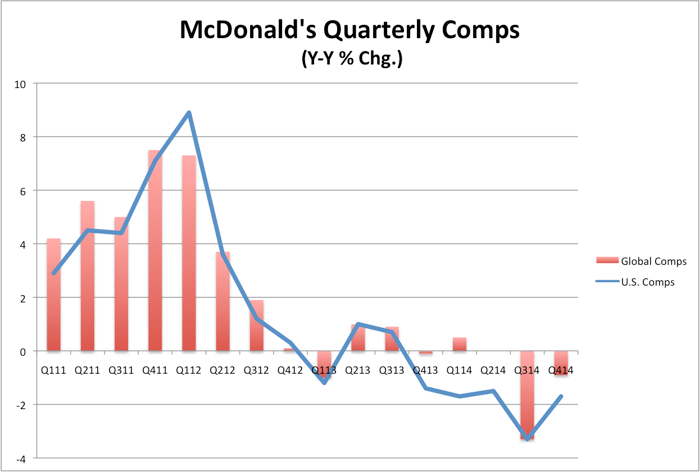 The long goodbye
According to Nation's Restaurant News, 2014 is the first time in 30 years McDonald's has recorded lower year-over-year systemwide sales at its U.S. restaurants. It noted that even in 2002, when it posted its first-ever quarterly loss, it still was able to record systemwide sales growth of 1.3%.

Of course, it's earnings were weighed down by the lingering effects of the food quality scandal in China, where local media recorded one of McDonald's suppliers using meat that was long-since expired. It was an especially sharp blow to McDonald's Japanese franchisee, which recorded its first loss in 11 years following the expose.

McDonald's earnings came in at $1.1 billion, or $1.13 per share, compared with the $1.4 billion, or $1.40 per share, it earned a year earlier. If you exclude that supplier issue, which swiped $0.09 per share from the results, the burger chain's adjusted earnings were $1.22 per share.

Do not pass Go
But it's also worth remembering that the quarter included the popular Monopoly promotion that gave it a brief respite from the persistent drumbeat of negative news. Once the game ended, sales resumed their sickening slide.

McDonald's took a ride on the Reading in October when it relaunched the Monopoly promotion, but the effect didn't last. Source: Mike Mozart via Flickr.

Yet that's being touted as actually beating Wall Street's estimates of $1.20 a stub, and though analysts routinely exclude one-time items from their estimates, you mean to tell me no one was factoring in arguably the biggest debacle ever to hit McDonald's?

Certainly Wall Street's tried in the past to minimize what impact the scandal would have on Yum! Brands (NYSE:YUM) KFC division, which used the same supplier. I warned investors at the time that they were focusing on the wrong numbers. That probably explains why Wall Street reacted with shock -- shock! -- when Yum! finally said things looked were much worse than everyone anticipated.

Naturally, as analysts were changing their view of the fast-food giant, I said now is a good time to buy, and its stock is up 7% since that point in mid-December.

A still-bleak future
But I don't have as much hope for McDonald's turning the corner just yet. It's only taking half measures to regain its footing, and there seems to be a much more dramatic change needed if it wants to halt its slide.

McDonald's is throwing a lot of ideas at the wall now hoping some of them stick:

All of these things are probably needed to some degree. McDonald's menu, for example, has way too many choices, and franchisees have complained it's expensive to keep up with all the new product introductions. But the relative handful of menu eliminations it's making probably won't have any lasting effect.

And slowing restaurant growth is probably a good idea, but maybe reining in the far-flung 36,000-store empire it presides over is a better one. It's a mature business in a mature industry and has grown too large and sclerotic to keep up with rapidly changing consumer preferences. A smaller, more nimble restaurant chain might be the cure for what ails it.

At 17 times trailing earnings and 16 times estimates, while also trading at 3 times its sales, there's nothing to indicate McDonald's will suddenly reverse course. That means things may have to get worse before investors have any chance of seeing its business -- or stock price -- get any better.