The online promotions company has seen its stock price largely discounted since its March 2014 IPO.

Coupons.com (NYSE: COUP) stock exploded out of the gate with its March 2014 IPO, but the magic didn't last long. As with other online discount companies, such as RetailMeNot and Groupon, Coupons.com's stock has seen significant decline in the last year.

The company priced its first share offering at $16, and shares skyrocketed in its first day on the market, closing at about $30 a share. Investors who picked up and dropped the stock after its first market session made out quite well. 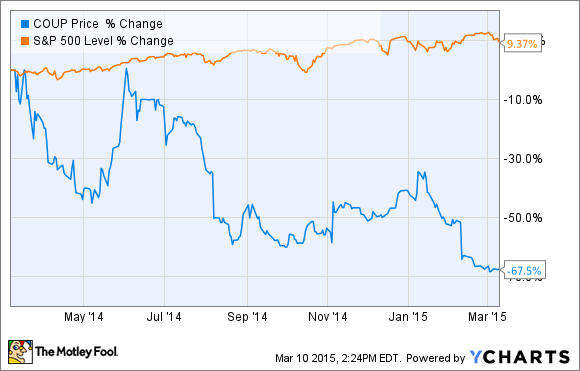 The stock currently trades at a roughly 39% discount from its opening price, and is down more than 67% from the price it hit at the end of its first trading day. Even after the steep decline, the roughly $775 million market cap company trades at roughly 2.8 times forward sales. Shares now trade at a staggering 970 times forward earnings. Where is Coupons.com now, and what does the future look like for the online coupon company? Let's take a look.

Why Coupons.com's price has been slashed
Coupons.com posted substantial earnings underperformance in three of its last four recorded quarters, and the stock has seen numerous downgrades from analyst firms since its IPO last year. The company's most recently quarterly release arrived in February and could safely be characterized as a dud. Shares fell roughly 25% on the earnings release, which also arrived with weak guidance for the current quarterly period, and the stock has yet to recover from the dip. The average analyst estimate called for losses of $0.01 per share, with actual losses coming in at $0.02.

Much more troubling than the earnings miss were company projections for sales between $52 million and $54 million in the current quarter, when analysts were banking on sales of $66 million for the period. The company's growth is starting to slow, which is highly worrying given the online discounter's lofty valuation, absence of profits, and increasing compensation costs. Sales increased 32% in the last fiscal year, while management projects that growth for the current annual term will come in between 24% and 31%, or revenue between $275 million and $290 million.

Coupons.com's plan for the future
Coupons.com remains focused on benefiting from the transition of promotions from print to digital. One key aspect of this initiative is the company's Retailer iQ platform, a targeting and analytics software that the company believes has the potential to shape promotions between manufacturers, retailers, and consumers.

The mobile-focused coupon platform also enables retailers to reach consumers with online receipts and targeted deals based on user behavior and interests, and it's anticipated to account for a significant component of the company's growth in the second half of 2015.

For the last quarter, digital transactions on Retailer iQ increased 86% sequentially, with several partners live, and a total of nine retail partners on board to support the platform. The company is using data collected across its networks to deliver information to consumer packaged goods companies that can then be used to reach members with specifically honed promotions. Coupons.com is hoping that increased user engagement with Retailer iQ will speed the transition from print to digital promotions.

Coupons.com is also rolling out digital ad circulars in conjunction with the Retailer iQ platform, with a focus on improving efficiency in manufacturer to retailer promotions. The company estimates that annual trade promotion spend is approximately $200 billion, with most spend coming in the form of consumer packaged goods companies to retailers, and that its Retailer iQ and circulars will help to deliver wins in this promotions segment.

Print-from-home coupons still account for most of Coupons.com's promotions, and the company has opted not to divulge what percentage of revenue its new paperless platform constitutes. Management has indicated it will reveal the sales effect of Retailer iQ once more partners go live. The company anticipates that 50% of sales will come from paperless promotions within the next four years.

Adoption and average revenue per promotion on the Retailer iQ platform are key metrics to watch going forward.