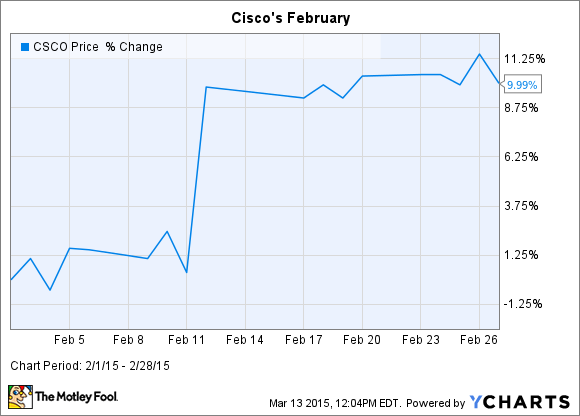 What: Shares of network equipment giant Cisco Systems (NASDAQ:CSCO) jumped just shy of 10% in February, according to S&P Capital IQ data. As the chart above shows, the majority of Cisco's February gain was due to a single event -- a second-quarter earnings report that topped analyst expectations and positive comments from Cisco CEO John Chambers.

So What: On Feb. 11, the company reported revenue of $11.9 billion, up 7% over the prior year's quarter and above the $11.8 billion consensus. In addition, the company reported earnings excluding one-time items of $0.53 per share, topping analyst estimates of $0.51 per share and beating the previous year's EPS total of $0.47 by 12.7%.

In addition, usually dour CEO John Chambers was uncharacteristically upbeat about Cisco's future. Matter of fact, on the conference call Chambers stated, "I've never felt better about our business and future. We're back." In addition, the company declared a quarterly dividend increase of $0.02 per share -- from $0.19 per share to $0.21 -- a 10.5% increase. Shares jumped 9.4% in the after-hours markets and throughout the following day as investors digested the news.

Now what: Interestingly enough, Cisco may be the cheapest way to play the Internet of Things phenomenon, although it chooses to refer to the technology as the Internet of Everything. Cisco envisions Internet-based connections for nearly 50 billion objects by 2020. The added network connections -- whether wireless or wired-in -- should keep Cisco's networking business busy for the next decade. On March 13, CEO John Chambers wrote an op-ed outlining Europe's digital transformation to the Internet of Everything.

More recently, Cisco partnered with competitor Microsoft to deliver cloud computing solutions. For the service, Cisco brings its networking devices and servers with Microsoft Windows Azure pack to target the high-growth cloud space. And while this collaboration may not be a huge part of Cisco's revenue haul, it is symbolic of Cisco's drive to monetize the constant growth of the Internet. Chambers recently commented, "It's like the 1990s all over again." If he's right, investors should be richly rewarded.