Please ensure Javascript is enabled for purposes of website accessibility
Log In Help Join The Motley Fool
Free Article Join Over 1 Million Premium Members And Get More In-Depth Stock Guidance and Research
By Rich Duprey – Mar 14, 2015 at 9:29AM

Good corporate governance has failed when it comes to executive compensation. CEOs of the largest corporations earn more than 330 times the salary of the average worker, according the AFL-CIO's Executive Pay Watch website, a 600% increase from the gap recorded in the early 1980s, giving rise to an image of executives swimming like Scrooge McDuck in a pile of seemingly unearned cash. 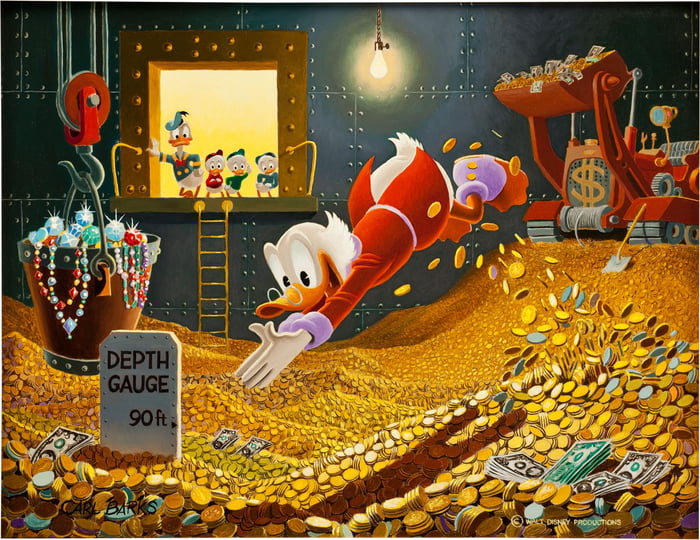 CEOs have been swimming in cash lavished on them by boards of directors. Image: "The Sport of Tycoons" by Carl Barks.

While Forbes found the scale of the problem not nearly as egregious when all executives are included rather than just those in the S&P 500 -- Bureau of Labor Statistics data shows it's a far more reasonable 5-to-1 difference -- it's still clear that in too many instances boards of directors fail to utilize appropriate yardsticks for determining a reasonable and rational level of executive pay.

A deep-rooted problem
Shareholder activist organization As You Sow sought to quantify the disparity by combining statistical analysis with an in-depth look at over 30 "red flag" indicators such as returns on assets and invested capital, stock option and equity grants, pay above peers, sustainability, and third-party rankings from organizations like Institutional Shareholder Services and Glass Lewis.

The result was The 100 Most Overpaid CEOs, a compilation of the worst offenders abusing the trust placed with them and their boards of directors by shareholders.

Don't confuse the review with greed and avarice. The activist organization used data that analyzed the S&P 500 last June based on linear regressions for financial performance and executive pay. As You Sow notes that excessive pay squanders shareholder resources and risks destroying shareholder value. It can also keep companies from paying better wages to their employees. It also found there is virtually no correlation between CEO pay and shareholder returns.

An all-too common occurrence
Several of the companies on the list are not surprising because good governance organizations have frequently castigated them for overpaying their CEOs.

Oracle's (ORCL 0.19%) Larry Ellison, for example, received total compensation of more than $78 million and ranked second on the activist organization's worst offenders list. Chesapeake Energy (CHKA.Q), which has long been criticized for its pay practices (among other things) with respect to former CEO Aubrey McClendon, still came in 15th with $22 million in total compensation paid to McClendon's successor, Robert Lawler.

And while technology and energy are two industries where investors probably expect to find over-the-top compensation, other rather seemingly mundane businesses also scored highly.

A smorgasbord of entitlement
Typically, the restaurant industry doesn't garner a reputation for outsized executive pay, but surprisingly, there was one restaurant that did make the list. Just one.

Chipotle Mexican Grill (CMG 0.42%) earned the distinction as the lone eatery overpaying its executives. Chairman and co-CEO Steven Ells ranked 20th on the As You Sow survey with total compenation in excess of $25.1 million. Together with his co-partner Monty Moran, they were paid a combined $49.5 million in 2013.

It's good to be the king. Chipotle Mexican Grill executives have been gorging on excess pay and benefits for years.

And investors have had enough.

At the fast-casual food chain's annual meeting last year, 77% of Chipotle shareholders revolted against the compensation it lavished on Ells and other executives in a say-on-pay measure that even saw mutual funds and other institutional shareholders come down hard on the restaurant.

As You Sow complains such institutional investors all too often serve as rubber stamps for excessive pay practices because of their conflicts in managing billions of dollars in 401(k) and pension funds.

Rabble-rousing to the rescue
But Chipotle said it heard the investor displeasure loud and clear and last month revealed a new pay package it says will drop noncash, stock-based compensation for all executives to $80 million, down from $98 million a year ago.

By awarding them based on how the restaurant does in relation to others in its industry, it ought to make it harder for the co-CEOs to exceed previous compensation awards. Chipotle says the change will result in a decrease of approximately $34 million in noncash, stock-based compensation expense attributable to officer equity awards compared to 2013.

But don't feel too sorry Ells and Moran. They still got raises, with their base salary rising from $1.4 million last year to $1.54 million this time around.

Pay for performance
Considering that Chipotle Mexican Grill has been such a standout performer, a raise isn't out of line. Over the past decade, total return for the restaurant's stock has exceeded 1,400% in comparison to the S&P 500 that's returned just 98%. Sales last year were up more than 27% on a near 17% rise in comparable sales. 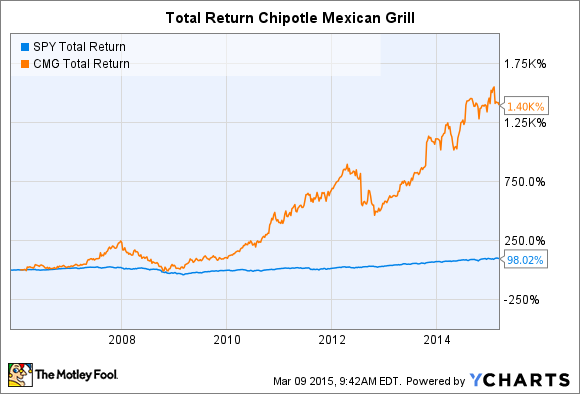 Yet that doesn't justify doling out outsized rewards to executives. As As You Sow notes, "It's also neither accurate nor wise to attribute the performance of an entire corporation, with its tens or hundreds of thousands of employees, to just one or two people."

Chipotle Mexican Grill has come to define a niche market in the restaurant industry, but reasonably rewarding all stakeholders should be the goal of good corporate governance, not just treating CEOs as royalty. The response investors got from the fast-casual leader may encourage others to begin challenging other companies on the list for their pay practices.