It's a high risk, but Seadrill might be a great way to play today's oil market.

There might not be another company in the oil business with as much risk or potential reward as Seadrill (SDRL). The offshore driller could be crushed by $13.0 billion in debt and billions more in obligations for new rigs, or it could return to its 52-week high, nearly quadrupling its stock price today.

Here's why I like this stock for the long term, and why it's not a stock for every investor. 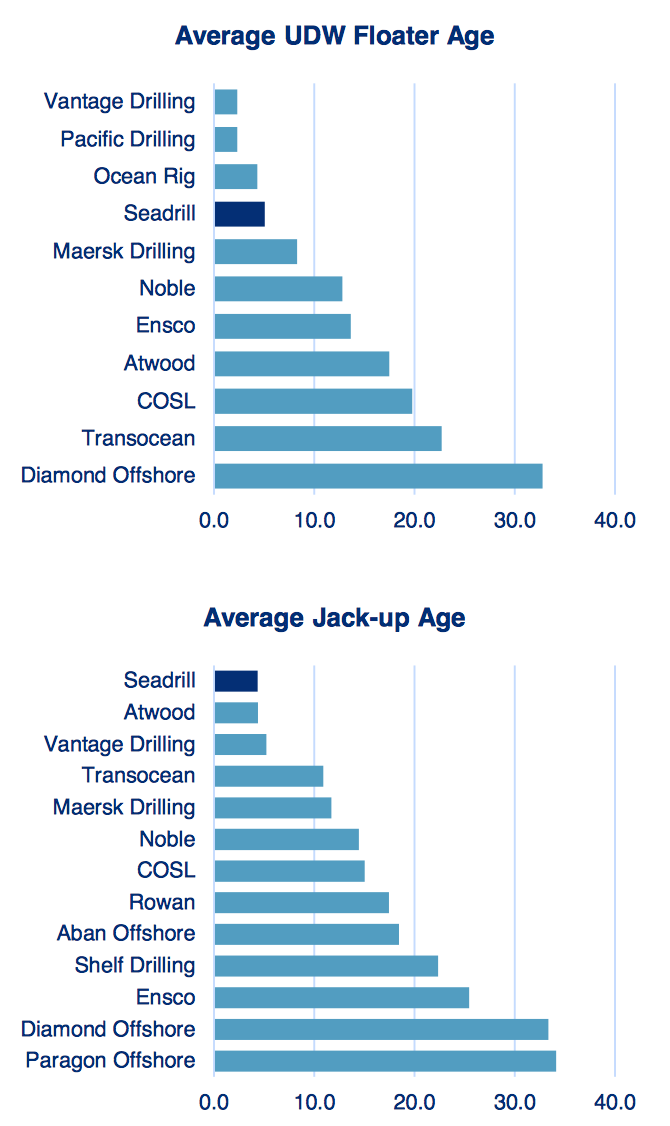 The best fleet in offshore drilling
Demand is down for offshore drilling rigs as the price of oil remains depressed, with dayrates falling across the board, and companies in the best strategic position have the best chance to survive. Remaining demand will shift to newer rigs with better capabilities, especially as they lower dayrates to win contracts. Older rigs could add some modern capabilities but companies often aren't willing to invest tens or hundreds of millions of dollars updating a rig to improve capabilities. The result is newer rigs winning contracts and older rigs heading for cold stacking.

You can see in the chart on the right that Seadrill has one of the newest fleets in the industry, which should keep its rigs active while oil prices are low, even if margins fall because they have to take lower dayrates to win contracts. If or when the price of oil rises, Seadrill will be able to leverage that young fleet to obtain higher dayrates.

Leverage on the price of oil
Seadrill's market cap plunged nearly 75% in the past year to $4.8 billion. In the same time the company generated $3.4 billion in program consolidated EBITDA, a proxy for cash flow from large capital expenditures such as drilling rigs. The market's assumption is that earnings will fall significantly over the next year or two, which justifies a market cap multiple of less than two times EBITDA.

But if oil rises to anywhere near $100 per barrel in the next year the assumption that earnings will plunge could prove incorrect. Seadrill has about $5 billion of backlog for each of the next two years -- if market conditions improve, the stock will be a leveraged way to play the price of oil.

Debt could be a problem
While I've painted a rosy picture for Seadrill stock, there are reasons for concern. Seadrill's $13.0 billion in debt could be trouble, it has $3.5 billion in yard installments for newbuilds in the next two years, and it just agreed to guarantee $2.6 billion in debt for subsidiary North Atlantic Drilling Ltd. (NYSE: NADL).

These obligations could bring the company to its knees if the oil market doesn't improve fairly soon. As I said, with big potential reward comes big potential risk.

Is Seadrill a risk worth taking?
At its core, Seadrill's stock is a bet on the price of oil. If oil rises significantly, it's a great bet on that movement. Unlike oil producers, though, Seadrill won't be in dire straits immediately because the price of oil is down. It has a buffer of a year or two thanks to existing contracts for rigs, providing enough cash flow to pay the bills.

That buffer and the company's industry-leading fleet make me bullish on Seadrill stock. It's a high-risk bet, and the company could be in big trouble if oil doesn't recover in a meaningful way. But over the long term I think oil will rise, and that demand for offshore drilling rigs will increase as well. If I'm right, the upside for investors is tremendous.