Please ensure Javascript is enabled for purposes of website accessibility
Log In Help Join The Motley Fool
Free Article Join Over 1 Million Premium Members And Get More In-Depth Stock Guidance and Research
By George Budwell - Mar 15, 2015 at 8:57AM

Gilead Sciences has been one of the fastest-growing biotech companies over the past few years. The company's rocket-like growth trajectory, though, is expected to start slowing starting this year. Should investors be concerned?

The failure of the market to buy into Gilead Sciences' (GILD 0.82%) amazing growth story is a flat-out mystery in the eyes of many investors. Despite growing product sales by an astounding 127% and non-GAAP earnings per share by 297% last year, the stock has now dropped by double-digits from its 52-week high: 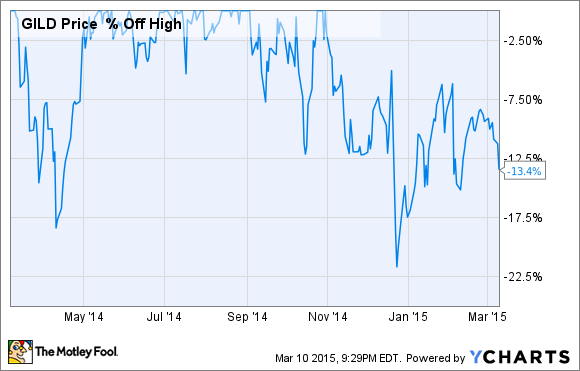 Adding to this perplexing situation, Gilead's shares appear to be some of the cheapest in all of biotech, with a trailing 12-month P/E ratio of 13.4. Most of Gilead's closest biotech peers are garnering significantly higher premiums, as shown by the table below.

One possible explanation for this disconnect between Gilead's strong fundamentals and its somewhat troubling stock performance is that the company is projecting a marked decline in revenue growth this year. Management guided for revenue to rise by 6.1% to 10.2% in 2015 -- a far cry from that monstrous 127% spike in 2014.

As Gilead could still post double-digit sales growth in 2015, let's consider if this is indeed a major reason for the stock's weak performance of late, and whether investors should be concerned.

Growth is tied to hep C drug sales
The bulk of Gilead's revenue growth last year came from its hepatitis C franchise of Sovaldi and Harvoni, with the drug duo posting $12.4 billion in annual sales. However, a fair amount of uncertainty surrounds hep C drugs in general after competing drug developer AbbVie cut a deal with pharmacy benefits manager Express Scripts for its therapy Viekira Pak. This deal reportedly forced Gilead to discount its drugs by 46% to gain exclusivity in the formularies of rival PBMs.

Because of this steep discount and the entry of a competing therapy, the market seems to think Gilead's revenue estimates are perhaps too high. The Street is saying Gilead is a value trap, not a value stock.

Although the validity of the "Gilead as a value trap" hypothesis won't truly be tested until first-quarter numbers are released in late April, early script data from Symphony, at least, suggests this notion is incorrect. Thus far, Viekira Pak is tracking to capture only about 10% of the market this year, down from the prior estimate of 20%, suggesting that fears over this competing drug may have been overblown.

Is Gilead a good buy ahead of first-quarter earnings?
Gilead appears to be stuck in a rut until it releases hard data on Harvoni and Sovaldi's first-quarter revenue. A quick history lesson, though, might provide some insight into why investors should continue buying this stock right now.

Roughly a year ago, Gilead's shares were similarly range-bound, despite strong early script numbers for Sovaldi. Topping it off, management didn't give any guidance for Sovaldi's full-year sales, and even provided a rather conservative annual revenue estimate.

After a few quarters of hard data, the Street finally admitted its mistake, and shares rose by close to 30% for the year: 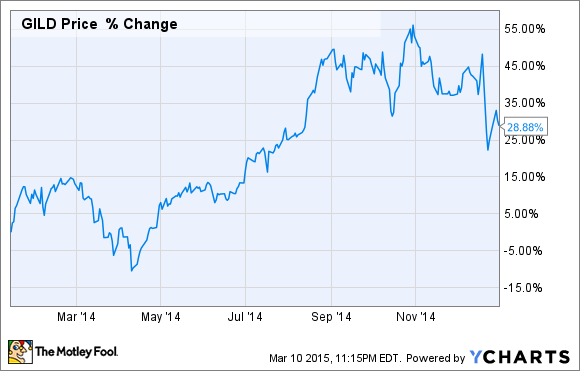 What's key here is that Gilead's management tends to be conservative when it comes to providing annual guidance, and the early script data, again, suggests the Street will have egg on its face for doubting the company's hep C franchise.

In light of Gilead's recent history, don't be surprised if the biotech exceeds the high end of its sales estimates over the course of the year. Unless something unexpected happens in the interim, or the entire market simply tanks, Gilead's shares are therefore probably primed for another 20% to 30% gain in 2015. So any concerns over this top biotech's tapering growth prospects come off as unwarranted, to put it mildly.