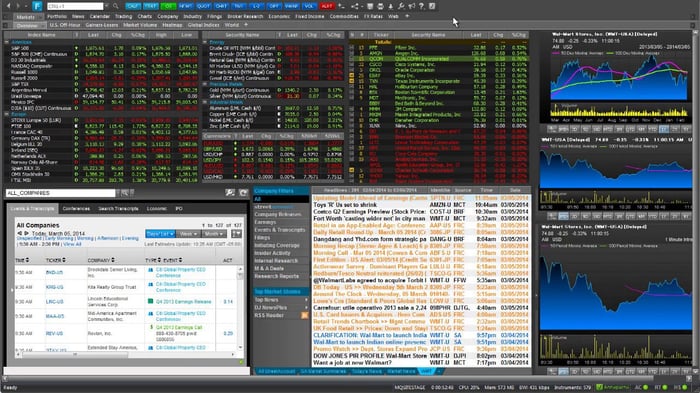 The stock market has been on fire for the past six years, and the financial services companies that provide research and data for Wall Street and other institutional investors typically benefit from favorable market conditions. Yet FactSet Research Systems (NYSE: FDS) shareholders had to wait longer than one might have expected to participate in the market's gains, and only in the past year has the stock climbed precipitously. Coming into Tuesday morning's fiscal second-quarter financial report, FactSet investors were looking for the company to keep growing at a solid pace, taking advantage of competition among financial firms to provide the best ancillary services available. FactSet fell slightly short on the bottom line, but it announced a leadership change it hopes will open a new chapter for the company. Let's take a closer look at FactSet Research Systems to see what investors should take away from the latest announcement.

FactSet is still growing
On its face, FactSet Research Systems' quarterly report stayed fairly close to what most of those following the stock had expected from the financial services provider. Revenue climbed 9.2% to $247.8 million, inching above investors' $246.7 million consensus figure. A nearly 18% jump in net income produced earnings of $1.46 per share; however, excluding one-time items, adjusted earnings per share of $1.39 fell a penny short of what shareholders had hoped to see.

Looking more closely at the results, FactSet enjoyed relatively solid growth in most areas. Annual subscription value from its U.S. operations topped $1 billion for the first time, with about $9 million coming from its recent acquisition of research-management technology provider Code Red while the rest came from organic growth. International revenue, which makes up about a third of FactSet's total sales, grew at a faster pace than domestic sales once the negative impact of currency fluctuations were removed. Client retention continued at its historically strong rate, with 93% of clients sticking with the company, and rising client and employee counts reflected FactSet's overall growth.

CEO Philip Hadley said he was pleased with the record performance on several fronts, citing "our strongest first half in [annual subscription value] growth since 2011." He also highlighted the Code Red acquisition, as it fleshes out the company's overall management-system offerings and gives FactSet exposure to endowments, foundations, sovereign wealth funds, and other institutional investors.

Shifting the C-suite
Yet the big news for FactSet came from the executive ranks, as Hadley said he would give way to a new chief executive officer. Philip Snow will accept a promotion from his role as president, with Hadley emphasizing Snow's "leadership acumen [that] combines a deep knowledge of our clients, a commitment to our employees, and a vision for our company's growth." Hadley will stay on as chairman of FactSet's board of directors, ensuring his own take on the business will still play an important role in the strategic direction in which FactSet evolves in the future.

FactSet's guidance for the current quarter showed the company's continued optimism about that strategic direction. Sales of $251 million to $256 million would be at the high end of investors' forecast, and earnings of $1.40 to $1.42 per share would represent 16% to 17% growth from year-ago figures and would exceed the current consensus projection among investors.

Investors reacted only minimally to the news, with shares easing back a fraction of a percentage point after a 1.5% gain yesterday. For the most part, FactSet appears to remain in a strong position to take advantage of reasonably favorable conditions on Wall Street, and the recent rise in market volatility could actually help the company by encouraging clients to make greater use of its data. Amid competition from other information providers, FactSet is working hard to bulk up its offerings, and whatever new strategic visions incoming CEO Snow brings to the table should help keep the company moving in the right direction.