Please ensure Javascript is enabled for purposes of website accessibility
Log In Help Join The Motley Fool
Free Article Join Over 1 Million Premium Members And Get More In-Depth Stock Guidance and Research
By Andrew Tonner - Mar 17, 2015 at 9:05AM

As Microsoft's Xbox One seeks to narrow the Sony PlayStation 4's sales lead, Sony is about to join Microsoft in one of the world's largest gaming markets.

The device dynamo of yesteryear, Sony has struggled to adapt to the new normal of an increasingly mobile world. The same can be said for Microsoft, whose mobile market share continues to dwindle depressingly in the single-digits.

The two companies also compete head-to-head as the undisputed leaders of the multibillion-dollar console gaming market (sorry, Nintendo). And Sony just challenged Microsoft in gaming's most massive market in the next round of their global battle for console supremacy.

That's right, Sony and Microsoft's gaming consoles are about to duke it out in mainland China.

The console wars come to China
Since the Microsoft Xbox One and Sony PlayStation 4 launched within a week of one another in November 2013, the rival companies have locked horns in gaming markets across the globe, and the next skirmish is set to unfold when Sony brings the PlayStation 4 to China on March 20.

This will mark the first time ever that any Xbox and PlayStation consoles competes in the open market in China. Citing concerns over "violent content and the potential for moral decay," the Chinese government banned all console games in 2000, one year before Microsoft launched the Xbox. Over the years, a robust black market made it relatively easy for Chinese consumers to purchase an Xbox or PlayStation console, but Sony's official entry into the market will mark the first time these two video game rivals compete for Chinese customers via legitimate channels. However, questions still abound about whether either device will deliver a significant commercial impact in this massive gaming market.

Challenges in China
Both consoles face an uphill battle in establishing footholds in the Chinese gaming market for several reasons. The first is cultural. Although the console ban lasted for 14 years, the Chinese gaming market didn't wither in their absence. Instead, it evolved to rely heavily on a homegrown crop of desktop-based and mobile gaming companies that include now-established players like Tencent, Changyou, and NetEase. All told, these Chinese game makers generate billions of dollars in sales each quarter, so it's not a given that Microsoft or Sony can convince consumers to shell out several hundred dollars to move away from their current gaming platform.

The other potential hurdle to success for the PlayStation 4 and Xbox One is government censorship. Recall that the original rationale, or façade in some people's interpretation, behind the console gaming ban was to protect the impressionable Chinese youth. While now allowing consoles into the country, the Chinese government still imposes strict standards over which games can and cannot be sold through legitimate channels. For instance, Microsoft's Xbox One was only able to debut a paltry 10 games alongside its next-generation console. The number has since increased, but this kind of tight government control will clearly loom large as both Sony and Microsoft attempt to break into the Chinese market.

Sony still in the lead
The PlayStation 4 grabbed an early global sales lead over the Xbox One and never looked back. While the chart below only shows worldwide fourth-quarter 2014 sales data, hopefully it's clear Sony's device has been the consistent sales leader. 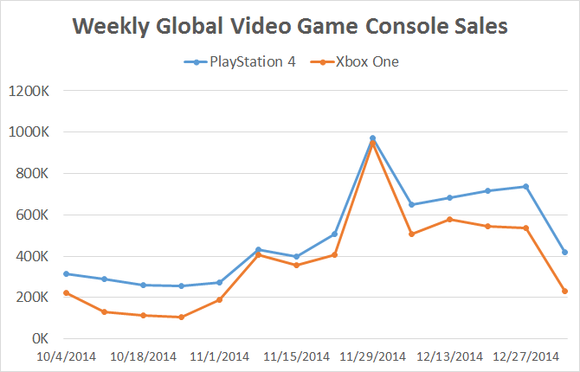 All told, Sony through the end of February had sold 20.2 million PlayStation 4 consoles while Microsoft has sold 11.6 million Xbox One devices, according to VGChartz. However, Sony has enjoyed a significant advantage in the number of markets in which the PS4 has been available.  The PS4 originally launched in only the U.S. and Canada, versus the 13 countries where the Xbox One was initially available. However by early December, Sony quickly increased the total number of markets in which it sold the PS4 to 32, while Microsoft remained supply constrained throughout the Xbox One's rollout. It remains to be seen how the sales battle in China will affect the balance of power.

Breaking into the Chinese gaming market represents a massive commercial opportunity for both companies' gaming consoles. However, given the myriad of issues they both face in in the nation, it's probably best for gaming investors to approach this seemingly impressive PS4 and Xbox One storyline with cautious optimism.

Andrew Tonner has no position in any stocks mentioned. The Motley Fool recommends NetEase.com. Try any of our Foolish newsletter services free for 30 days. We Fools may not all hold the same opinions, but we all believe that considering a diverse range of insights makes us better investors. The Motley Fool has a disclosure policy.