Amazon (NASDAQ:AMZN) stock presents a very particular case. Investors typically either love or hate the company, and it's hard to find a middle ground. While the bulls claim Amazon is on an inevitable path to world domination, the bears point out that sales growth is being achieved at the expense of profits, and there is no way to tell when things could turn for the better regarding Amazon's minuscule margins.

The first question that comes to mind is whether Amazon bulls or bears are right in this dispute. However, maybe the smart thing to do is to look at the company from a different perspective.

Back in 1995, Amazon was just an online bookstore producing only $511,000 in total sales. Fast forward 20 years and the company has become the most disruptive force in the retail business over the last two decades, and the business produced almost $89 billion in total revenues last year, according to S&P Capital IQ. In addition, sales grew 20% in 2014, which is nothing short of breathtaking for a company of Amazon's size.

Amazon's leadership in online retail is unquestionable, and the company keeps consolidating its competitive position thanks to the strength of its Amazon Prime program. Amazon does not disclose exact membership numbers, but management says worldwide membership grew 53% last year "on a base of tens of millions."

In addition, Amazon has become the leading player in cloud computing infrastructure. According to data from the RightScale 2015 State of the Cloud Report, Amazon owns a gargantuan market share of 57% in public cloud usage with its Amazon Web Services division. Based on these estimates, Microsoft (NASDAQ:MSFT) comes far behind in the second position, with a market share of only 12% for its Azure cloud computing platform.

Management announced in its latest earnings conference call that the company has more than one million worldwide active Amazon Web Services customers. Amazon will start reporting financial performance for its cloud computing business starting next quarter, which suggests the business is getting big enough to merit increased financial disclosure.

...or a bottomless money pit?
While Amazon has delivered truly spectacular growth over the long term, its profit margins are actually moving in the wrong direction. Since 2011, Amazon has been investing tons of money in areas such as building its distribution network, its cloud computing business, and digital content. This is hurting profit margins in a big way, and Amazon is either reporting razor-thin profitability, or even losing money at the operating level in some quarters. 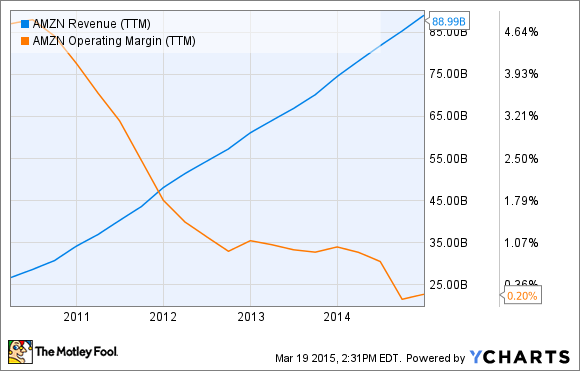 For the first quarter of 2015, management expects to deliver operating results in the range of a $450 million operating loss and a $50 million operating gain. Such a wide range when it comes to guidance could be the company's way of telling shareholders that profits are not a priority for Amazon at this stage.

As long as management believes its long-term opportunities are worth it, the company will continue putting its capital to work in all kinds of projects to consolidate its competitive strengths and plant the seeds of long-term growth, so there is no reason to expect a reversal in the declining margins trend any time soon.

Asking the right question
Maybe the smart thing to do is to think outside the box when it comes to Amazon stock. Trying to categorize a company as either an indestructible growth powerhouse or a bottomless money pit may be too much of a one-dimensional and shortsighted approach.

Different investment opportunities have their own singular risks and potential for returns, and the right question to ask is not whether Amazon is a good or bad stock, but what the company can provide to a portfolio, and who should own Amazon stock.

There is absolutely no visibility as to when Amazon could start making consistent profits, or what kinds of margins the company will produce when -- or if -- that happens. With this in mind, investors oriented toward low-risk companies with a solid track record and a predictable future should clearly stay away from Amazon stock. From a similar perspective, considering that the company is still in investing mode, nobody should expect big capital distributions via dividends or share buybacks from Amazon in the foreseeable future.

On the other hand, if you are willing to tolerate short-term uncertainty in exchange for extraordinary growth opportunities, maybe Amazon deserves a place in your portfolio. After all, the company is the undisputed market leader in online retail and cloud computing, two remarkably exciting businesses with enormous growth prospects. When it comes to innovation, disruption, and growth potential, buying shares of Amazon is a fairly unique opportunity.

How to Tell If Amazon Inc. Belongs in Your Portfolio @themotleyfool #stocks $AMZN $MSFT Next Article
Current