The past year has been absolutely brutal for investors in offshore drillers such as SeaDrill (NYSE:SDRL), but more so for investors in that company's subsidiary, North Atlantic Drilling: (NYSE: NADL). 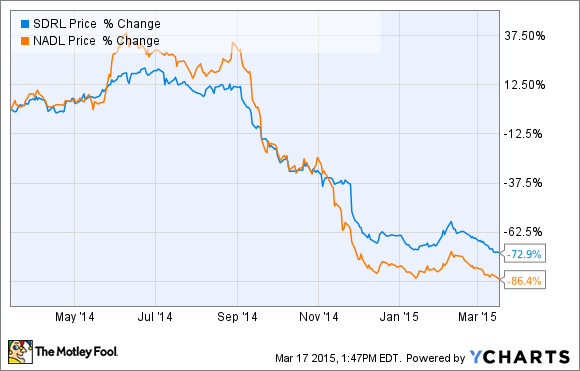 As it turns, out things are about to get worse for both SeaDrill and North Atlantic, as plunging oil prices just resulted in a major cancellation of one of their largest contracts and threatens to kill a major deal at a time when both companies can least afford it.

What happened?
On March 13, North Atlantic disclosed that Russian oil giant Rosneft had cancelled a $1 billion, five-year contract for the West Navigator rig.

During its last earnings report, North Atlantic said it was doubtful that its previously negotiated $4.1 billion agreement with Rosneft could be completed on the existing terms and that plunging oil prices and sanctions against Russia's oil industry threatened to kill the deal entirely.

This cancellation, which represents just one rig out of five that are likely to be affected, has grim implications for both North Atlantic and SeaDrill.

Why it matters to North Atlantic investors
The Rosneft deal, when originally announced, was a huge win for both SeaDrill and North Atlantic. Not only would it have guaranteed five years' worth of cash flow for five of North Atlantic's rigs, but it would also have meant Rosneft would have bought 20% of North Atlantic's shares from SeaDrill, providing that company with $532 million.

Now the cancellation of the West Navigator contract means that the likelihood that the entire deal will be cancelled is, in my opinion, greatly increased.

For one thing, Rosneft chose to terminate the contract rather than renegotiate its terms. This hints that the Russian oil giant concluded that today's oil prices simply don't make its former offshore drilling plans economical.

If that same conclusion is reached regarding the other four planned rig locations, then Rosneft has until May 31 to terminate the rest of the contracts, which would leave just 50% of North Atlantic's eight rigs employed come September.

What's worse, 75% of its remaining contracted rigs are high-spec jack-ups, while the Rosneft contracts covered ultra-deepwater, or UDW, floaters, which command the highest dayrates in the industry. A cancellation of all of Rosneft's contracts would leave North Atlantic scrambling to find work for those UDW rigs when dayrates for that rig type have plunged to under $400,000 per day.

Currently, North Atlantic's UDW fleet's contracted dayrates are averaging $460,000 per day, while its high-spec jack-ups are commanding an average dayrate of $311,000. If North Atlantic isn't able to find work for its potentially soon to be unemployed four UDW rigs, then not only would it lose the majority of its operating cash flows, but it may also be forced to cold-stack them -- a form of storage -- which costs a minimum of $110,000 to $120,000 per day in maintenance costs, according to Rolf Bjorne, a rig broker for Fearnley Offshore.

That, in turn, could make it very difficult to service the company's enormous debt load of $2.6 billion, on which the interest payments last year totaled $102 million, or 43% of North Atlantic's operating cash flows.

This is why North Atlantic's shares are down 90% from their 52-week high, because without the Rosneft contract, North Atlantic would be at grave risk of potential bankruptcy. That is, it would be if it weren't for its parent company, SeaDrill.

Why SeaDrill investors should care
SeaDrill recently insured all of North Atlantic's debt, potentially adding $2.6 billion in additional liabilities to the $13 billion-plus in debt already on its balance sheet, should North Atlantic prove unable to pay its debts. If Rosneft cancels the rest of North Atlantic's UDW rig contracts and North Atlantic isn't able to find other customers to employ those rigs, then I think its ability to service that enormous debt might prove insufficient by year's end.

That would be most unpleasant for SeaDrill shareholders, who would see their company's annual interest expense soar from $490 million in the past 12 months to $592 million if it were forced to take on North Atlantic's interest payments at a time when it was facing its own potential $1.1 billion contract cancellations from Petrobras.

Things keep getting worse for offshore drillers, especially highly leveraged ones
In my opinion, SeaDrill still makes a good long-term investment, but potential and current investors shouldn't fool themselves. This is one of the higher-risk offshore drillers you can own, thanks to its enormous debt load and giant backlog of new rigs yet to be delivered at a cost of $4.3 billion.

Meanwhile, North Atlantic -- which I own a few shares of myself -- represents one of the riskiest investments in the industry, given the recent Rosneft cancellation. Because SeaDrill is insuring its debt, I don't think North Atlantic will go bankrupt, not unless SeaDrill does. However, if oil prices continue to stay low for another year or two, then I have to admit the risk of that scenario will greatly increase. Only investors with long time frames and very high risk tolerances should own either of these two investments -- and even then only as part of a well-diversified portfolio.