The price of a barrel of oil changes depending on what currency you're buying it with.

Crude oil prices rose last week for the first time in more than a month, with West Texas Intermediate ending up nearly $2 on Friday, to $45.87 per barrel. But rising prices weren't the result of falling production, rising demand, or even shrinking inventory, which might show some fundamental strength in the oil market. Instead, it was the dollar that drove the price of oil higher in a frenzy of trading last week.

The dollar and oil prices may have more in common than you think. As you can see below, the drop in oil prices during the past six months has coincided with a rise in the dollar, which is no coincidence. What ties the two together explains a lot about the big fluctuations in prices last week. 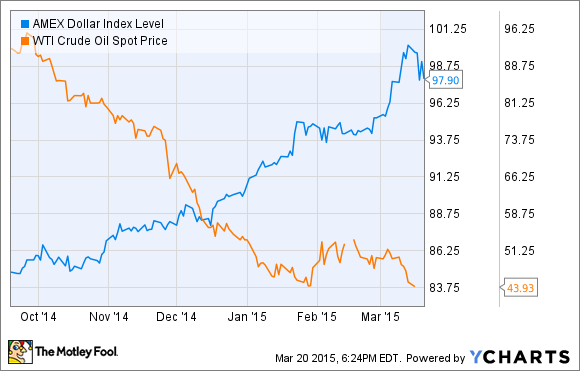 To show how this works, let's look at an example of exchange rates. Let's say we're importing a barrel of oil from Canada -- which happens to be the largest exporter of oil to the U.S.  -- and the standard price of oil is $50. If the U.S. dollar to Canadian Dollar exchange rate changes by 10% higher or lower, the effective price of oil in Canadian Dollars doesn't change; but the price in U.S. dollars swings dramatically.

There's the same effect in oil markets, which are priced in dollars, but where a majority of the world's oil is consumed outside of the U.S. As the dollar fluctuates, it can swing the price of oil wildly within the U.S.; but if you're in Canada or Saudi Arabia, you may not see the same impact on your local currency.

This is essentially what happened last week with oil prices. The dollar plunged in value after the Federal Reserve concluded its policy meeting, and that had the effect of raising oil prices for the week. None of this changes the fundamental oversupply in the oil market, which has caused prices to drop more than 50% since last summer. Both short and long term, however, the relative strength or weakness of the dollar has a big impact on oil prices.

Ying and yang of the strong dollar
From within the U.S., movements of the dollar can have either a positive or negative impact in energy markets, depending on where you sit. Clearly, a strong dollar and resulting lower oil prices are good for consumers, who are saving hundreds this year at the pump.

But the same dynamic cuts the opposite direction for oil explorers in the U.S. Shale giants like Continental Resources (NYSE:CLR), Whiting Petroleum (NYSE:WLL), and SandRidge Energy (NYSE: SD) are seeing lower sale prices for their oil and no change in costs because they're domestic producers. If the dollar continues to strengthen, they'll be put under even more financial pressure, and may have to sell assets, or look for a buyer for their companies just to stay alive in this market.

Currency fluctuations may have a bigger impact on energy markets than you think, and last week was just a small example of that. Long term, the industry needs to see supply come more in line with demand for oil prices to rise; but a strong dollar doesn't help the financial situation of U.S. companies, either. The bad news is that currency moves are entirely out of the industry's control.