Grocery store chain Kroger (KR 3.28%) is trouncing the market over the last year -- up 75%. Let me put those returns in context against one of the most exciting stocks around: Apple.

Kroger earns a minuscule 3% profit margin, compared to the tech giant's 30%. But Kroger investors have Apple shareholders beat over the last year. And Kroger's returns are also roughly even with the Mac maker's over the last five years. 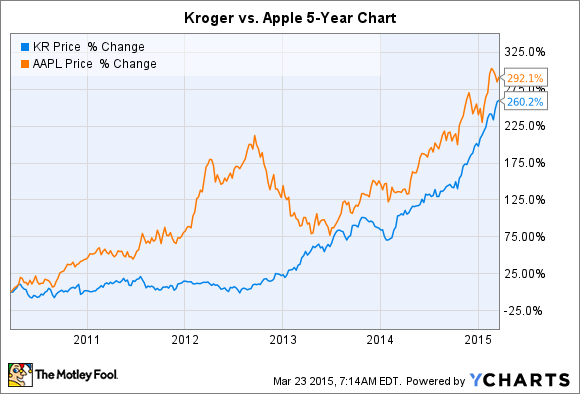 Investing in Apple on the day it launched the iPad has been just as profitable as buying Kroger when it announced a small -- but still market-leading -- 1.2% same-store sales gain in early 2010.

Price target upgrade
One Wall Street pro thinks Kroger's shares have plenty more room to run from here. Deutsche Bank analyst Karen Short last week hiked her price target from $80 to $90 per share, which would be an additional 17% gain for one of the market's best-performing stocks.

It's hard to find fault with Short's reasoning. She did channel research checking prices in Kroger's Denver market against competitors like Whole Foods (WFM) and Sprouts Farmer's Market (SFM 3.00%) and found that Kroger's prices match up well against these rivals, particularly in the organic and natural foods segment. That speaks to Kroger's competitive advantage, according to Short, and suggests more market share gains ahead.

That price dominance shouldn't come as a surprise. Kroger spent a whopping $3.5 billion on price cuts last year, which is more than it books in annual profits. And many of those cuts were targeted at organic shoppers. CEO Rodney McMullen told investors earlier this month that the goal was to make organic premium products "affordable and accessible to all customers." Organic groceries are growing at a double-digit pace, compared to about 3% for the broader industry.

A few key advantages allow Kroger to offer those unbeatably low prices. For example, its $110 billion annual sales base gives it huge leverage with suppliers. Compare that against Whole Foods' $14 billion of revenue, or Sprout's $3 billion. Kroger also controls many of its own manufacturing plants, including an organic milk factory, which gives the grocer added flexibility on pricing.

Holding the line on prices lets the company steal customers from its main competitor, Wal-Mart (WMT 5.11%), but also from fast-growing, highly profitable grocers like Whole Foods. In fact, Kroger in 2014 just finished its 10th straight year of market share gains.

Kroger's valuation
The case for Kroger's stock marching higher from here involves a valuation multiple that's becoming more like Costco's and less like Wal-Mart's. At $90 per share, the grocer would be priced at 26 times trailing earnings, just below Costco's 30 times valuation. But at that point Kroger would still be cheap in comparison to Whole Foods, Sprouts, and Target. 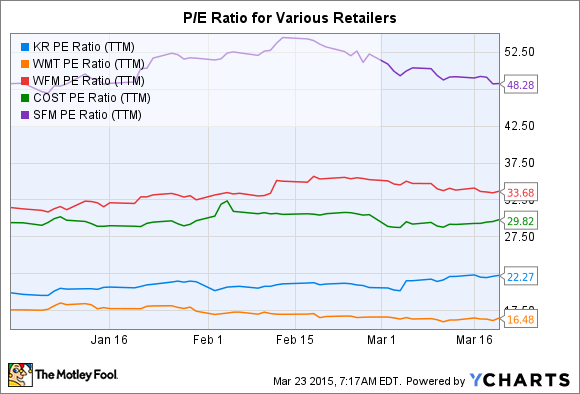 That's why it's not crazy to think that Kroger's stock can reach $90 per share. Yes, it would put the company at a big premium for a simple grocery store chain. But Kroger is earning the valuation boost by building a larger, more loyal customer base.

Five years ago when the stock was below $25 per share, management claimed that the small but persistent gap between Kroger's same-store sales growth and those of its competitors had "extremely positive implications for our associates, customers, and shareholders." That's still true today, even after the stock's strong five-year run.