Can a taxi lender survive in a world Uber and Lyft are taking over?

Medallion Financial Corp. (MFIN 0.97%) prides itself on its lending record. Because the collateral backing the majority of its loans (taxi medallions) has historically only risen in value, its performance over the years has been exceptional. But as taxis come under threat from companies like Uber and Lyft, these dynamics could quickly change.

The economics of the taxi business
If you want to drive a taxi, you have to own or lease a medallion. Given the huge supply and demand imbalance, medallion prices in major metropolitan areas frequently top $250,000. In New York City, prices peaked at over $1 million. Given financing costs of roughly 4%, a medallion is often one of the largest costs of doing business for taxi drivers.

In the past, owning a medallion made sense. Taxis had a monopoly on transportation from point to point. Fares made up for the amortized cost of the medallion, depreciation on the car, and fuel costs, and there was still some left over for the driver's profit.

Today, the economics aren't so favorable for taxi drivers. Ride-sharing apps like Uber and Lyft make it possible for short-distance travelers to hire an individual to transport them from point A to point B. The driver, who does not operate as a taxi service nor own a medallion, has a natural cost advantage on traditional taxis with just one restriction: Taxis can pick up street hails; Uber and Lyft drivers can only pick up people who request a ride through their respective mobile apps.

In effect, a medallion is nothing more than the right to pick up people from the street. Ultimately, the question is whether this additional source of business for taxis is worth the high price for a medallion.

Recent events in the medallion market
In New York City, medallion prices have fallen 25% from their peak in 2014 and the market has become less liquid. Medallion sales data is proving to be even more problematic. In the six months from September 2014 to February 2015, 10 unrestricted taxi medallions were sold in arms-length transactions in New York City. Half were due to foreclosure. Prices fell from $900,000 in September 2014 to $800,000 in January 2015.

In Boston, reports that lenders have stopped lending against medallions appear regularly. A taxi-focused news outlet in the city shuttered its doors in February, stating that "the lending institutions are not lending any longer, nor are they advertising."

What's Medallion Financial's true exposure?
Medallion Financial suggests it has two defense mechanisms from falling medallion values. First, it lends only at 50%-75% of a medallion's market value, which it averages to a loan-to-value ratio of 60% across its loan book, up from 39% last year. Second, it cites its growing commercial and consumer loan business as a source of diversification.

Fair enough. But some accounting complexities also understate Medallion Financial's exposure to taxi medallions and its balance sheet leverage. You have to look at total "managed balance sheet" data to get an idea of its actual exposure -- all of its assets and liabilities, including those of its subsidiaries. When you do, you'll find Medallion Financial has exposure and leverage hidden from plain view. 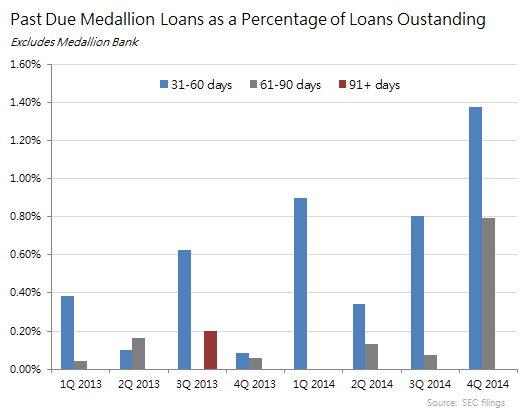 Problems would start developing well before it takes big haircuts. As an FDIC-insured subsidiary, Medallion Bank can only pay dividends back to the parent if it maintains a tier 1 capital ratio of 15% or more. Its tier 1 capital ratio was 15.5% as of December 2014, giving it very little wiggle room before dividends are cut off.

Loan to value isn't everything
Keep in mind that Medallion Financial's loan book amortizes slowly over a period of five to 25 years. Thus, its principal balances are recouped slowly, certainly much slower than the rapid decline in medallion prices over the last year. This detail is important for understanding why its loan-to-value ratio shifted from 39% to 60% from the end of 2013 to the end of 2014.

Medallion values are a moving target, and I'm worried about a perfect storm that could create a downward spiral in medallion prices. A combination of tighter lending standards, growing numbers of foreclosures and liquidations, and the possibility that borrowers won't prepay or continue to pay on underwater medallions, sets the stage for continuous declines in medallion values.

It's a simple question of risk and reward. With taxi medallion prices tumbling, and ride-sharing services growing, Medallion Financial's 10% yield doesn't adequately compensate investors for the growing risk in the business. Buyer beware.