Medallion Financial (NASDAQ:MFIN) is one of the highest-yielding stocks in the market today. As a business development company, it is required to pay out 90% of its income to shareholders, resulting in a beefy yield.

But the yield is perhaps better interpreted as a sign of a risk than evidence of enduring rewards. The company's core business -- lending to taxi companies to buy medallions -- is under incredible stress. Recent anecdotes suggest we're only in the early innings of a rapidly declining market for taxi medallions, threatening Medallion Financial's collateral values and its interest income.

A "too big to fail" operator faces a cash crunch
Gene Friedman is the king of New York City's taxi industry, and he's in a perilous position. Having grown his business from two medallions in 1995 to an estimated 900-1,000 medallions today, Friedman got rich buying medallions with borrowed money and refinancing them as prices rose. The profits were rolled into more medallions, thus creating his taxi empire.

These medallions are known as "mini-fleet" medallions, usually purchased in pairs and then leased to drivers for a fee. It's a relatively simple business, not all that different from rental real estate. Friedman, an investor, buys a medallion and leases it at a price that covers the financing costs and allows for a profit.

Unfortunately for Friedman, the highly leveraged business of using other people's money to build a medallion empire relies on a continuous supply of inexpensive credit -- credit that is becoming more difficult to find. The New York Post reported that as loans on 87 of his estimated 900-1,000 medallions came due, Friedman faced a financing problem. Citigroup, the lender, won't refinance the loans. Other banks aren't writing new loans on medallions to roll over his debt.

In a legal challenge over the medallions serving as collateral, the judge gave Friedman a month to settle the debt, but the judge might "ultimately grant the seizure request" on 87 of his medallions on April 30, according to the Post.

Pleading his case
Through his lawyer, Friedman pleaded his case to medallion lenders, suggesting they were doing themselves a disservice by reducing their participation in medallion lending. More stringent loan terms such as higher loan-to-value requirements or higher interest rates would invariably crush medallion prices. 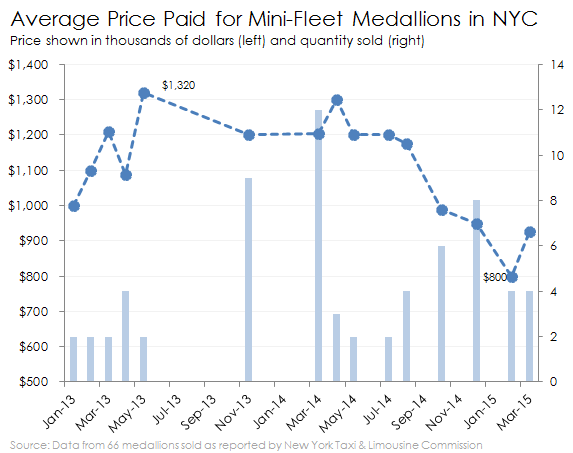 Furthermore, Citi, a massive global lender but only a small player in the world of taxi medallions, has little incentive to operate a taxi business or preserve medallion values by keeping foreclosed medallions off the market. Medallion loans in New York City are most heavily concentrated in four credit unions, two public banks (New York Community Bank and Signature Bank), and, of course, Medallion Financial, the largest taxi medallion lender.

Tightening the supply of credit
On recent conference calls, New York Community Bank and Signature Bank suggested they do not plan to expand their portfolios in the present environment. Medallion Financial trades below net asset value, making it difficult for the company to raise equity financing to make new medallion loans, and has recently diversified into consumer lending to spread its risks. The credit unions are not-for-profit entities that can do little more than grow by retaining "profits" and attracting deposits (read: they grow slowly).

It's almost a classic case of what American economist Hyman Minsky called "Ponzi finance" -- the idea that an asset can rise in value sharply due solely to lenders' willingness to lend more and more money. Taxi medallions surged in value year after year because their owners could borrow inexpensively with long amortization periods, and lease their medallions to operators at the maximum legal lease fees.

Now the tide is turning. Medallion values are falling, in part because lenders have pulled back. In addition, Friedman suggested market lease rates are now lower than the maximum legal cap, as Uber and other car-sharing services attract an increasing number of drivers, making it only that much more difficult for medallion owners to service their loans.

This is building into a perfect storm in which multiple years' supply of medallions could come up for sale even as lenders have tightened their lending standards and prices are already depressed. One of the largest drops in NYC medallion prices occurred in October 2014, when a total of four foreclosed medallions were sold. One can only imagine the impact the sale of 87 medallions might have on the market.