As promised at its analyst day in November, Twitter (NYSE:TWTR) has released a slew of new features in the first three months of 2015. From integrating more video features into the app to its algorithm-based "While You Were Away" feature, Twitter is showing investors that it's willing to try new things to attract more users and get existing users more engaged on its platform.

But new features come at a cost. Last year, Twitter spent nearly half of its revenue on R&D expenses even as revenue more than doubled for the year. Of course, that's an improvement from the 89% of revenue the company spent on R&D in 2013, but that includes the $350 million purchase of MoPub. And Twitter continues to make relatively large acquisitions. In the first six weeks of the year, the company spent about $150 million on Niche, ZipDial, and Periscope. 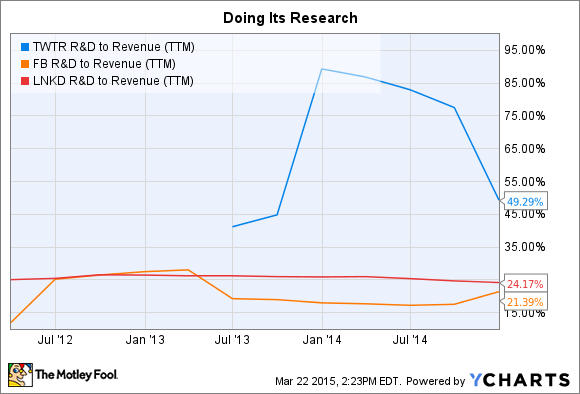 This fact shouldn't necessarily worry investors. Twitter is very good at attracting top talent for its R&D efforts, and its revenue growth attests to that. On the other hand, Twitter has gotten a lot of grief about not being as innovative as its peers, which sometimes requires them to spend heavily for acquisitions. For investors, there's a lot of risk involved when a company spends a large amount of revenue on R&D instead of padding the bottom line. Those R&D efforts might not always pay off as expected.

Expectations for Twitter are very high. Analysts expect revenue to grow another 70% in 2015. In 2016, they see growth slowing modestly to 52%. By comparison, LinkedIn is estimated to grow at a 32% clip over the next two years, and Facebook is expected to grow 35% annually through 2016. Of course, both companies have larger bases than Twitter -- though LinkedIn only modestly so.

Whether that expected growth turns into profits, however, may depend on management's decision whether to keep the pedal to the metal with R&D spending. Twitter's net income almost perfectly mirrors its spending on R&D across the breakeven line. 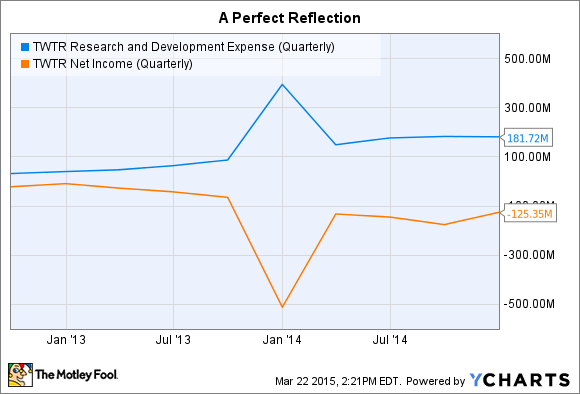 As revenue grows, it becomes more difficult for the company to continue investing such high amounts in R&D, try as it might. As a result, Twitter may see more revenue fall to the bottom line, or have extra cash to invest in other areas of the company.

It's already planning to increase its capital expenditures this year. It's establishing a third data center, which will improve the platform's performance, and it's purchasing more real estate in San Francisco and New York to expand its offices (perhaps for new R&D employees). It still plans to increase its overall ad load, which means more spending on sales and marketing. But overall, there seems to be a lot of leverage left in the company's operations.

Why Twitter Doesn't Turn a Profit -- And Whether Investors Should Worry @themotleyfool #stocks $TWTR $LNKD.DL $FB Next Article
Current