After suffering a challenging 2014, the first three months of 2015 have been a banner stretch for e-commerce giant Amazon.com (NASDAQ:AMZN) and its shareholders. 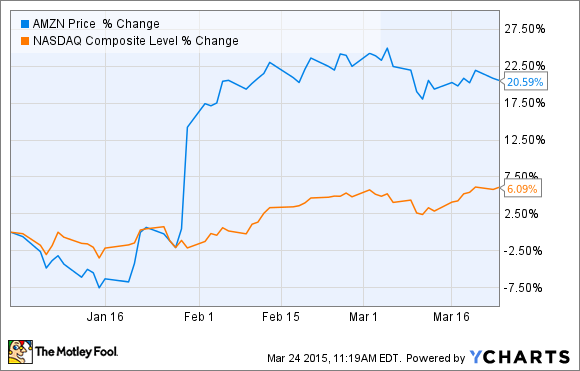 However, always the futurist, Amazon can rest assured the e-tail powerhouse remains as focused as ever on continuing to push the envelope in this massive market. And recently, two such storylines tied to the giant's delivery infrastructure surfaced that help prove this point perfectly. Let's take a look.

And as of March 19, Amazon has now expanded Prime Now into select zip codes in two more major U.S. cities: Miami and Baltimore. In the press release announcing the move, Amazon, who's famously tight-lipped in most matters, attributed the rapid rollout of Prime Now to the increasing sophistication of Amazon's fulfillment operations. Furthermore, Amazon stated it plans to launch Prime Now in more cities throughout 2015. This alone is exciting new as Prime Now could help Amazon stay well ahead of its competition, but there's another equally, if not more, interesting additional Amazon story for investors to digest as well.

Revenge of the drones
In another report for The Wall Street Journal, word also surfaced on March 19 that Amazon also received an "experimental airworthiness certificate" from the Federal Aviation Administration, which grants Amazon the rights to test its much-discussed delivery drones in the outdoors.

Ever the dispassionate corporate actor, Amazon has had a love affair with automating its supply chain as much as possible over the years. From its highly mechanized network of distribution centers to its acquisition of robot start-up Kiva in 2012, whose robots now feature prominently in those distribution centers, Amazon always had an eye toward automating its operations. Drones simply represent the next major step in the long-term tendency. According to the reports, Amazon eventually intends on using a fleet or airborne drones to deliver packages to consumers in as little as 30 minutes. It's safe to say such initiatives remains at least a few years in the future. However, both the expansion of Prime Now and Amazon's drone ambitions both say something powerful about what makes Amazon such a truly outstanding company, even in the horribly competitive retail space.

All about the customer
The Internet fundamentally changed the retail landscape. Although consumers the world over already enjoyed ample choices, the World Wide Web's ability to connect users with essentially any company created a new ubiquity of choice for consumers. The implication here is that in a world where consumers can access more or less whatever they want via our beloved information superhighway, the company most likely to win the day is the company with the best prices and the best customer experience, a fact that rings especially true in the inherently lower margin 3rd party mass retail space in which Amazon operates.

Amazon's willingness to experiment and push the envelope in its distribution with moves like one-hour Prime Now delivery or eventually drones enables the company to maintain its leadership position in online retail as the e-commerce age continues its torrent expansion. Interestingly enough, these seemingly far-flung initiatives also help demonstrate how Amazon's insistence that it invests lavishly on creating a world-class supply chain could eventually turn into a strong competitive advantage for Amazon. In five or even 10 years time, how many companies will be able to match Amazon's ease of use if it can have a significant portion of its inventory on your doorstep in 30 minutes? Wal-Mart and Target perhaps, but probably not many.

Amazon is, and will remain, a company that some find frustratingly focused on the future. However, it's also critical to remember that e-commerce sales still represented just 6.2% of all U.S. retail sales in the first quarter of 2014, according to the U.S. Census Bureau. E-commerce as a category remains very much in its infancy, and Amazon has signaled its intent to be the leader in the space for the better part of the past two decades. So while its margins will likely remain low for years to come, seeing Amazon continue to push the envelope with initiatives like its drone delivery project and Amazon Now service, I'm all the more confident that Amazon's best days remain firmly in front of it.