Growth and dividends may not seem like they go hand in hand, but here are three great examples that can give you the best of both worlds.

Growth investing is a broad term that refers to an investment strategy focused on finding stocks with above-average growth potential. At first, finding dividend stocks for growth investors might sound like a bit of a contradiction. After all, isn't the point of dividend investing to create income and stability?

While this is true, many investors don't realize that a lot of dividend stocks produce market-beating growth even while remaining more stable and predictable than their nondividend counterparts. With that in mind, here are three excellent dividend stocks that could work very well in a growth investor's portfolio.

Lots of potential at a discount
Although it isn't exactly a "high-dividend" stock, American Express (AXP 2.29%) represents an excellent value to dividend investors right now.

After losing its exclusivity agreements with Costco and JetBlue, American Express has declined by more than 12% so far in 2015. While the company's earnings will certainly suffer in the short term, there is still significant growth potential. 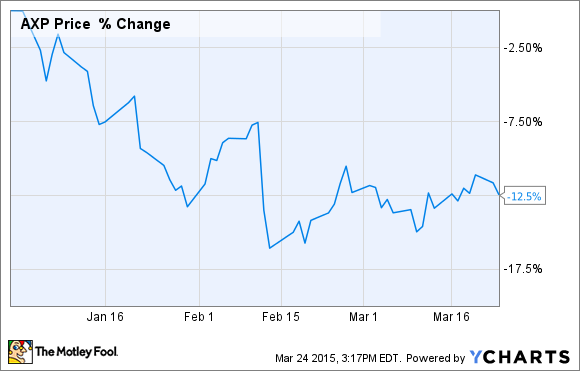 Even after the setbacks, American Express is still the best at what it does -- creating premium credit card products and smart payment solutions that allow it to charge a premium over its competitors. CEO Ken Chenault recently said American Express should achieve its goal of 12%-15% annual earnings growth over the long term, which (if accurate) makes the company's valuation of less than 15 times earnings seem extremely cheap.

Excellent record of growth and stability
When it comes to a combination of income and growth, it's tough to beat commercial real estate. A great way to play this business for dividend investors is with a real estate investment trust such as National Retail Properties (NNN 1.50%).

Why commercial real estate? Basically because it has the same strong income and growth potential as other types of real estate (like residential), but with much more stability. For example, commercial tenants generally sign long-term leases of 15 years or more with annual rent increases built in, so there is relatively little turnover. Also, commercial tenants pay most of the variable expenses that come with property ownership, such as taxes, insurance, and maintenance. All the company has to do is sit back and collect a check.

The company owns more than 2,000 retail properties, which it leases to high-quality tenants, many of which are household names such as SunTrust Banks and Best Buy. National Retail Properties maintains a 98.6% occupancy rate, and the long-term nature of the leases leaves little chance of any major income interruptions in the near term.

Finally, you can't beat National Retail Properties' track record of growth and income. The company pays a handsome 4% annual dividend yield, and the payment has been increased for 25 consecutive years. Over that 25-year period, investors' annual returns have averaged 15.9%, which is an incredibly high level of performance to maintain over such a long time period.

A market leader expanding aggressively
Carnival (CCL 9.19%) is the world's largest cruise line operator, about twice the size of its closest competitor. Despite this fact, this dividend payer still has pretty ambitious growth plans.

Since 2010, Carnival's passenger capacity has grown by about 11%, or just over 2% per year. However, since demand for cruises grew at nearly 6% per year over the past decade, there is less danger than one might think of the industry becoming oversaturated anytime soon. If anything, supply isn't keeping up with demand, so revenue per passenger could climb if this trend continues.

Perhaps most intriguing from an investment perspective is Carnival's expansion into China. Carnival was the first to enter the Chinese market in 2006, and now has four ships based there, the most in the industry. China is the fastest-growing cruise market in the world, and Carnival President and CEO Arnold Donald has said the company expects the nation to grow into the world's largest cruise market over time, and that Carnival's Chinese development strategy is accelerating.

Carnival believes it can produce double-digit return on invested capital going forward, and analysts seem to agree, with Carnival's earnings per share expected to grow from $1.96 in 2014 to $3.26 in 2016. So not only is Carnival already the top cruise operator, but it has seemingly limitless growth potential in the most populated region in the world.

How to find more
These three stocks don't represent all of the good dividend stocks out there that work for growth investors -- far from it. However, they seem to have a few things in common that you could apply to your own search.

Basically, all of these stocks are growing, or are projected to grow at a rate that more than justifies their current valuation. And there is a clear catalyst for continued growth. For example, Carnival's expansion into China.

If you apply similar logic to the stocks you're considering, you'll be able to add your own stocks to the list of the best dividend stocks for growth investors.

How Many Credit Cards Should I Have?

The Only Reason to Pay Credit Card Fees