Please ensure Javascript is enabled for purposes of website accessibility
Log In Help Join The Motley Fool
Free Article Join Over 1 Million Premium Members And Get More In-Depth Stock Guidance and Research
By Rich Duprey - Mar 28, 2015 at 8:01AM

Both restaurant operators suffered falling sales and they both see divestiture as the solution, but only one has turned itself around

At the rate of its declining sales, it's going to be lights out soon at Romano's Macaroni Grill.

The owner of Joe's Crab Shack and Romano's Macaroni Grill finds itself in the exact same position Darden Restaurants (DRI -1.23%) did two years ago.

Comparable sales at the seafood restaurant fell 4.9% last year while they were off 4.5% at the Italian food chain, similar to the falling sales suffered at Red Lobster and Olive Garden that undermined the performance of Darden's LongHorn Steak House and smaller specialty restaurants.

But Ignite Restaurant Group (NASDAQ: IRG), the owner of Joe's, Romano's, and the growing Brick House Tavern + Tap concept chain, is taking the exact opposite approach from what its industry peer did. Where Darden sold off the seafood restaurant and committed itself to rebuilding its Italian eatery (over the objections of the hedge funds who wanted to dump both concepts), Ignite is selling Romano's Macaroni Grill and keeping Joe's Crab Shack.

With shares of Ignite having plunged 62% over the past year, that could be a critical difference in it being able to recover.

The burned hand learns best?
On the surface there's some sense to its decision. Where Romano's has been failing ever since Ignite acquired it in April 2013 for $55 million (and shortly after Ignite had its IPO), Joe's at least enjoyed a period of expansion before it all turned south. 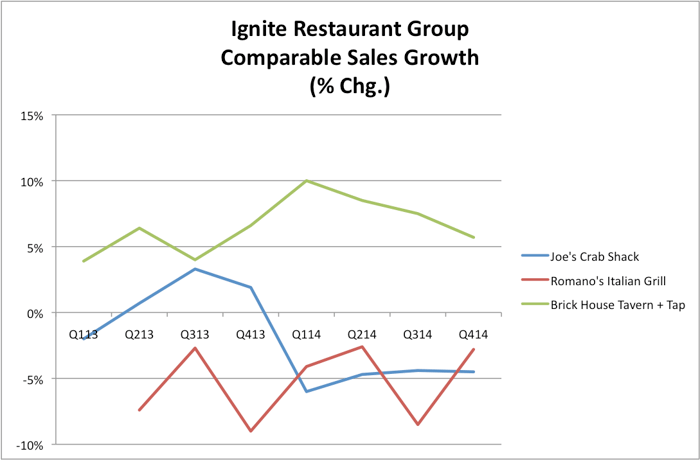 And the diminutive price that private equity firm Redrock Partners just agreed to pay for the Romano's chain shows just how little value may be left in the concept. While Ignite also got it at a discount compared to the $88 million Golden Gate Capital paid in 2008 when it bought Romano's Macaroni Grill from Brinker International, Redrock is paying Ignite only $8 million. You read that right: eight million dollars.

However, Darden's Olive Garden had similarly gloomy stats, but its efforts at a turnaround seem to be paying off. After posting falling comps in 20 out of 23 months, Olive Garden has now gone on to eight straight months with higher comparable restaurant sales. Operating income, which had been in free fall, is now recovering with margins rising in the third quarter. Companywide, quarterly operating income rose 65% from last year.

And just as Red Lobster had been a stellar performer for Darden before falling on hard times -- seemingly without hope for recovery -- we're seeing Joe's Crab Shack stumble as well. In fact, over the past year, Joe's sales performance has more often than not been worse than Romano's. Although the Italian food chain does look damaged, Joe's may not be in any better position to stage a comeback as Ignite is already two-thirds of the way through the first quarter of 2015 and it's still running low single-digit negative comps.

While Romano's is still recording operating losses (they did narrow slightly last year however), Joe's saw its operating profit slashed 53% in FY14. Obviously the profitability is behind Ignite's decision to hold onto Joe's rather than Romano's, but seafood chains are riding some stormy seas these days.

This goes beyond Red Lobster and Joe's. Privately held Long John Silver's deal to be acquired fell through in January. Bloomin' Brands is having something of a struggle at its upscale Bonefish Grill, too. Comparable sales grew just 0.7% in the fourth quarter, largely as a result of a 2.7% increase in menu prices as traffic to the chain was down 0.7%.

Follow the money?
Management says Joe's will serve as Ignite's primary generator of free cash flow while Brick House Tavern + Tap will be its growth vehicle, but that might not be so easy to achieve.

The 4.5% drop in comparable sales experienced in the fourth quarter was primarily the result of a 6.5% drop in the chain's guest count, only partially offset by price hikes and a negligible bit of menu mix. Now it says it's hoping to turn things around by offering more discount items on the menu, which could cut further into any potential profits. And Brick House's gains seem to be slowing too.

While it seems counterintuitive that Darden can make a go of it with Italian food considering the supposed concerns consumers have over healthy eating, seafood also faces rough seas. Sure there's a natural affinity between fish and the latest buzzwords of "protein" and "low-fat," but seafood is a high-cost item that all-too often is served fried, negating any health benefits.

Two for the price of one
Italian food isn't an easy sell either because of those same health concerns, and it just might be that the hedge funds that advised Darden Restaurants to separate both Red Lobster and Olive Garden from the rest -- and who are now running the show at the restaurant operator -- were right all along.

Ultimately, Ignite Restaurant Group may not have any good options. Romano's Macaroni Grill was sucking the life out of the business, but Joe's Crab Shack is stumbling right behind it. Ignite can't sell the seafood chain, as it will remove the one thing that's pumping any real money into the business at the moment, but it's not enough to provide it with the funds to finance growth. It's got potential at the up-and-coming Brick House Tavern + Tap chain, but no real means to fund its expansion.

Faced with such choices, investors would do well to fish these waters carefully and do a catch-and-release if they find Ignite Restaurant Group's stock in their nets or their portfolios. There are bigger and better fish in the sea.

Follow Rich Duprey's coverage of all the restaurant industry's most important news and developments. He has no position in any stocks mentioned. The Motley Fool has no position in any of the stocks mentioned. Try any of our Foolish newsletter services free for 30 days. We Fools may not all hold the same opinions, but we all believe that considering a diverse range of insights makes us better investors. The Motley Fool has a disclosure policy.

Is It Too Late to Buy Dutch Bros Stock?