Retirement brings major changes to your life. Make sure you're ready.

When it comes to retirement, most people have a picture in their minds. It may be pursuing an interest or a passion, traveling, or just putting up your feet and getting out of the Rat Race. No matter the ways your dream retirement may differ from that of someone else, we all have a common thread: We want to be independent in retirement.

Unfortunately, there are a lot of surprises that can affect that dream. As the saying goes, "Life is what happens when you're busy making plans." However, you can take steps to minimize the unexpected surprises life can throw at you -- and keep your retirement from getting derailed.

Read below for information from several industry experts on steps you can take to have the retirement you want, while also preparing for the unexpected.

​Savings and Investments: Have a cash cushion, but think long term, too
One of the most important financial defenses anyone can have is cold, hard cash. For those still working, the goal is to have at least one year's worth of expenses in cash in case of a temporary loss of income. The goal here is to keep from ever having to dip into retirement savings until you're actually retired.

If you're retiring, you may want to consider having even more cash available, especially if you're counting on investments to provide a major source of your retirement income. While pension and Social Security checks are regular and dependable in many cases, if you are counting on retirement savings in a 401(k) or IRA for a large portion of your income, many experts recommend having as much as 30% to 40% of your retirement portfolio in cash-equivalent investments and government bonds, versus stocks.

Here's a good example of why: 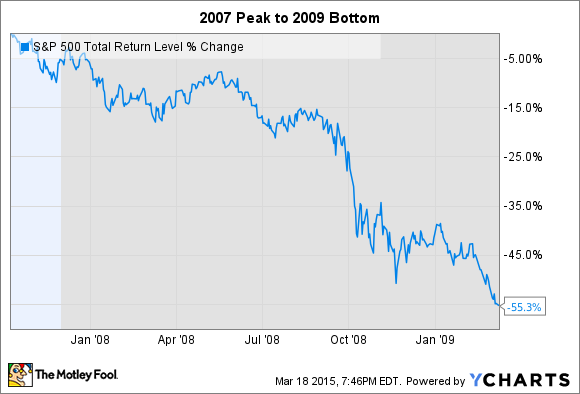 There's just no reliable way to predict what the market will do in the short term, so keeping a multiple-year cash cushion can prevent you from having to sell stocks at rock-bottom prices just to pay the bills. It lets you weather the storm so that your portfolio can benefit from the eventual recovery, such as the one we've seen over the past few years: 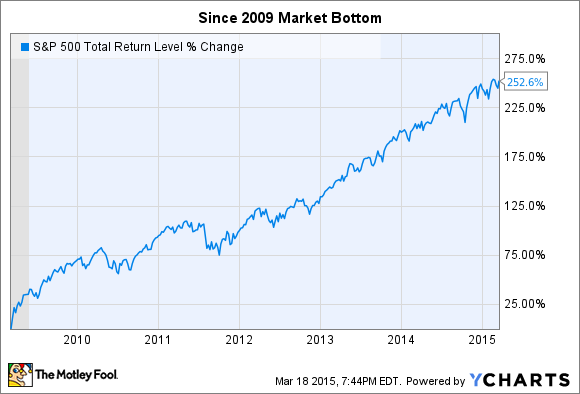 AARP Bulletin Financial Columnist Jane Bryant Quinn says the following is the most important thing she would tell pre-retirees:

Sock away every dollar you can. Make a tentative, one-year retirement budget, based on probable expenses and known sources of income. As a proxy for how much you'll draw from your financial investments in the first year, use 4 percent. If you can't match your expenses to income, replan your retirement. Maybe you should work longer. Maybe you should sell the house. The budget will start you on the right track. If you're married, make the plan together with your spouse. It will work only if you both agree.

She also pointed out that someone a few years from retirement will probably live 30 or more years, "and that means stocks for growth." Mrs. Quinn isn't a fan of owning individual stocks, recommending low-cost index funds as the best way for most people to invest. She also has some great suggestions based on sound long-term planning:

Don't try to live on dividends and interest. Reinvest them and make your planned withdrawals from the corpus as a whole. I consider withdrawals from savings a reliable source, if you're following the 4% rule. But you have to follow the plan. It won't work if you sell when the stock market falls. Mixed stock and bond portfolio, rebalanced, with a cash reserve for the 4% withdrawal at times when the market is really bad. Immediate-pay annuities are reliable -- good for people who want to stretch their savings and create a regular monthly check. Buy in your later 70s, not at 65.

Housing and debt: Avoid the trap
A recent study from the U.S. Consumer Finance Protection Bureau highlighted a troubling trend among retirees. While those over 65 represent the largest demographic of people who own their own homes (more than 80%), over the past decade-plus, a growing percentage of retired homeowners are carrying a mortgage into retirement.

The report detailed a troubling trend of increased rates and levels of mortgage debt among those 65 and older: Here's why that's such a big deal. From the CFPB study:

Carrying a mortgage past 65 has already affected a lot of would-be retirees who have been forced to remain in the workforce past their anticipated retirement age. There's some evidence that we are seeing unintended consequences of this trend as well, with many in the so-called Millennial generation having a much tougher time finding jobs, in no small part because their parents can't afford to leave the workforce.

Even if you can afford to retire today with mortgage debt, if the mortgage cost eats into your retirement savings, that could weaken your preparedness for the unexpected later in life.

Preparing for the unexpected
There are a number of risks we all will face in our later years, including illness, injury, and the potential financial impact our death would cause our families. I spoke with online insurance broker Accuquote founder and CEO Byron Udell, and he had the following to say to people closing in on retirement:

It's time to get real. If you're not yet independently wealthy, you're not likely ever going to be. So, if there is anyone else in the world that depends on you financially, you would need to have a life insurance policy in place that cannot be canceled, that will last, and be IN FORCE when you die whether that's tomorrow or 25 years from now. It would have to have a death benefit large enough to take care of those you care to take care of... spouse, children (even adult children if I care to leave them any sort of legacy beyond my personal possessions). The odds of death are one out of ONE. It will happen. And you will either die having taken care of this, or not. Your choice.

The odds of needing long term care in retirement (either in-home care, or skilled care) is 70%. The odds of either you or your spouse needing this care is 91%. This care isn't cheap, and the cost goes up every year. Again, if you're rich, no worries. But if you're not, unless you relish the thought of your loved ones changing your diapers one day, you might want to consider long term care insurance, or consider life insurance with a rider to allow you to access your death benefits if you need the money for long term care.

Finding purpose (or income) in retirement
While taking some time off soon after retirement is probably a good idea, there's a lot of evidence that retirees who walk away from the structure or purpose that their career provided may not have the kind of happy retirement they expected. A number of studies have reported that retirees who plan what they will do -- specifically managing their free time -- tend to be happier and more satisfied in retirement.

The reality is, a life of leisure sounds good, but it's rarely fulfilling or stimulating enough for most retirees. Further, you may need income in retirement, and a new career that requires less time, lets you pursue something you love, or simply takes advantage of your skills might be the right way to go.

Kerry Hannon, author of Love Your Job: The New Rules for Career Happiness and Great Jobs for Everyone 50+: Finding Work That Keeps You Happy and Healthy ... And Pays the Bills, pointed out that oftentimes, retirees have special skills and experience that can make them valuable to small businesses, associations, and nonprofits, since they can often immediately contribute without the time and investment that training someone without experience might require.

She also described how retirees can actually use their newfound flexibility to their advantage. Have an RV, but your retirement income is a little short of letting you take that cross-country trip? There are potentially thousands of jobs offered by companies like Kampgrounds of America for working campers, who may travel from campground to campground on work assignments that typically include a free space, plus an hourly wage for 20 or 25 hours of weekly work.

Other ideas include riding the "age wave," of increased demand for services like healthcare or patient advocacy; helping retirees plan and manage a downsize or relocation; or any number of services those early in retirement can provide to people in their later years. Something as simple as applying for part-time work at busy stores that you happen to shop at might be all it takes, too.

The key takeaway, here, is that whether it's for income, filling your time with something you want to do, or both, working in retirement may be the right way to go. If you don't need the income, consider nonprofits in your area that could probably use your time as a volunteer.

Last thoughts: At least you have your health
At the end of the day, the better your health, the more likely you are to have a better retirement. Yes -- there are unexpected illnesses and injuries you can't predict, but studies show that those in and close to retirement say that health is one of the -- if not the -- most important things for a good retirement. The interesting thing is, many of the things above are tied to your health and well-being, as they can keep you active, financially secure, and less stressed.

While this article may not cover everything you need to know, it's a starting point to get you on the right track. Whether you're a few years from retirement or just starting your first "real" job, it's never too late to take steps to protect your future.