Canadian Solar (NASDAQ: CSIQ) has generated some of the highest returns for shareholders in the solar industry over the past two years. In the meantime, it has also become one of the industry's largest manufacturers and a powerful project builder.

What don't you know about Canadian Solar? Here are five things that might surprise you.

This allows for scale and diversification in the solar industry. Scale is important for cutting costs to remain competitive, while diversification is key to surviving the ebbs and flows different solar markets go through on a regular basis.

Canadian Solar isn't all that Canadian
As of the end of 2013, 6,929 of Canadian Solar's 7,736 employees worked in China, and 2.1 GW out of 2.4 GW of solar module production was in China. All of the company's ingot, wafer, and cell manufacturing was in China.

The company's headquarters may be in Canada, but according to the company's SEC filing, "Our principal place of business is located at No. 199 Lushan Road, Suzhou New District, Suzhou, Jiangsu 215129, People's Republic of China."

When you add in the fact that Canadian Solar has received favorable loans from Chinese state-run banks, it's hard to argue that this is a Canadian company at all. Sure, headquarters are in Canada, but there's not much that's Canadian about Canadian Solar.

Canadian Solar has made a windfall in Canada
The module manufacturing facility that's located in Canada did have one big impact on Canadian Solar over the past few years: It allowed the company to win utility scale project bids in Ontario that required local content, leaving very few competitors.

Just this week, the company sold a project in Canada for a whopping $4.90 per watt, about double what a utility scale project would sell for in a competitive market. It's no coincidence that the company has swung from huge losses to a large profit because of this windfall over the past two years. 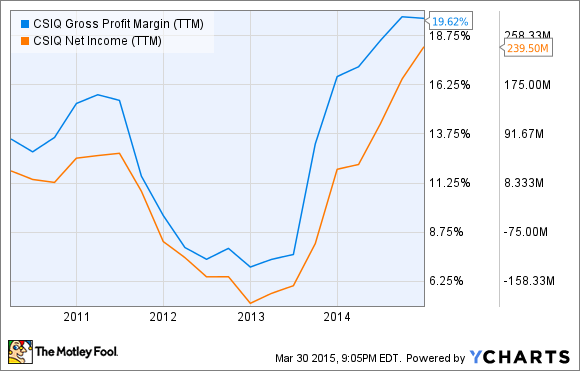 But that windfall won't last
The problem with the Canadian windfall is that it won't last. In 2013, Canada dropped local content requirements and lowered the subsidy it was giving to installers. The result is a far more competitive market that will result in lower margins for Canadian Solar.

The impact is already starting to be seen in the company's financial reports. Not a single new project was added to the Canadian backlog in 2014, and after selling 50 MW of projects for C$311 million in Q4 (C$6.22 per watt) the company is expecting C$900 million in revenue from 275.6 MW of projects (C$3.27 per watt) in 2015. The windfall is nearly over, and Canadian Solar's profits could plunge as a result.

A yieldco could be coming in 2015
Yieldcos are the newest fad in the solar industry, and Canadian Solar is preparing to enter the market. Projects that it currently sells will be put into a separate business, which will then pay cash flows to investors, including Canadian Solar.

It's unknown exactly when the yieldco will launch, but it'll probably be late this year or early in 2016. This will help off take some projects from the Recurrent Energy acquisition Canadian Solar made for $265 million last year.

The yieldco strategy will add value if Canadian Solar can add profitable projects to the backlog, but in a crowded yieldco environment this is hardly a novelty for investors. By then, interest rates may even be higher, which could pressure project returns as well.