According to Street Insider, analyst Romit Shah from Nomura Securities recently upgraded shares of chipmaker Broadcom (NASDAQ: BRCM) from a "neutral rating" to a "buy." The analyst said that his team had been waiting for both a pullback and a catalyst and believes that they "got both last week."

The analyst notes that Broadcom "remains very cheap" at 15 times free cash flow (excluding share-based compensation). This, Shah writes, is a discount to a peer average of 18 times. This discount, he claims, "reflects distrust in management after one bad acquisition and failed attempts in baseband."

For some context, the "bad acquisition" Shah refers to is the 2011 acquisition of network processor company NetLogic for $3.7 billion. Broadcom took an impairment charge of $501 million related to the NetLogic acquisition in 2013. Further, the "failed attempts" in baseband refer to Broadcom's long and expensive attempt to become a major cellular chip provider. Broadcom purchased Beceem Communications in 2010 for $316 million to try to speed up its time-to-market into the 4G market.

Those efforts didn't work, so Broadcom picked up the former Renesas Mobile wireless assets to help get 4G products out to market faster. Renesas Mobile gave Broadcom a fully qualified LTE modem, and products based on the Renesas technology actually shipped into the market. However, facing very tough economics, Broadcom ultimately wound down its cellular efforts.

At any rate, Shah points out that management "deserves more credit." In particular, he says that "almost every company botched baseband" and then drew attention to some of the improvements Broadcom is making to "right the ship."

A more shareholder-friendly Broadcom
Shah was keen to point out that Broadcom is trying to "reduce stock option expense," increase capital returns, and "improve financial transparency."

Digging a bit deeper into this, note the following slide that CFO Eric Brandt showed at the company's analyst day late last year: 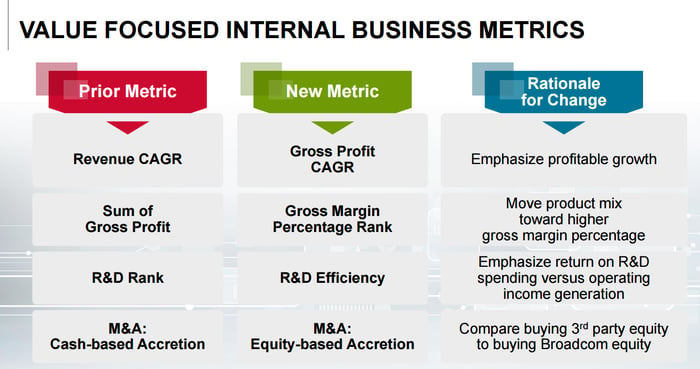 With respect to stock option expenses, Brandt talked about how Broadcom plans to bring down share-based compensation as a percentage of revenue. It also plans to try to reduce the company's share count.

Finally, Brandt said that the company's long-term financial model would change. Excluding share-based compensation, Broadcom wants to target a gross profit margin percentage range of 54%-57% (up from 50%-52%) and operating margin range of 23%-28% (up from 20%-22%).

$50 is the analyst's price target
Broadcom stock closed Monday at $44 per share, and based on the drivers mentioned above, the analyst thinks that the stock could hit $50 (likely over the next year, as analyst price targets are generally one year out).

I don't have access to Shah's full research report, but it's not hard to see where the $50 price could be coming from. The analyst may be assuming that Broadcom sees multiple expansion as the "discount" he mentions is removed. At 18 times current year earnings-per-share estimates, Broadcom's shares would trade at around $50.