Analysts are bullish on TSMC's opportunity in chip packaging, but it's important to do a reality check on the size of the opportunity in the near term.

TSMC has traditionally manufactured chips for its customers, but the customers have those chips "packaged" at third parties. By offering chip packaging services, TSMC could capture more value per chip sold, increasing sales and gross profit dollars.

Furthermore, according to Morgan Stanley, TSMC's new integrated fan-out packaging technology could allow for thinner chip packages, leading to thinner and lighter smartphones. Apple (AAPL -3.00%), according to the analysis, could be an "early adopter," driving as much as $600 million in incremental revenue for TSMC during 2016 under the assumption of $3 in packaging cost per chip and 200 million chip orders.

Sounds great, but is this realistic?
I don't doubt that TSMC has an opportunity to increase its revenue via its packaging services. I also wouldn't be surprised if Apple were to quickly adopt TSMC's latest packaging technology in order to make a thinner iPhone in 2016.

However, I take issue with the unit/revenue assumption. There's no issue with assuming 200 million high-end Apple chips sold in 2016 between the latest iPhone and iPad. However, I don't think TSMC will grab all of the leading-edge chip orders from Apple that year.

Cowen analyst Timothy Arcuri (via Barron's) said TSMC is expected to get the majority of Apple's A9 orders for the iPhone 6s, but that Samsung (NASDAQOTH: SSNLF) remains in the mix. Only time will tell, but my expectation is that neither TSMC nor Samsung will have 100% of the A10 chip orders, either.

Intel (INTC -2.31%), too, has said it would like to more aggressively enter the foundry market. It also offers its own chip packaging services, and has cited this tight integration of chip manufacturing and packaging as a key advantage: 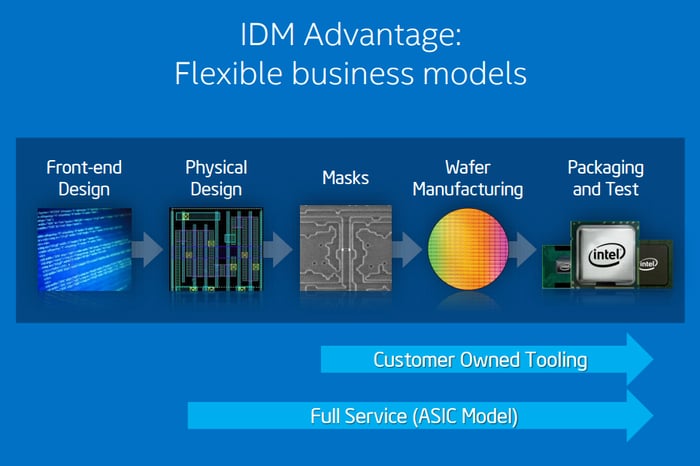 By offering packaging in-house, TSMC not only captures more value, but it becomes more of a "one-stop shop" for its customers. This convenience could further help it defend its turf against Samsung and Intel. This is seemingly confirmed by a DigiTimes, which reported that TSMC hopes to leverage this integrated fan-out technology to win Apple's A10 orders.

One more thing...
Even if we assume TSMC wins the overwhelming majority, if not the entirety, of Apple's A10 orders, there is no guarantee the company would win all of the packaging orders. According to a DigiTimes report, Apple split the A8 chip packaging orders among no fewer than three suppliers.

I could see TSMC winning the majority of the A10 packaging orders, but it's in Apple's best interest to diversify its suppliers if possible; don't be surprised if TSMC doesn't win 100% of the packaging orders for whatever portion of the Apple A10 chips it ultimately produces.

Where Will GigaCloud Stock Be in 1 Year?