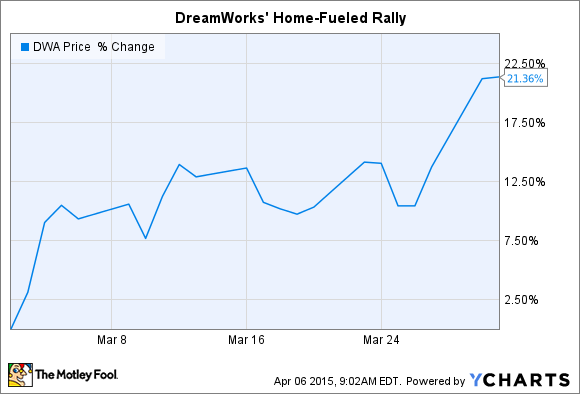 So what: The stock jumped in response to the surprisingly strong box office results of DreamWorks' animated film Home. That movie pulled in $52 million over its opening weekend, for the company's best launch since 2012. The result was especially good news for shareholders, considering that Home is an entirely new property. In other words, Home didn't benefit from a built-in fan base like the one that helped How to Train Your Dragon 2 perform so well in theaters last year.

Now what: But now comes the hard part for DreamWorks. Home is the company's only movie release of the year, compared to three films in 2014. Going forward, management has scaled back the pace of production to just two feature films per year, down from the three-a-year schedule it had been working.

The next few years will bring sequels that are likely to do well at the box office (The Croods 2 and Kung Fu Panda 3), along with some riskier, fresh intellectual property (Trolls and Boss Baby). In the meantime, CEO Jeffrey Katzenberg and his management team need to make significant cuts in movie production costs while ramping up DreamWorks' television content business.