The market hasn't been too kind to the offshore drilling industry. Drilling contractors have lost between 40% and 80% of their market value over the last eight months as they increasingly face prospects of "idling" costly, sophisticated rigs. While the market's action seems justified in the face of deteriorating market conditions, a few of these companies with strong balance sheets and a well-contracted backlog of projects might well have become undervalued. And if we look down history, consolidations in the oilfield services industry aren't uncommon with bigger players always been on the lookout for opportunities to consolidate their position in an ultra-competitive industry. . 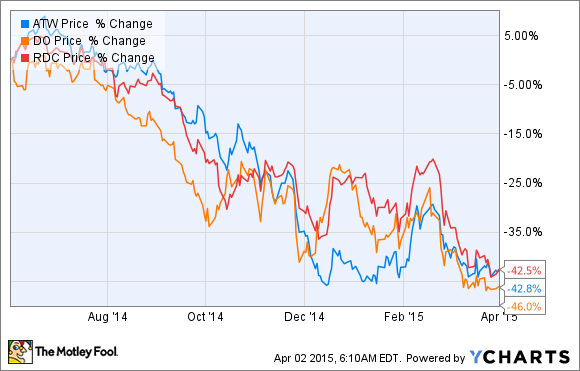 History suggests M&A chances are wide open
Within the oil and gas industry, the oil-field services sector has possibly witnessed the largest number of mergers and acquisitions over the past few years. In an industry with high barriers to entry, and in which a company's reputation matters, this isn't particularly surprising. Offshore driller Noble Corp. (NYSE:NE) bought privately held Frontier Drilling for $2.16 billion in June 2010 in order to enter new markets. In February 2011, Ensco (NYSE:VAL) acquired Pride International for $7.3 billion to consolidate its position and become the world's second-largest offshore driller. The deal increased Ensco's presence in deepwater drilling substantially, particularly in the growing markets of Brazil and West Africa.

In the services side of the business, Halliburton (NYSE: HAL) is acquiring rival Baker Hughes (NYSE: BHI) for a staggering $35 billion, pending statutory approvals. Similarly, Schlumberger (NYSE: SLB) acquired Smith international for $11 billion in 2010. Additionally, there have been plenty of smaller deals .

Why the current environment is conducive for a deal
Thanks to the precipitous fall in oil prices, project backlogs for offshore drillers are slowly drying up. For many of them, this has also increased the dreaded prospect of "idling" high-quality rigs in the near future. In a quest to enter the lucrative ultra-deepwater drilling business, several companies raised debt in order to acquire costly specialty rigs. Many of them now carry substantial debt on their balance sheets, while their capital expenditures remain high with newbuilds in the order pipeline. This situation forced Seadrill (NYSE:SDRL)to suspend its dividend, while Transocean (NYSE:RIG) and Ensco slashed their shareholder payouts by 80%. In many ways, the market's action of repricing the offshore drillers is justified. But many solid companies got dragged down, too.

In the long run, demand for high quality ultra-deepwater floaters is strong and the market remains lucrative. This is exactly why some of the fundamentally stronger drilling contractors appear cheap and ripe for a takeover. Below is a snapshot of the major players in the offshore drilling industry and how they compare against each other.

Based on these comparisons, below are three takeover prospects that I believe are trading cheaply given their solid fundamentals.

Atwood Oceanics: This Houston-based driller has an average fleet age of less than 5 years. Of these, six are ultra-deepwater, or UDW, rigs with an average age of less than 3 years. Additionally, all rigs are contracted except the two UDWs that are yet to be delivered later this year. With an EV/EBITDA ratio of only 5.6, it looks comparatively cheaper than its peers given its relatively low percentage of debt (see table above). With a decent backlog and no exposure to risky projects, Atwood is definitely on the cheaper side. Potential acquirers might be bigger offshore drillers looking to upgrade their fleet by going for Atwood, rather than buying totally new rigs.

Diamond Offshore: While Diamond Offshore has an aging fleet with an average rig age of 24 years, its balance sheet seems solid. It has the lowest debt-to-equity ratio among its peers (see table above). What sets Diamond apart is its disciplined spending. The company has an optimal mix of jackups and floaters. With an EV/EBITDA of 5.0, the market still values Diamond Offshore higher than Transocean and Ensco for its ability to earn a profit. Diamond's older, lower-priced rigs could have a greater opportunity for being contracted if the current environment of low oil prices persists, thus making it an excellent candidate for a potential takeover.

Rowan Cos.: Rowan has 4 UDW rigs, one of which is under construction and the other three less than a year old. Of its 30 jackups, 19 are high-specification rigs suitable for drilling in harsh climate conditions, such as Norway and the Arctic region. Half the fleet has contracts expiring only beyond 2016. From a financial standpoint, it's 60% debt-to-equity ratio is highly impressive (see table above), the second best among its peers. At a trailing EV/EBITDA of 6.6, the company looks cheap when compared against the likes of debt-laden companies such as Seadrill and Pacific Drilling. Rowan's return on assets seems low because it is yet to generate a significant return on its newbuilds.

Foolish takeaway
All three companies have distinct advantages from an operational standpoint. However, attractive balance sheets with low debt set them apart from the rest. While Atwood, Diamond, and Rowan have lost about 45% of their market capitalization's, the rest had their market caps shaved off by 50% to 75% primarily due to significant leverage. Investors should keep an eye on these three companies and consider adding them to their watchlists..