Is there really any value left in the old-line retailer's buildings and land?

It looks like long-suffering Sears Holdings (SHLDQ) shareholders may finally have their investment thesis realized as the troubled department store operator moves to create a real estate investment trust.

It's been almost an article of faith among Sears bulls that the chain's real estate was the key to unlocking the value inside the stock. After years of watching chairman and CEO Eddie Lampert dismantle the company bit by bit by selling or spinning off valuable assets, it's become something of a self-fulfilling prophecy. Other than a few brands like Diehard, Kenmore, and Craftsman, virtually the only thing of value remaining in the company is its land and buildings.

So the announcement that Sears plans to raise more than $2.5 billion by selling some 254 Sears and Kmart stores to a REIT it created and then lease them back was the culmination of a long-held hope. Yet despite the stock initially jumping almost 12% on the news, it actually closed a nickel lower that day, suggesting even the most ardent bulls understand Sears' weak future prospects.

What will be left?
Seritage Growth Properties was set up by Sears to receive the properties and will finance the purchase in part by selling stakes to Sears shareholders through a rights offering. The Wall Street Journal reported that Lampert and his ESL Investments hedge fund, which together own half of Sears' stock, will take their full allotment in the REIT.

In addition to selling properties to the REIT, Sears also entered into a joint venture with mall operator General Growth Properties to contribute 12 stores located in the latter's malls in exchange for a 50% ownership stake and $165 million in cash. While Sears will continue to operate the stores, it intends to eventually sell its half of the JV to Seritage.

A still shaky foundation
The financial maneuvers come as sales continue to drop at the retailer and vendors grow increasingly nervous about the ability of Sears to pay them. Last month, Sears agreed to accelerate payments to its suppliers to keep the goods flowing. It will now pay bills in as little as 15 days, instead of the more typical industry standard of 30-60 days.

While it used the opportunity to extract better discounts for itself, this move hurts Sears' available liquidity. That's a problem as Sears has been burning through cash, leaving it with just $250 million in the bank and some $800 million available through a revolving credit facility at the end of its most recent fiscal year. 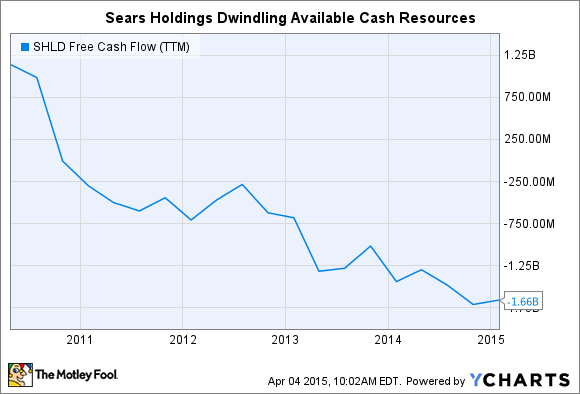 A hamstrung future
The continued hemorrhaging of cash is no doubt what spurred the idea of creating the REIT. But that creates a whole new set of problems for Sears.

By shedding real estate from its balance sheet, Sears also hamstrings its ability to raise money. Analysts note that many of its financial transactions have been predicated on the value of the real estate it owns. Of course, Sears will still own a few hundred other stores, but many of its stores have been performing poorly.

That means investors will need to focus more closely on Sears' ability to continue as a retail operation. Anyone who's been watching Sears over the past few years knows it's in terrible shape -- not least because Lampert chose financial engineering tactics like creating a REIT instead of investing in his stores, which he deemed unnecessary. 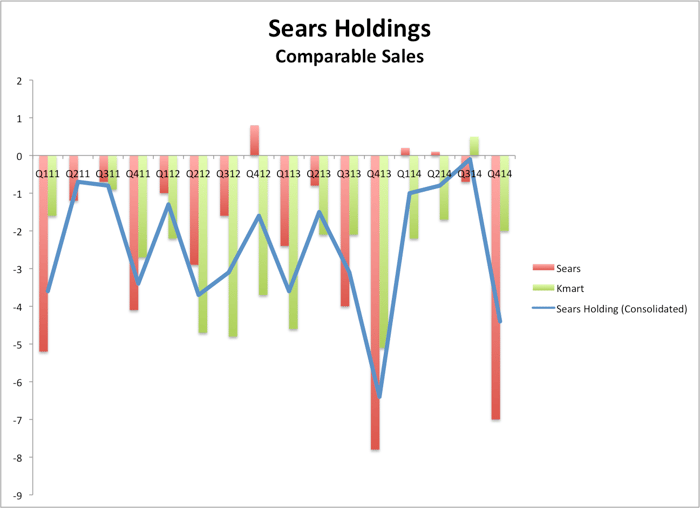 Still in freefall
Comparable store sales fell 2% at the Kmart division and plunged 7% at Sears' namesake stores last quarter. Overall revenue dropped 15% in the quarter. While that was due in large part to spinning off the Lands' End division and store closures, it points to the problem Sears faces as it has fewer and fewer options to generate sales.

In addition to Lands' End, over the years Sears has shed Orchard Supply and Sears Hometown & Outlet Stores, reduced its stake in Sears Canada, and contemplated separating from its automotive business.

While almost three quarters of Sears' sales are coming from its Shop Your Way membership loyalty program members -- up from over half in 2012 -- that program's growth has apparently peaked. Sears remains a retail operation in serious decline.

Creating a real estate investment trust to inject more cash into the business does nothing to make the stores a destination for shoppers. And it may just make it more difficult for Sears to function if the declining asset base dries up available credit.

Sears Holdings and Eddie Lampert may be cashing in on the retailer's real estate, but it doesn't mean investors will benefit as well. As a result, its stock will remain a very risky investment.

Follow Rich Duprey's coverage of all the retailing industry's most important news and developments. He has no position in any stocks mentioned. The Motley Fool has no position in any of the stocks mentioned. We Fools may not all hold the same opinions, but we all believe that considering a diverse range of insights makes us better investors. The Motley Fool has a disclosure policy.